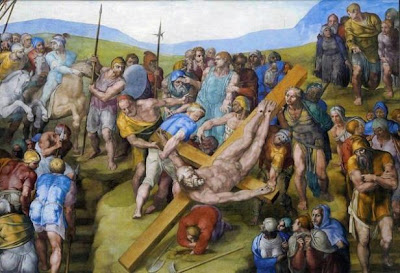 Michelangelo spent most of his life on a massive guilt trip. When he painted The Crucifixion of St. Peter in 1550 (pictured), he inserted not one, but two self-portraits. To the left of the martyr, a young Michelangelo stands beside a soldier gesturing to the cross, as if Michelangelo were responsible for what was happening for his years of following the pagan ideals of beauty over the glory of God. To the right of the martyr, an old Michelangelo stands disconsolate, realizing the cost of his embracing God over the god of beauty too late. Robert Snyder’s 1989 film Michelangelo: Self-Portrait, finally available on DVD from Microcinema, takes us along this long guilt trip as he presents these and many more self-portraits in vivid detail along with Michelangelo’s own self-portrait in words from his diaries and poems. In this film we step inside the mind, heart, and soul of a titan of the Renaissance and shed light on the long shadow he continues to cast on our culture. Please come over to Picture This at Big Think to read more of "Guilt Trip."


[Many thanks to Microcinema for providing me with a review copy of Robert Snyder’s film Michelangelo: Self-Portrait.]
Posted by Bob at 8:43 PM