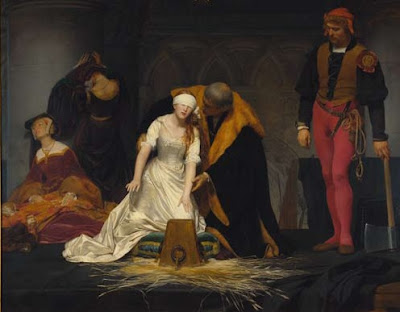 In the classic Western film The Man Who Shot Liberty Valance, James Stewart’s character confesses that he wasn’t a hero only to hear the newspaper man he’s confessed to respond, "This is the west, sir. When the legend becomes fact, print the legend." When Lady Jane Grey met her end on the executioner’s block in 1554 after once serving for nine days as the Queen of England, the facts of her death soon became a legend of martyrdom. Nearly three centuries later, French artist Paul Delaroche revisited the legend in his 1833 painting The Execution of Lady Jane Grey (pictured), which became the sensation of the 1834 Salon exhibition. In Painting History: Delaroche and Lady Jane Grey, the National Gallery of Art in London reexamines that moment in history when a French artist used the legend of an English monarch to say something both about art and about French society in the nineteenth century. Please come over to Picture This at Big Think to read more of "Print the Legend."

[Many thanks to the National Gallery of Art in London for providing me with the image above and other press materials for Painting History: Delaroche and Lady Jane Grey, which runs through May 23.]
Posted by Bob at 10:23 AM

"...1833 painting The Execution of Lady Jane Grey, which became the sensation of the 1834 Salon exhibition". I wonder why. The French had seen many beautiful and realist paintings before, so were they blown away by Delaroche's techniques? Or was the content matter pleasing to them in some way? Thanks for the link,