Is Dura-Europos the Missing Link of Ancient Art History? 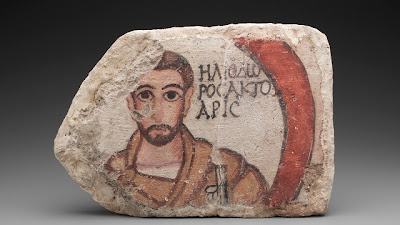 By the time the Persians destroyed the Roman military garrison at Dura-Europos in 256 AD, the city high above the Euphrates River existed for almost six centuries since its founding by one of Alexander the Great’s generals. A cosmopolitan city standing between Syria and Mesopotamia and, therefore, at the crossroads of politics, commerce, cultures, and religions between the Mediterranean and the Near East, Dura-Europos disappeared from view, buried by time until rediscovered in 1920. In Edge of Empires: Pagans, Jews, and Christians at Roman Dura-Europos, which through January 8, 2012 at the Institute for the Study of the Ancient World, that city lives again and offers a snapshot of how the people in that time and place viewed their world and themselves. The art of Dura-Europos, sometimes called “Durene Art,” fills in an important “missing link” of art history—the elusive time known as Late Antiquity, or the gap from the third to the seventh centuries when Classical Antiquity disappeared and the Middle Ages, formerly known as the “Dark Ages,” emerged. By shedding light on how the glory of Rome faded into the shadows of the murky Middle Ages, Edge of Empires provides the final piece of a long-incomplete puzzle. Please come over to Picture This at Big Think to read more of "Is Dura-Europos the Missing Link of Ancient Art History?"

[Many thanks to the Institute for the Study of the Ancient World for providing me with the image above from and a review copy of the catalog to Edge of Empires: Pagans, Jews, and Christians at Roman Dura-Europos, which runs from September 23, 2011 through January 8, 2012.]
Posted by Bob at 6:52 PM

Missing link? No. But it is a sharp lesson to historians who think they know it all, already.

This should be a lesson in academic humility to all historians!

The young man's name in the photo is Heliodoros by the way, i.e. Gift of the Sun in greek.