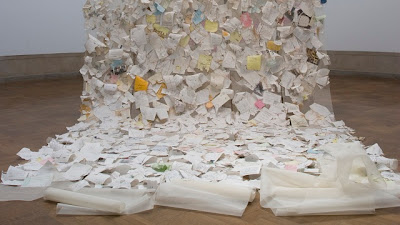 On the morning of September 11th, 2001, artist Elena del Rivero was in her native Spain, far away from her second home in New York City. When the towers fell, her studio on Cedar Street, directly across from the World Trade Center, filled with the debris from the disaster. For the next five years, del Rivero meticulously and meditatively worked her way through those fragments to create [Swi:t] Home: A CHANT, 2001-2006, a unique memorial to that unforgettable day to be exhibited at The New Museum on the 10th anniversary of the attacks. del Rivero weaves the stuff of horror into the stuff of thought and beautifully renders a focal point upon which we today can reflect upon that sad day as well as the days ahead of us. Please come over to Picture This at Big Think to read more of "Picturing 9/11: Elena del Rivero at The New Museum."

[Many thanks to The New Museum for providing me with the image above and other press materials for the exhibition of Elena Rivero’s [Swi:t] Home: A CHANT, 2001-2006, which runs until October 2, 2011. Please note that admission is free to The New Museum on September 11th.]
Posted by Bob at 7:11 PM