Picturing 9/11: The Mythology of Superheroes 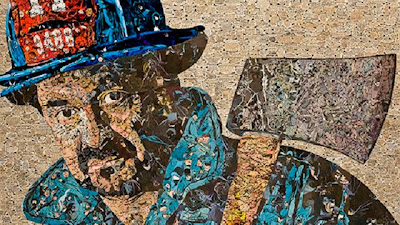 One of my favorite post-9/11 images came from the brush of comic book artist Alex Ross. Ross’ painting of Superman looking up at crowd of first responders and saying “Wow” encapsulated perfectly for me who the real heroes were. The giants who died while trying to save others as well as those who came to pick up the pieces afterwards dwarf the “Man of Steel.” In Supermen–An Exhibition of Heroes, British artist Ben Turnbull shrinks comic book heroes even more in order to form collage portraits of firemen and policemen (such as Hero III above) to honor the memory of 9/11 by celebrating the everyday heroism of these men and women. By mingling kitsch and tragedy, Turnbull turns ones attention to the mythology that we’ve wrapped around the idea of 9/11. Please come over to Picture This at Big Think to read more of "Picturing 9/11: The Mythology of Superheroes."

[Many thanks to Eleven and the artist Ben Turnbull for providing me with the image above and other press materials from Supermen–An Exhibition of Heroes, which runs through October 22, 2011.]
Posted by Bob at 7:08 PM