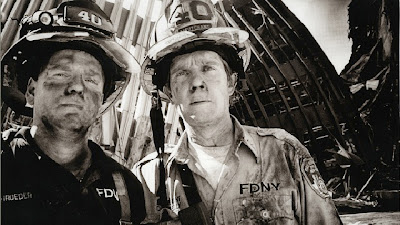 Just a few weeks after September 11, 2001, the owner of a vacant storefront on Prince Street in Soho taped a picture of the lost World Trade Center in the front window. The desire to remember and understand what had just happened in pictures soon led to a call for submissions from those who had photographed something from the attacks and their aftermath. By Christmas, more than 1,500 photographers—amateurs and professionals—had submitted over 4,000 images to the exhibition that came to be called here is new york. Even more amazingly, more than a quarter of a million viewers came to Prince Street to see them. Ten years later, the Southeast Museum of Photography reunites some of those images in the exhibition A Second Telling. These photographs of 9/11, like so many from that time, demonstrate the seemingly endless capacity of photography to capture both tragedy and heroism and to preserve those qualities for posterity. Please come over to Picture This at Big Think to read more of "Picturing 9/11: Photography, Tragedy, and Heroism."

[Many thanks to the Southeast Museum of Photography for providing me with the image above and other press materials from their exhibition A Second Telling, which runs through October 2, 2011.]
Posted by Bob at 6:37 PM