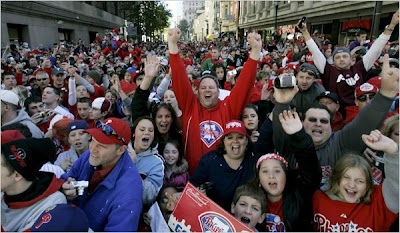 I’m not expecting a big parade, like the parade for your World Champion Philadelphia Phillies (above), but I do want to humbly point out that today is the second anniversary of the beginning of Art Blog By Bob. Two years ago I began surfing the web for a blog that talked about art history and museums and couldn’t find what I was looking for, so I decided to take the plunge and write it myself. Two years and about a thousand blog posts later, Art Blog By Bob has found its own niche in the art blogging world and a nice little audience of faithful readers. Thanks so much to everyone who checks in here every day or so to bear witness to my obsessions. Enduring my bad puns alone will ensure you less time in purgatory.

I’ve come a long way, baby, in these two years. Most publishers and museums freely provide me with materials for review, no longer scoffing at bloggers like some lower form of media life. Of course, there remain a few holdouts, but I can’t complain. Writing on this blog has given me the opportunity to read books I would never have known about, attend previews of exhibitions I normally wouldn’t have, and interact with like-minded art lovers virtually to a degree that physical distance previously made impossible. I’ve sold my writing to a print arts magazine, been invited to write an introduction for another book (more on that later), and even begun running paid advertisements, so the days of a dozen hits seem like just a bad dream. Most importantly, my work on this blog has inspired me to make a major life change, the details of which I can’t divulge right now but will when the time is right.

I recently attended a press preview and was taken aback at the level of jadedness of the mainstream media representatives. One newspaper writer went so far as to ask “Who cares?” right out loud, having barely swallowed the free lunch the museum had provided. I’ll most likely never make a living writing about art. If that’s the price I have to pay to remain an art amateur, a true lover of art in the Latin “amat” sense, then I’m more than willing to pay it.

I’d never be able to keep up this hobby without the love and support of the amazingly beautiful and talented Annie, who keeps me sane when the world tries to render me otherwise. Many of my blogged rants begin as rants beset upon her first and comprise just a small subset of the wide range of ranting with which I fill a normal day. Thanks, too, to Alex, who keeps our lives filled with joy and wonder and teaches me more about myself every day.

Last year when I hit my one-year anniversary, I wondered whether I could last another year. I was in a very Beckett-esque “I can’t go on, I’ll go on” state of mind. Now, even with the economy in tatters, I’m much more hopeful about life, art, politics, and even the upcoming baseball season, so I can see no end in sight for this blog. I may get that parade yet…
Posted by Bob at 12:01 AM

Congratulations! I visit almost every day to learn something new, and appreciate that your blog is here. I am an amateur, too, but a better educated one because of your blog.

Keep up the great work!

Congratulations! I also enjoy the posts

Since recently finding your blog, I have visited it again and again. Congratulations on a two year anniversary!

How have you built up readership for your blog? I also have an art history blog and am constantly looking for new ways to reach my target audience. Any suggestions?

Thanks for this wonderful blog!
I am an art history major and I check in daily.
I love that you write about the very famous like Michelangelo as well as the obscure, like the Australian artist you wrote about a few days ago.
And, as an "amateur," you provide just as interesting and accurate information as any established professor I've heard!
Keep up the great work!

I can't believe that it's already two years. Thank you for all the great posts! And best of luck with the major life change.

I am really excited to find your blog for the first time and will bookmark to return to again and again. I'm intrigued by the posts I've read so far, and happy to find this resource for fueling my art history seduction. It's been 13 years since my formal art education ended (in my late forties then) but I've never lost my lust for more information. Adding your blog to my life is a fine way to begin this week.