Portraits of the Artist 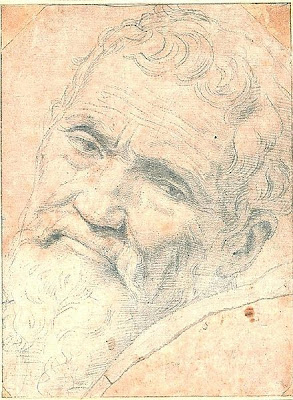 In the room the women come and go
Talking of Michelangelo.

--From The Love Song of J. Alfred Prufrock by T.S. Eliot

When T.S. Eliot wanted to capture the banality of “cultured” parlor conversation, he could think of no better example than society ladies blathering on about Michelangelo. Born March 6, 1475, Michelangelo has fallen victim to celebrity perhaps more than any other classic artist. Charlton Heston’s anguished portrayal of the artist in the melodramatic 1965 film The Agony and the Ecstacy cemented his reputation as more agony than ecstacy in the public mind. It’s hard to imagine Michelangelo ever smiling. All the portraits, such as the chalk portrait of Michelangelo by Daniele da Volterra (above), show a sad, brooding genius fretting over his latest work (or all his lingering incomplete works in his wake). da Volterra’s name remains linked with Michelangelo’s forever thanks to the Council of Trent’s decision that the nudity of Michelangelo's The Last Judgment fresco in the Sistine Chapel had to go, one way or another. Faced with the alternative of the destruction of his teacher’s last masterpiece, da Volterra agreed to paint clothes and fig leaves over the nude figures that remained for centuries, obscuring Michelangelo’s original intent. Over the centuries, popular culture has obscured Michelangelo’s original intent far worse by deifying him beyond the reach of mortals. The man who claimed that his only secret was hard work suddenly became a living cipher, shrouded by the majesty of his own talent. 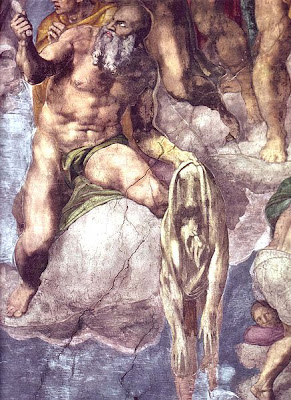 It’s truly interesting that Michelangelo, perhaps history’s finest artist, may also be history’s finest gay artist. The definition of homosexuality is difficult to pin down when talking about different cultures and eras, but Michelangelo most likely was a homosexual. In a culture that still stigmatized homosexuals and surrounded by churchly patrons who could ruin him overnight, Michelangelo had to tread lightly when it came to affairs of the heart, but he allowed himself moments of freedom in his art. As Rabbi Benjamin Blech and Roy Doliner pointed out in The Sistine Secrets: Michelangelo’s Forbidden Messages in the Heart of the Vatican (my review here), Michelangelo portrayed the men entering into Heaven in The Last Judgment kissing and hugging each other quite fervently. Also, Michelangelo placed a portrait of his lover Tommaso dei Cavalieri into The Last Judgment directly in Christ’s line of vision. da Volterra, in another of his “saving” alterations, repainted Cavalieri as an old man to throw off suspicion. When Michelangelo finally included his own portrait in The Last Judgment, he painted himself as St. Bartholomew's flayed skin (above). Depicting himself as a voided shell, Michelangelo may have been hinting at the façade his life had become in his inability to express his full personhood. 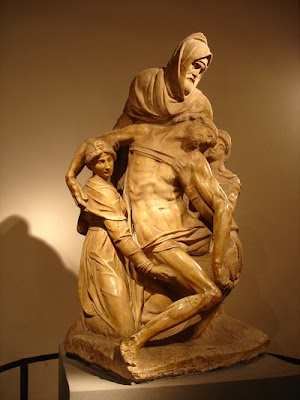 I remember visiting Florence and standing before Michelangelo’s Florentine Pietà (above, from 1550) in the museum connected to the Duomo and recognizing the figure standing at the rear as a self-portrait of Michelangelo. Michelangelo chose to portray himself as a member of the supporting cast, either Nicodemus or Joseph of Arimathea, rather than one of the A team of apostles or saints. Michelangelo may have sculpted this group, along with several others at the same time, for his own tomb. Although Michelangelo is now known as one of the great individual geniuses of Western civilization, he chose as his epitaph a group portrait in which the individual figures are closely bound together, unable to separate from one another without all of them falling down. It is as if Michelangelo reunites himself with humanity after his greatest triumphs separated him from the crowd. Many accounts exist of the close ties Michelangelo had with his assistants, who shared their expertise in fresco and other techniques when Michelangelo himself was still learning. The Florentine Pieta may be Michelangelo’s most personal work in that it shows him as he wanted to be seen—as a person among people, simply wanting to belong.
Posted by Bob at 12:01 AM