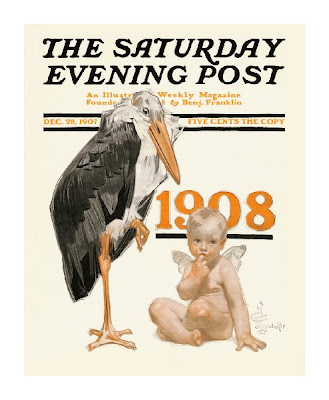 For Americans with an historical awareness of the visual roots of our culture, the Saturday Evening Post is the mother lode of lore. The look of our celebrations, from Mother’s Day to the Fourth of July to Thanksgiving to Christmas to New Year’s, all seemingly took their cue from the Post. And no artist’s name is linked with the Post’s power to shape the American psyche as is that of Norman Rockwell. Yet, the Post influenced society well before Rockwell’s first published cover in 1916 thanks to a Rockwell’s predecessor—J.C. Leyendecker. Born March 23, 1874 in Germany, Leyendecker came to America with his family at the age of eight in search of a better life. Leyendecker not only lived the immigrant’s American dream, but also gave it visual life. In December 1907, Leyendecker painted New Year's Baby 1908 for the Post (above), beginning a tradition of New Year’s Baby covers that would extend into the 1940s, when even the New Year’s Baby would join the war effort and take a swing at a surreal swastika beside him. Symbols such as the Baby New Year seem so timeless to us today that it’s important to recognize the people such as Leyendecker who created such enduring images. 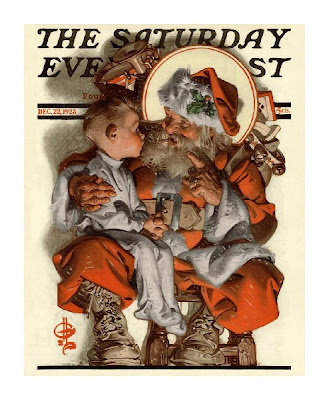 As a native German, Leyendecker must have absorbed many of the Christmas traditions of Germany that he and so many other immigrants brought over to America. We like to think of Christmas as a Victorian and Dickensian creation, but the real roots of modern Christmas traditions reach back to Germany, the homeland of Queen Victoria’s beloved Albert, whose death gave birth to the Victorian Christmas through Victoria’s great grief. When you look at Leyendecker’s Christmas covers for the Post, such as Santa's Lap (above, from 1923), it’s easy to think that he’s borrowing from Rockwell, unless you realize that the time line works the other way around. Rockwell certainly belongs in the upper echelon of great American illustrators and created his own share of original characters, but when it came to Christmas and many other bits of Americana, he often followed the lead of Leyendecker. Leyendecker created much of the visual language of Americana to which Rockwell later gave his unique flavor. 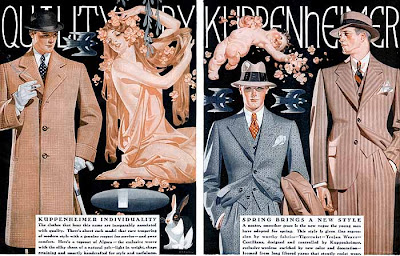 In addition to the Post, Leyendecker illustrated books and enjoyed a lucrative career in advertising. Leyendecker’s advertisement for Kuppenheimer’s men’s clothing (above, from the 1920s) shows the dapper look of the Roaring Twenties with fascinating unreal touches such as the lithe nymph clad in gossamer and the cherub above the young man’s head. The lady and cherub recall Leyendecker’s fascination with the Art Nouveau works of Alphonse Mucha that Leyendecker encountered as a young student in Paris. Today, many people search such advertising for hidden clues to Leyendecker’s homosexuality, imagining that the women fawning over the devastatingly handsome men in their sartorial splendor are actually “self-portraits” of Leyendecker. Leyendecker lived the raucous life of the Roaring Twenties and suffered the agony of the subsequent Crash of 1929 and the Great Depression. Leyendecker’s 1943 Baby New Year fighting the Nazis was his last cover for the Post. The Golden Age of American Illustration had passed, leaving only enough work for stars such as Rockwell. Leyendecker died in 1951, at the beginning of a decade that embraced Americana like no other had before, but with the name Rockwell rather than Leyendecker as their chief mythmaker.
Posted by Bob at 12:01 AM

"Leyendecker’s advertisement for Kuppenheimer’s men’s clothing shows the dapper look of the Roaring Twenties with fascinating unreal touches such as the lithe nymph clad in gossamer and the cherub above the young man’s head. The lady and cherub recall Leyendecker’s fascination with the Art Nouveau works of Alphonse Mucha that Leyendecker encountered as a young student in Paris."

That is fantastic. Imagine Mucha's turn-of-the-century Art Nouveau turning up in 1920s ads for gentlemen's suits. I don't know Leyendecker at all, but I admire this idea enormously.

many thanks
Hels
Art and Architecture, mainly