To Impressionism… and Beyond 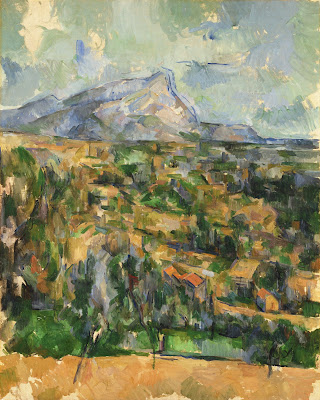 Father. Protector. Herald. Hero. Even God. Those are just a few of the labels heaped upon Paul Cezanne by those who followed in his wake and who comprise the “beyond” in the Philadelphia Museum of Art’s exhibition Cezanne and Beyond. In the catalogue, edited by PMA curators Joseph J. Rishel and Katherine Sachs, a star-studded cast of critics join forces to paint a broad portrait of the large shadow Cezanne cast over the twentieth century and still casts over our own twenty-first. As Max Beckmann explained in his 1948 “Letters to a Woman Painter,” Cezanne “really became the last old master, or I might better say he became the first ‘new master.’” As Rishel and Sachs explain in the opening essay, titled “The Making of an Exhibition,” the legacy of Cezanne swung between two poles—the “aloof” “Apollonic Cezanne… and a more mortal (but equally protean) creature, animating in very concrete ways artists right up to the present.” Cezanne and Beyond brings Cezanne down from the mountain (perhaps his beloved Mont Sainte-Victoire, above, from 1902) to mingle with his fellow mortals and great artists. From early devotees such as Matisse and Picasso to modern day followers such as Francis Alys and Sherrie Levine, Cezanne and Beyond emphasizes how great artists use other great artists as points of departure towards that undiscovered country of their own vision. 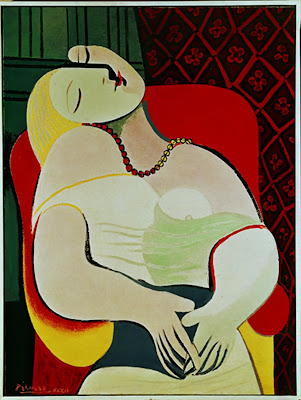 The catalogue features a useful chronology by Adrianne O. Bratis that combines the trajectories of Cezanne’s life and artistic afterlife with that of the other 18 artists discussed. Working through the series of births, deaths, and other landmarks of this cast proves a fitting introduction to the dizzying interplay between these artists, which leaves a tangled web that the essayists do not unweave but rather celebrate. Contributions by Robert Storr and Richard Shiff lay out the competitive landscape these artists faced off on. Addressing the lingering question of “modernism’s paternity” and offering Manet, Courbet, and Goya as candidates, Storr somewhat settles the issue by asserting that “there is no disputing that Cezanne was the quintessential modernist at the advent of its glory days.” Regardless of what we may think today, Cezanne was the man for cutting edge artists in 1907, the year of the grand posthumous exhibition that brought Cezanne’s work to a wider audience. Shiff then picks up the trail, describing Cezanne as “a piece of collective cultural property that successive generations shaped according to their needs, as they wrestled with their doubt.” Picasso sensed early on Cezanne’s powerful doubt but also his eventual self-assurance of vision. “In Cezanne,” Shiff writes, “Picasso perceived a life-anxiety he shared, while he overcame the art-anxiety that accompanied it.” When Picasso paints The Dream (above, from 1932), he “borrows” not only the red armchair of Cezanne’s portraits of Madame Cezanne but also Cezanne’s final arrival at an almost preternatural faith in painting the world as he sees it, regardless of what others think. “What forces our attention is Cezanne’s anxiety,” Picasso later said. “That’s Cezanne’s lesson.” As John Elderfield writes in his essay, “Picasso’s Extreme Cezanne,” Picasso saw “the fervent and troubled Cezanne” where most saw the “classical Cezanne.” Picasso humanizes Cezanne through shared fears then re-elevates him in his conquest of those fears. 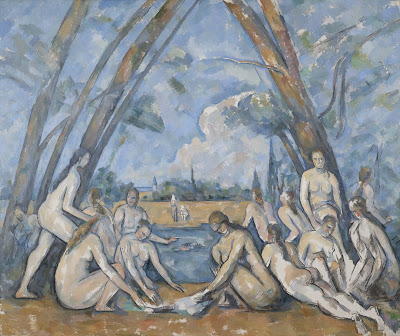 Elderfield sees Picasso’s Les Demoiselles d'Avignon as a specific response to Cezanne’s Large Bathers paintings (the PMA’s 1906 version above). “While capturing and enlarging the element of the grotesque in Cezanne’s figural groupings, [Picasso] also adapted their tone of melancholy introspection to his confrontational sexual display,” Elderfield writes, “infusing the coarse hedonism with a silent, unflinching, seemingly unending disquiet.” Just as Cezanne’s “disquiet” attracted Picasso, it set up Cezanne as a role model for other artists. Georges Braque, as John Golding shows, became a stoic in the vein of Cezanne after suffering wounds in World War I. When Arshile Gorky studied to become an artist with no instructor to guide him, Michael Taylor writes, “He aptly chose Paul Cezanne” as his model for what an artist should be and copied Cezanne’s works just as Cezanne had haunted the Louvre decades before in pursuit of excellence. Marsden Hartley was already an established artist when he made a pilgrimage to the places Cezanne had painted, immersing himself so deeply in Cezanne that he almost drowned his own art, Joseph Rishel explains in his essay. But Cezanne’s disquiet also repulsed at one point or another other artists such as Henri Matisse and Fernand Leger. Yve-Alain Bois dispels the “illusion” that Matisse adopted Cezanne from the very beginning, pointing out that most of Matisse’s adoring comments on Cezanne come in the 1940s and 50s. Even then, Bois writes, “the Cezanne that emerges in these relatively late statements [by Matisse] is one that has been tamed, converted into a coherent entity whose contradictions tend to be underplayed.” Christopher Green follows Leger’s self-deceptive personal timeline of Cezannism, which Leger claims ended in 1914 but Green and others see as extending well into the 1920s, seemingly beyond Leger’s control. The uniqueness of each artist’s response to Cezanne makes for a fascinating crazy quilt of influence that gives a more realistic (but less easily summarized) view of how artistic influence actually works. 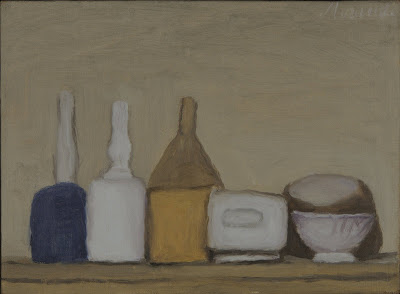 Another twist to the tale comes when the “beyond” of Cezanne and Beyond crosses international borders as well as time periods. The works of Liubov Popova serve to represent the influence of Cezanne in Russia, which didn’t begin until 1908 but soon “spread like wildfire in Moscow—faster, indeed, than anywhere else in Europe,” writes Albert Kostenevich. “Having rejected the traditions of the Renaissance, often in favor of a kind of artistic nihilism,” Kostenevich explains, “young Russian artists in the 1910s sought to base their art on the most contemporary foundations possible, and therefore, above all, they turned to Cezanne.” Hartley, Charles Demuth, and other members of the Stieglitz circle bring the gospel of Cezanne to American shores after the tidal wave of modernism of the 1913 Armory Show. In Italy, Cezanne’s influence became a political football of sorts kicked around by modernists such as Umberto Boccioni, Giorgio de Chirico, and Giorgio Morandi (whose Still Life, from 1947, appears above). In her essay, “For the Love, and Fear, of Painting: Cezanne, Morandi, and Italian Modernism,” Jennie Hirsh follows how Cezanne’s style became adopted by Morandi and accepted by Fascists between the wars, a context that led de Chirico to reject Cezanne primarily by association. Cezanne’s pictorial call to order became twisted into the Fascist call to social order, with Morandi’s still lifes standing in for the new political way of life. Again, Cezanne and Beyond takes you beyond the standard studies of Cezanne and his influence, here entering into the political arena. 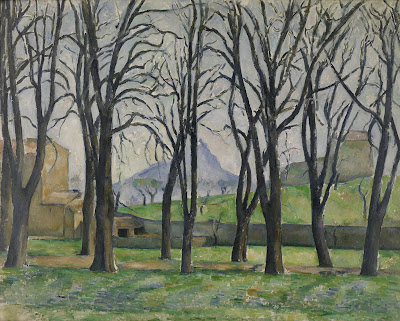 Perhaps most fascinating of all the individual artist essays are those dealing with the still-living artists Ellsworth Kelly, Jasper Johns, Brice Marden, and Jeff Wall. Each of these artists spoke with their essayists and described their personal relationship with Cezanne first hand. Kelly traced his infatuation with Cezanne back to an illustration of Cezanne’s Chestnut Trees at Jas de Bouffan (above, from 1885-1886) that Kelly pulled from an art history book he had received as a teenager. Cezanne’s painting contained all of the elements—“a tension between foreground and background, surface and depth, positive and negative space,” Kathleen Sachs writes—that would dominate Kelly’s own art. For Johns, “Cezanne’s nearly obsessive repetition of motifs in still lifes, landscapes, and figural scenes provided a significant precedent” for Johns’ maps, flags, and other oft-repeated subjects, Roberta Bernstein relates. For Marden, Cezanne’s motifs fascinate not in their repetition as much as in their disappearance. Both Marden and Cezanne take only the “energy” of the motif, Sachs writes, rather than simply reproduce it, emphasizing that “it is in the process of getting there that all their creativity occurs. They bring life to a painting by capturing the spirit of its making and letting that spirit work with them to complete it.” For Wall, a photographer and perhaps the most off-the-wall member of the Cezanne clan, Cezanne still offers something found nowhere else. Watching Cezanne “transform the legacy of the masters,” Jean-Francois Chevrier writes, Wall learns how “to adapt it to his own ambition” as well, including the legacy of Cezanne. 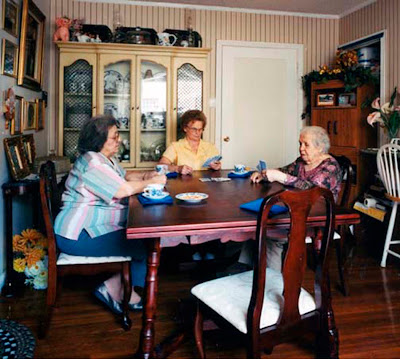 Seeing Wall’s Card Players (above, from 2006), an homage to Cezanne’s similarly named paintings, in the catalogue (and especially lit up in the exhibition space itself) is a jarring experience. You just don’t expect it. Cezanne and Beyond is all about defying expectations and jarring jaded viewers. Wading through the 500 plus pages of the catalogue is a daunting task but well worth it to get a fuller understanding of how complex Cezanne’s influence has been in the century since his death. I say “fuller” rather than “complete” because the biggest lesson of Cezanne and Beyond is that we are still in that “beyond” stage. “Beware of the influential master!” Cezanne himself warned, and it is this wariness of artists that keeps Cezanne’s influence from descending into copying and derivativeness. The quarrels artists continue to have with Cezanne keep him fresh and alive to today. Cezanne and Beyond maps the location of Cezanne’s (and any great artist’s) fountain of perpetual youth. From that source, Cezanne may truly go “to infinity… and beyond!”

[Many thanks to the Philadelphia Museum of Art for providing me with a review copy of the catalogue to the exhibition Cezanne and Beyond and for the images above.]
Posted by Bob at 12:01 AM

Cezanne has long been my favorite artist. Along with Ellsworth Kelly I too was inspired by "Chestnut Trees" at my home museum, the Minneapolis Institute of Arts. It's amazing how the planar elements of that painting translate into the more prominent planar emphasis of the art that came later.

I really liked the painting, the way gives me a feeling of peace that I have rarely, thanks for posting the blog, I like a lot like buy viagra