There are many tales of painter fathers influencing their painter sons, but not as many of painter fathers influencing painter daughters. Oscar-Raymond Bonheur, a journeyman painter but a fierce socialist, truly believed in the equality of the sexes and made sure that his daughter, Rosa Bonheur, had every opportunity than a son would have. Born March 16, 1822, Rosa praised her father’s progressive thinking. “To his doctrines I owe my great and glorious ambition for the sex to which I proudly belong and whose independence I shall defend until my dying day,” she wrote. Rosa Bonheur rose to fame primarily on the acclaim of one painting—The Horse Fair (above, from 1853-1855). Almost overnight she became not only a highly decorated artist but was also recognized (and perhaps pigeonholed) as the preeminent artist of animals in the nineteenth century. When other female artists struggled to find a place in the male-dominated world of art, Bonheur battled her way into the “boy’s club” and blazed a path for succeeding generations of female artists. 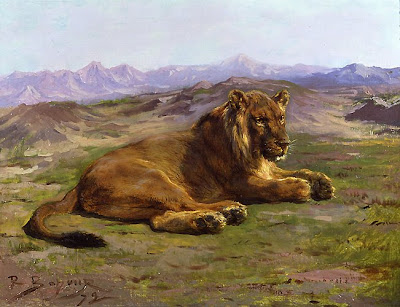 There’s a lot of George Sand in Rosa Bonheur. Like the great French novelist, Bonheur wore men’s clothing, cut her hair short, and even smoked cigars and cigarettes in public when such things were considered shameful. “But the suit I wear is my work attire, and nothing else,” Bonheur protested. “I was forced to recognize that the clothing of my sex was a constant bother. That is why I decided to solicit the authorization to wear men's clothing from the prefect of police.” Granted official dispensation, Bonheur cut an unusual figure in Paris social circles. The fierce independence her father instilled in her from the beginning continued to be her most powerful weapon. When the Franco-Prussian War began in 1870, the almost fifty-year-old Bonheur wanted to enlist to defend the country she loved. Bonheur is known for her horses primarily, and they do have their own wild energy, but I’ve always loved more Bonheur’s lions, such as Crouching Lion (above, from 1872). Painted around the same time as the Franco-Prussian War, Crouching Lion may be a Bonheur “self-portrait” of herself sitting on the sidelines, wishing that age and gender would allow her to get a piece of the action. 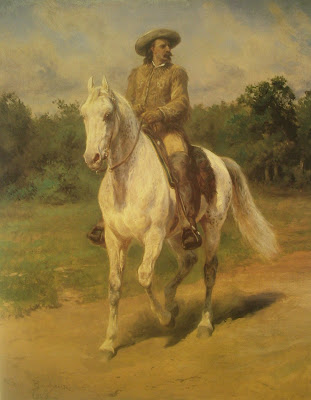 Bonheur’s dress and attitude unfortunately lead to a very modern question: was she a lesbian? Bonheur never married and lived with female friends for most of her life. Such evidence fuels speculation, but we just don’t know. Same-sex relationships in the nineteenth century just don’t fit neatly into our modern categories. Nevertheless, lesbian artists have embraced Bonheur as one of their own. Bonheur’s final companion was an American artist named Anna Klumpke. Anna and Rosa met while Rosa was in the midst of a blooming fascination with the American Wild West. In 1889, Bonheur saw Buffalo Bill Cody perform. She painted an equestrian portrait of Buffalo Bill that same year (above). Buffalo Bill represented a whole mythos of rugged individualism and brave new frontierism that clearly appealed to Bonheur, who lived an entire life as an individual living on the edge. Nearly half a century after The Horse Fair, Bonheur still used the horse as a symbol of the unbridled energy of the individual looking for a way to be free.
Posted by Bob at 12:01 AM

She has some great works.
I quite like the lion one.
She was also known as Marie-Rosalie Bonheur.