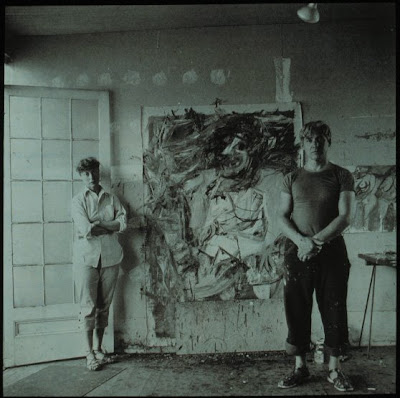 Abstract Expressionism quite rightfully has the reputation of being a manly man’s art movement. Jackson Pollock dripped, cussed, drank, and chain smoked his way to an early death and lasting fame. Handsome Willem de Kooning objectified women and even destroyed them in paint in his Woman series before his long slide into darkness due to Alzheimer's disease. Behind both these men, however, stood strong women artists—Lee Krasner married Pollock and Elaine de Kooning married and stood behind (and beside, above, in 1953) Willem. Born March 12, 1920, Elaine learned to love art from her mother, who took her to museums and gave her art books to study from. Elaine had already begun studying to paint when she met Willem in 1938 and became his student. Five years later, they were married, beginning a tempestuous marriage that would result in his work eclipsing hers as she sought out her own artistic space, eventually finding some success as an art critic while continuing to paint. Elaine painted in the same Abstract Expressionist style as her husband, but separated herself from his influence by seeking a softer, yet still highly expressive style.

One way Elaine separated herself from Willem and basically all the other Abstract Expressionists was in painting portraits in the Abstract Expressionist style. Elaine first painted works based on photographs of athletes, using the energy of the brushstroke to mimic the kinetic energy of athletic bodies in motion. She later moved on to painting “still” portraits that moved with painterly energy, including a portrait of soccer legend Pele. In late 1962, the Harry S Truman Library commissioned Elaine to paint a portrait of John F. Kennedy. Not satisfied with painting just one portrait of JFK, Elaine created a series of works, the largest and most colorful being that above (from 1963). Sadly, JFK was assassinated as Elaine was completing this portrait, a shock that left Elaine unable to paint for almost a year. Aaron Shikler’s official presidential portrait of the brooding JFK, painted posthumously, captures the sadness of his death, but Elaine’s portrait wonderfully captures the vibrancy and color of the living man, who embodied the hopes and dreams of so many during that exciting time. Elaine’s portrait seems almost unreal in its untainted state. It’s hard not to think of Kennedy’s death when thinking of him, but Elaine’s portrait serves as a stunning reminder of what once so brilliantly was. 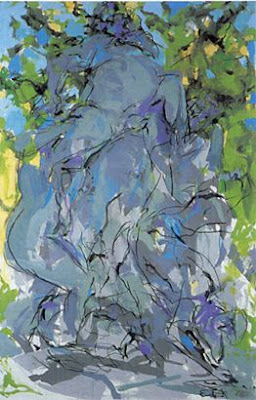 Elaine continued to paint almost to the end of her life. Bacchus #3 (above, from 1978) shows the continued energy of her brush even into her late 50s. As Willem became less capable of taking care of himself and his works, Elaine assumed the role of caretaker, ensuring that he and his art would not fall into ruin. Sadly, Elaine succumbed to lung cancer at the age of 70, the consequence of decades of chain smoking. Willem, deeply shrouded in dementia by that point, became the concern of their daughter, Lisa. Chaos and questions continue to surround Willem’s last years and last works, many of which may not actually be by his hand. It was as if once the support of Elaine disappeared, Willem could no longer stand. If it’s true that behind every great man there is a great woman, Elaine de Kooning was one of the greats of twentieth century American art.