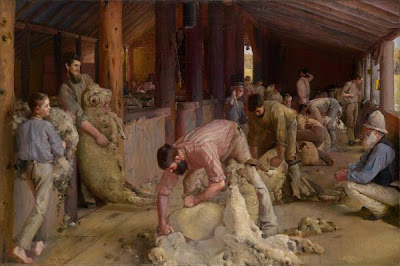 It’s one of the great ironies of art history that the “father” of Australian art isn’t even Australian. Born March 9, 1856, Tom Roberts came to Australia from England as a young boy after the death of his father. His mother struggled to keep the family together and Roberts went to work at a young age with a local photographer. Long hours and short pay instilled in Roberts a respect for the hard-working people of southern New South Wales, where the wool industry kept the local economy afloat. Roberts painted many scenes of these industrious, simple folk such as Shearing the Rams (above, from 1890), celebrating a subject many didn’t feel suitable for fine art. Roberts gets some of the actual details of the shearing process incorrect in this painting and others, but he does realistically depict the rugged dignity of work in a way that encapsulates the rough, callused history of Australia itself. Much like the Ashcan School working in America around the same time, Roberts rejected the idea of the powerful as fitting subjects for art and found the lives of everyday Australians a far greater source of material and inspiration. Also like the Ashcan School artists in America, Roberts recognized these everyday people as the true heart of his country. 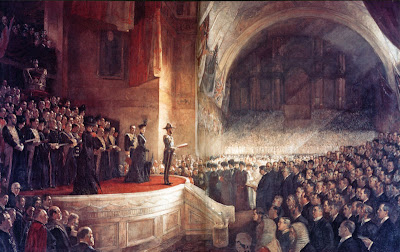 Roberts remains famous in Australia today, with a festival in his honor held every five years and his face appearing on the currency. Leaving England behind, Roberts whole-heartedly adopted his new country, which was still finding its place in the world as he established himself as a painter. Roberts witnessed the birth of his nation with the 1901 opening of the Parliament of Australia and painted it in The Big Picture (above, from 1902). In The Big Picture, Roberts demonstrates his “big picture” view of Australia, from the homeliest farms to the most grandiose halls of power. The meticulous care Roberts gives to each of the portraits in The Big Picture emphasizes his concentration on the human element of Australia’s development. Just as he gave dignity to the shearers in Shearing the Rams, Roberts gives humanity to these dignitaries, capturing the humanity of the moment out of fear that it could be lost in the pomp and circumstance of ceremony.


Today, Roberts’ greatest claim to fame is as a landscapist. Along with Walter Withers and Arthur Streeton, Roberts formed what came to be known as the Heidelberg School of Australian landscape painting. Following the example of the Impressionists, Roberts and his colleagues worked en plein air to create works such as Hobart, Tasmania (above, from the mid-1920s). Other artists had previously attempted landscape painting in Australia, usually following the conventions of European painting, but Roberts was among the first to recognize the differences of the Australian landscape and incorporate them into his art. Living down under, below the equator, Roberts worked under a different kind of light than his European equivalents, which illuminated a landscape itself far different than anything found in France or England. Roberts embraced this strange, still-new world and made it his own, painting works of art that helped shape Australia view of itself and still serve as a source of national pride.
Posted by Bob at 12:01 AM