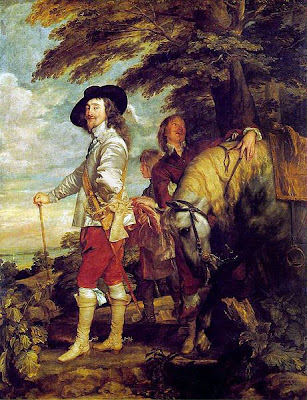 The Van Dyck and Britain exhibition currently at the Tate Britain rightfully places Anthony Van Dyck at the origin of the golden age of eighteenth century portraiture in England, the “father” of Reynolds, Gainsborough, Ramsay, and Lawrence. Born March 22, 1599, while his contemporary Diego Velázquez – aggrandized in paint Philip IV of Spain, Van Dyck depicted King Charles I of England and Scotland to his best advantage. Sensing the increasing weakness of the Catholic Church as the Protestant Reformation dragged on, European monarch seized the opportunity to employ the fine arts for propaganda much as popes had for centuries. Van Dyck’s Charles I of England at the Hunt (above, from 1635) shows the king in all his merciless glory, celebrating the murderous hunt with a sneer. Charles I subscribed to the idea of the Divine Right of Kings, that god-given right of royalty to the throne that no earthly power could deny. Charles I fought with anyone and everyone, including his own parliament. Popularity was not a priority. Van Dyck here lavishes on the king the brilliant brushwork he learned from Peter Paul Rubens, giving the mortal king an almost mythical sheen reserved for Olympic gods. Charles I, of course, believed it was his due.
During his reign it was almost as if Charles I courted controversy. He married Henrietta Maria of France, a Catholic, over the objections of parliament and the English people, who were weary of decades of religious strife tearing the nation apart. Van Dyck painting of Charles I and Queen Henrietta Maria with Charles, Prince of Wales and Princess Mary (above, from 1632) stood as a big middle finger to the country. Charles I set Van Dyck up as the official court painter and provided him with a studio close enough that the royals could walk back and forth from their regular sittings. Van Dyck became absurdly rich by the standards of artists of the time and even scored a knighthood for his work. Soon the appeal of being painted by Van Dyck spread to the rest of English nobility and Van Dyck became the go-to artist for those looking to immortalize their social standing. 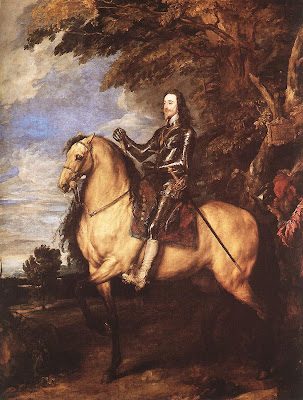 Making Charles I look good was literally a tall order. To create the illusion of grandeur for a king that stood less than five feet tall, as Charles I did, Van Dyck resorted to many tricks, the most notable of which was the equestrian portrait. Van Dyck’s Charles I on Horseback (above, from 1635) raises the king up while lowering the sights of the viewer. The low horizon makes us feel as if we’re standing at stirrup level, craning our neck up at a towering monarch rather than a diminutive despot. Charles I’s antics eventually led to the English Civil War and the Cromwellian Interregnum. After a series of battles, Charles I was captured and tried and literally cut down to size—headfirst. The head that Van Dyck painted over and over fell victim to regicide. After Charles II regained the throne in 1660, Charles I was canonized by the Church of England, but Van Dyck had canonized him long before.
Posted by Bob at 12:01 AM