And All That Jazz 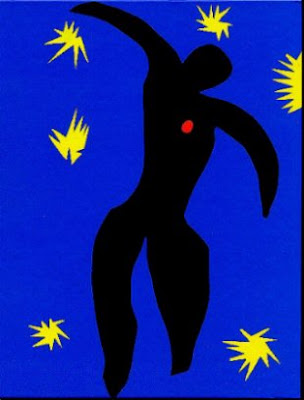 I always find an artist’s final works to be just as interesting, if not more so, than his or her first masterpieces. How an artist finishes seems to me as important as he or she begins. If you’re Andrew Wyeth (still alive, last time I checked), you stay the course for almost a century with your powers mostly intact. Renoir asked for brushes to be strapped to his wrists when his arthritic hands could no longer hold them. Willem De Kooning battled through Alzheimer's disease to create works of great emotion and style before slipping away. When Henri Matisse reached his seventies, infirmities made it difficult for him to hold a pencil or brush. Born December 31, 1869, Matisse refused to stop making art and began creating images by cutting out colored pieces of paper and arranging them on other colored pieces of paper. Using such childhood means, Matisse reached great artistic ends, eventually assembling in 1947 an entire book of such works he titled Jazz. Like a great jazz musician, Matisse improvised on themes from earlier in his career and created wholly new works, such as Icarus (above). Unable to paint or sculpt, Matisse’s artistic spirit grasped onto a new medium when his fingers could no longer grasp the old ones. 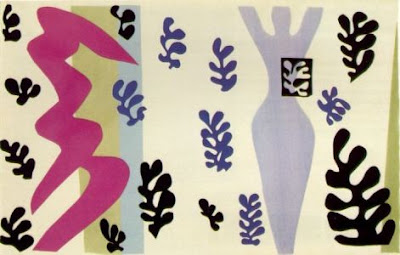 Even Jazz’s images of implied danger, such as The Knife Thrower (above, from 1947), don’t seem frightening or edgy in any true sense. The softness of Matisse’s cutouts, with their beautiful design and saturated colors, could lead you to think that his Jazz belongs to the Kenny G school. Matisse may be smooth, but he’s not generic, snoozy “smooth jazz.” Instead, Matisse’s smoothness is that of Coleman Hawkins, Lester Young, Ben Webster, or any of the other great jazz saxophonists who could caress the old standards and tease out untapped resources of melody without resorting to unnecessary pyrotechnics, even though they could blow the roof off when they wanted. When Peter Saul announces that he never wants his art to become “furniture,” he points a finger directly at Matisse, who famously announced that he wanted his work to be as soft as an easy chair. Certainly there’s a place and time for Saul and others to challenge the status quo, but Matisse addresses the need to find a moment of repose, to simply sit and allow life and art to wash over your senses before taking on the next project. 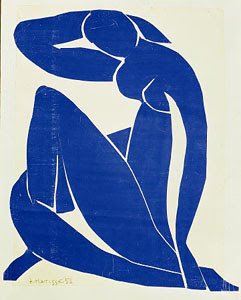 In 1905, at the beginning of Matisse’s career, when works such as Woman with a Hat and The Green Line made him notorious, the public literally called him a beast, or Fauve in French, thus giving a name to the new style of bold, non-natural color. It seems quaint that people were once shocked by the idea of a green stripe running down a woman’s nose. Eventually, Matisse settled into a comfortable groove and gained acceptance, rivaling Picasso for the title of the greatest living artist of the twentieth century. Once Matisse found the potential for cutouts, he continued in that style for most of his remaining years. In Blue Nude II (above, from 1952), Matisse returned to the epic nudes of his earlier years, but, again, smoothes out the final rough edges and delivers one final variation on a great theme. With only a series of blue shapes cut from a larger piece of paper, Matisse constructs an entire sculpture of color with discernible shape, volume, and weight. It’s pure magic, like a great musician taking a reed and his own breath and blowing a solo that sinks down to the bottom of our souls.
Posted by Bob at 12:01 AM

Great post. Yep, Andrew Wyeth is still kicking. He turned down an interview with me last year for the Myartspace Blog, but I did interview Bo Bartlett-- one of his close students. I'll comment on this topic again tonight once I put more thought into it.

You continue to offer valuable criticism, Bob. This blog, when I visit, never disappoints. --Cliff

Don't know why that was tagged "anonymous" (thought I was logged in). --Clifford Meth

Matisse's later works are some of my favorites. You are so right not to liken his "jazz" to Kenny G (if you even want to call that jazz). Smooth need not mean insipid. Matisse, during this period, was bold and vibrant.

The resolve and determination of artists to continue creating art, in spite of poor health, old age, and disabling conditions, is just incredible. Never knew that about Renoir.