In the New York City art scene of the 1950s, artists joked that you were either with the “red mountain,” Harold Rosenberg, or with the “green mountain,” Clement Greenberg. Born January 16, 1909, Greenberg helped set the standards of taste for post-war America like few other critics. A failed painter himself, Greenberg (above, photographed in 1972 by Arnold Newman) built an entire system around the idea that traditional ways of painting, including painting recognizable subject matter, were not only passé but dangerous for society. After witnessing the way the Nazis commandeered art and culture for nefarious, propagandistic purposes in World War II, the Jewish Greenberg sought to turn the tide and incite a new way of painting that stressed the individual and freedom over the state and state-enforced control. Such a goal neatly survived the transition into the Cold War period by replacing the fascism of the Nazis with the Communism of the Soviet Union. America, Greenberg asserted, as the beacon of freedom for the world, would also illuminate the path to the next stage in the evolution of art.
For Greenberg, the next stage came in the person of Jackson Pollock and Abstract Expressionism. Works such as Pollock’s Lavender Mist: Number 1, 1950 (above) epitomized everything that Greenberg wanted for art and culture. While Rosenberg championed Willem de Kooning, Greenberg hitched his wagon to Pollock’s star. Greenberg and Pollock rose together into the cultural firmament. The two names became almost synonymous. Greenberg worked with the U.S. Government to organize international exhibitions of Pollock’s art to counteract the ideological spread of Communism during the 1950s. Unfortunately, Pollock’s messy personal life and chaotic psyche clashed with the fastidious habits of Greenberg. In the movie Pollock, Jeffrey Tambor captures that aspect of Greenberg’s personality beautifully. Pollock the man always interfered with Pollock the abstraction for Greenberg, who wanted an idea free of all baggage. 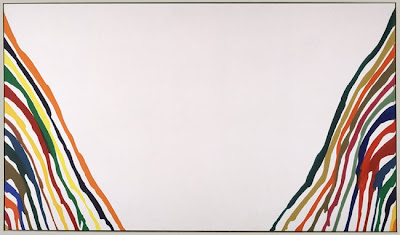 Greenberg seemingly found this baggage-free type of painting in the next style he championed, which he called Post-Painterly Abstraction but is also known as Color Field painting or Lyrical Abstraction. Many artists in the 1960s left behind the angst of Pollock and took a cooler approach to art that reveled in color and shape with no reference to subject matter, including their own mental state. Morris Louis’ Alpha-Pi (above, from 1960) exemplifies this person-less, subject-less style. Greenberg swayed the taste of contemporary art even further towards abstraction, leaving contrary-minded artists far behind and devoid of any chances of fame. Furious at Greenberg’s stranglehold over the artistic dialogue, Peter Saul painted the critic in 1971 as Clemunteena Gweenburg. Saul’s feminized caricature sits on a palette marked “Abstwack Arts” with a paintbrush extending from his (female) genitals that reads “Hy-Brow Art.” Saul and others saw Greenberg’s move to abstraction not as an escape from fascist circles but as an escape from responsibility to address the wrongs of capitalism and American “democracy.” In their view, Greenberg’s belief in the American way blinded him to its wrongs and drove him to blind others to them as well. Greenberg ruled over the art world for nearly two decades, passing down judgments that still echo in the works of critics influenced by him who set today’s standards. Like a mountain, Greenberg continues to cast a large shadow.
Posted by Bob at 12:01 AM