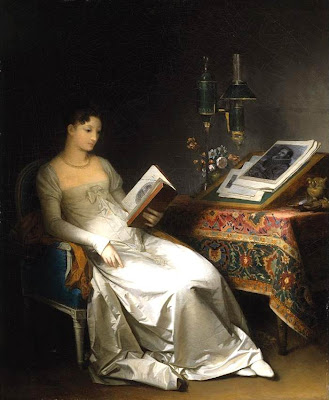 In the wake of the Age of Englightenment, especially in France, women artists found more opportunity for success, including Marguerite Gerard. Born January 28, 1761, Gerard once found herself hailed with other great female French artists such as Elisabeth Vigée-Lebrun and Adelaide Labille-Guiard. Gerard learned painting from her brother-in-law, Jean-Honoré Fragonard, king of the late Rococo style. In 1775, after the death of her mother, Gerard moved to Paris to be with her sister and Fragonard, whose connections to royalty allowed him to live in the Louvre and have access to the great collection of the kings of France. Fragonard took Gerard as his prize student, chief assistant, and mistress, sharing his love of Dutch genre painting as well as other kinds of love. Gerard specialized in Dutch-type scenes translated into the French idiom such as Lady Reading in an Interior (above, from 1795-1800). Surrounded by bourgeois and upper class life, Gerard depicted mainly the women she was familiar with in those circles and made a name and small fortune in targeting that select market of consumers. 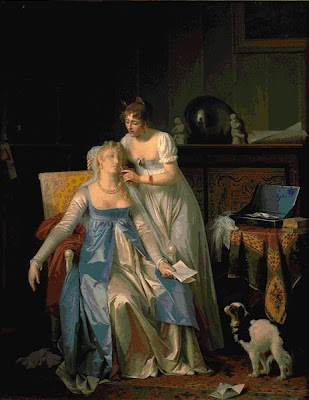 In many ways, Gerard is the female equivalent of Fragonard—light and airy and free of all the “sturm und drang” of Romanticism even as the French Revolution tore down the crown and transformed France right under her very nose. Fragonard soon found his style out of favor as his royal connections literally ceased to exist. Gerard, however, continued to appeal to the domesticity of an aspiring bourgeois, who wanted to hold on to some of the old ways if not the old leaders. Gerard’s Bad News (above, from 1804) quaintly depicts the familiar trope of a “frail” woman taking a fainting spell upon hearing bad news that overwhelms her senses. Perhaps Gerard painted such scenes tongue in cheek, confident in her own inner strength and cognizant of just how false and limiting such ideas were. Painting small domestic scenes of uncontroversial subjects, Gerard always found a ready market for her work in even the most tumultuous times. A secondary market for etchings and prints based on her paintings brought Gerard even more riches and renown, allowing her to eclipse other, equally talented women artists by simply playing to the audience more astutely. 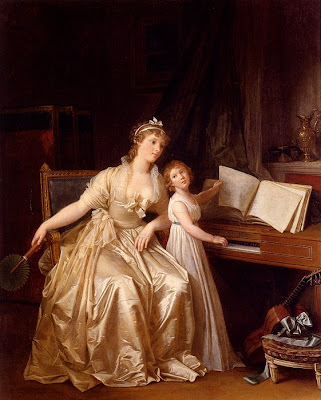 Some of Gerard’s finest paintings involve the idea of music in the parlor performed by young women seeking to make themselves more accomplished and, thus, more of a desired match for young men from successful families. Some of Gerard’s works directly address this sexual component to the musical parlor games, but The Piano Lesson (above, from 1810) does it more subtly. Here, the mother teaches the young girl how to play the piano, which stands in for all the lessons of nineteenth century, upper class womanhood passed on from generation to generation. The adult woman has perhaps gained her position as wife and mother thanks in some way to her musical skills. The female child, without realizing it, reprises the course of her mother’s life, building an arsenal of charms with which to assault suitors some day. Gerard clearly recognized the power of such gender roles and exploited them to create saleable works to support her as an unmarried woman in a world that looked askance at such creatures. Just as she once seduced Fragonard with her beauty and vivaciousness, Gerard continues to seduce modern viewers with the beauty of her technique and the shrewdness of her mind.
Posted by Bob at 12:01 AM

I don't remember seeing her work in a museum before, but I love it!

She is new to me -- thanks so much for the introduction! Lovely work!