An Oasis in the Desert 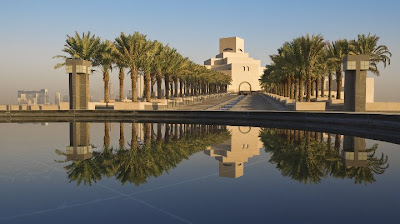 Like an oasis, the recently opened Museum of Islamic Art (above) in Doha, Qatar rises from the desert to offer an escape from the heated rhetoric of today and promote cultural understanding through art. “The Museum of Islamic Art is dedicated to reflecting the full vitality, complexity and diversity of the arts of the Islamic world,” reads the museum’s mission statement. Spanning three continents and thirteen centuries, the collection hopes to give a fuller picture of the diversity of Islamic art, which most people mistakenly see as being as monolithic as the Islamic faith itself, which is richer and fuller than the black and white ideological battles post-9/11 portray it. Thanks to the vast wealth generated by the region’s oil resources, The Museum of Islamic Art truly is a marvel to look at. Designed by I.M. Pei, the building’s total area is 382,118 square feet, including 45,477 square feet of gallery space. I’m not sure if I’ll ever have the opportunity to travel in the Middle East, but I would definitely put this museum on my must-see list both for the collection and the building itself. 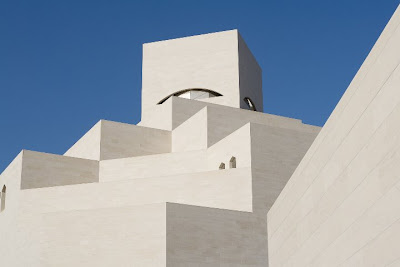 Pei took great pains to make the museum both modern and traditionally Islamic. The Islamic love of geometrical designs, so similar to fractals, is demonstrated in the interplay of planes throughout the exterior of the museum (as shown above). The architectural images of the exterior of the museum, beneath a stunningly blue sky, beside deep blue waters, and bathed in the relentless sunlight, are simply incredible. No expense was spared in the design and execution of the museum. Even the opening gala was top shelf, with Yo-Yo Ma, my favorite classical instrumentalist, heading the entertainment bill. There’s a great clarity and cleanness to Pei’s design, which makes the most of the surrounding elements, especially the Middle Eastern sunlight, that gives the building simultaneously an Islamic as well as a universal feel. Pei appeals to the senses rather than a particular religious sensibility, helping promote the spirit of inclusion and understanding even before you walk through the door. 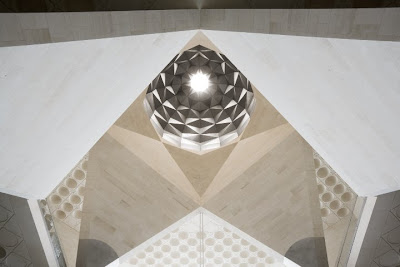 Once you come inside, the sunlight follows you, thanks to the oculus (above) at the top of the building’s dome. Whereas the outside of the museum offers all sharp lines and rigid geometry, the domed atrium offers a gentle curve that rises 164 feet from the floor. The dome comes as a surprise to the visitor because you cannot see it from the outside. Like the oculus of the Pantheon, the Museum of Islamic Art’s oculus immediately draws your eye upwards to the great “eye” above. Oculi abound in architecture, but the use of the oculus here immediately connects, in my mind at least, to that of the Pantheon, effectively reaching across and clasping hands with the Western tradition of art and culture represented by the Pantheon’s ancient roots and continued presence in the heart of Christendom and the Renaissance. I also appreciate the nod towards the Enlightenment, as the light literally exposes the reality of Islam and its art for all those willing to see. 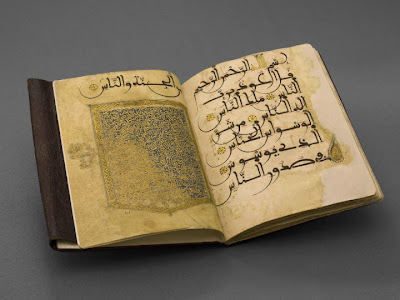 Islamic art, of course, is first and foremost the art of the Qur’an. (An example from the museum’s collection appears above.) The Arabic writing of the Qur’an is itself an art form and a devotional appeal to Allah. With all the hyperbole and gross misrepresentations of the past seven years of the “age of terrorism,” we’ve lost sight of the reality of Islam and just how connected it is to the other major religions that have shaped the West. Islamic “extremists” certainly contribute to the fear and confusion Islam often engenders in Westerners, but we need to accept the fact that they are indeed “extremists.” The Museum of Islamic Art looks to restore the core of the Qur’an in the minds of Muslims as well as in the minds of Westerners. Looking at images of the highlights of the collection, including textiles, jewelry, and pottery, I constantly drew connections between the traditions of Islamic art and that of Greece and Rome, which I am more familiar with. In those connections between the known and the unknown, the Museum of Islamic Art looks to bring understanding and, hopefully, peace. 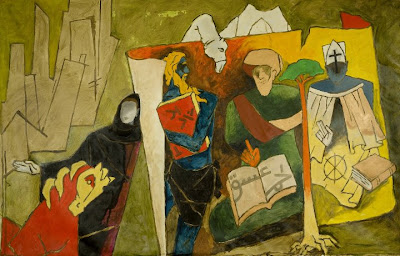 Maqbool Fida Husain (b. 1915, India). The Three Religions of the Book (2008). Acrylic on canvas. The Museum of Contemporary Arab Art, Qatar Museums Authority.

The museum’s inaugural exhibition, Beyond Boundaries, gathers special loans from other museums from around the world to “reflect the theme of cultural diversity in the heritage of the Muslim world” and to offer a fascinating counterpoint to the permanent collection. In addition to the art of the past, Beyond Boundaries offers the art of the present, such as the paintings of Indian artist M.F. Husain, a resident of Qatar. The 93-year-old Husain, the “Picasso of India,” is currently working on a cycle of 99 paintings inspired by the 99 names of Allah. Beyond Boundaries shows the first 20 paintings of the cycle in public for the first time, including Husain’s The Three Religions of the Book (above), which reconnects Christianity, Judaism, and Islam visually as they once were connected spiritually. Just as the Louvre has served as the central repository for the preservation and promotion of Western civilization for centuries, perhaps the Museum of Islamic Art will serve the same function for Middle Eastern civilization for a long time. Only time will tell, but they’re off to an auspicious start.

[Many thanks to the Museum of Islamic Art for providing the images above.]
Posted by Bob at 12:01 AM