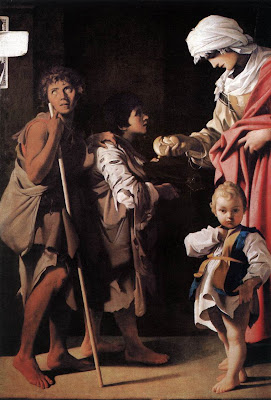 There’s something truly disturbing in the cold, dead eyes of the blind beggar in Bartolomeo Schedoni’s painting The Charity (above, from 1611). Born January 23, 1578, Schedoni knew the work of his slightly older contemporary Caravaggio and copied the more famous artist’s strong use of lights and darks for dramatic effect. Schedoni, however, resists the reductive label of “Caravaggisti” through the greater softness of much of his works, which make him a kindler, gentler Caravaggio in many ways. Schedoni studied with Annibale Carracci and admired the works of Correggio, whose gentleness, especially in religious genre paintings, set the standard for a generation of Italian artists. The little boy staring out at the viewer in the bottom right could have stepped right out of a Correggio painting. That little boy’s soft, yet still almost accusing glance balances the unseeing, yet clearly confrontational “glance” of the blind boy with the walking stick. In those two figures you can almost see Schedoni standing with one foot in each of the two schools—the little cherub representing Correggio and the striking charity case representing Caravaggio. In The Charity, the realism of the beggars symbolically asks the beauty of Correggioesque lyricism for the means of survival. 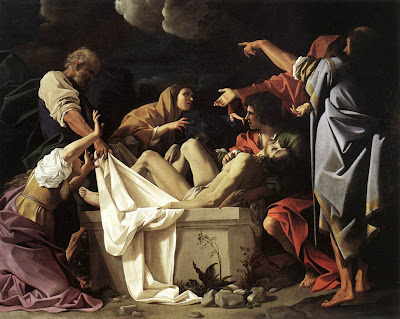 Of course, Caravaggio was the new, hot thing, so Schedoni found himself veering more towards that new style than the old ones. In The Deposition (above, from 1613), Schedoni captures wonderfully the pure compositional chaos as well as the dramatic lights and darks of Caravaggio. In fact, Schedoni’s Deposition bears a striking similarity compositionally to Caravaggio’s The Calling of Saint Matthew (1599-1600), right down to the detail of a standing figure pointing to the jumbled left side of the image. If Caravaggio mastered the power of blackness, Schedoni perfected whites “whiter than white,” as the old detergent ads used to promise. The white of the woman’s rolled sleeve almost explodes with light against a sea of darkness. Maybe Schedoni could have taken the Baroque style in a completely different direction—towards light rather than dark. Sadly, he met his end almost as quickly as Caravaggio did. 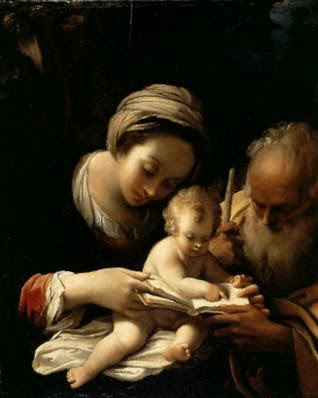 Schedoni must have been a man of great passions. He reportedly almost lost the use of his right, painting hand from playing tennis too obsessively. The same fervor that drove him to perfect his art through risky innovation, unfortunately, also enflamed him to risk money at the gambling table. Heavy losses at gambling allegedly led Schedoni to take his own life in 1615. In that same last year, Schedoni painted The Holy Family with the Virgin Teaching the Child to Read (above, from 1615), a tender, decidedly non-Caravaggioesque painting of great intimacy—a return to Correggio in many ways. Schedoni painted many small works as this as devotionals for patrons to complement his income from larger, public works for churches. Schedoni gave this particular version to his wife, perhaps in a moment of affection and thanks for her putting up with his difficult ways. For centuries after his death, Schedoni became known more for his wild ways, ala Caravaggio, than his art. The early English Romantic novelist Ann Radcliffe named a sinister monk in her novel The Italian, Or, The Confessional of the Black Penitents “Schedoni” after the painter. Although Schedoni’s whites still gleam brightly today, his star in the art history firmament faded long ago into just another shooting star that once held great promise but burned out much too soon.
Posted by Bob at 12:01 AM