For whatever reason, the first time that I saw one of Barnett Newman’s zip paintings, I thought of the paper chromatography I did in chemistry class in college. Aside from the visual similarity, perhaps it was the similarity in how the paper chromatography broke down a compound and identified its individual components by light frequencies that made me think of it in front of Newman’s paintings, which break down all of human existence and isolate individual components such as love, fear, death, heroism, etc. Born January 29, 1905, Newman may have been the best pure philosopher in the history of American art. “Who knows but that, on the lower frequencies, I speak for you?" Ralph Ellison writes at the end of his amazing novel Invisible Man. Newman’s Vir Heroicus Sublimis (above, from 1950-1951), which translates as “man, heroic and sublime,” speaks for all of us on the higher frequencies of what noble things we can aspire to. In the 1950s, when the Cold War threatened mutual mass destruction and other forms of repression-driven madness haunted the human soul, Barnett Newman looked to inject a sense of nobility, gentleness, and humor.
Sometimes, Newman’s message is misinterpreted by a damaged receiver. Who's Afraid of Red, Yellow, and Blue IV (above, from 1969-1970) was attacked in 1982 by a deranged young man who felt that the work compelled him to destroy it. Several of Newman’s works have been assaulted over the years by people to whom they have misspoken. Sadly, Newman’s reputation suffers because his works lose so much in reproductions. Who’s Afraid of Red, Yellow, and Blue IV looks more like a simple, computer-generated graphic. Yet, in person, it can inspire emotional responses, sometimes violent, similar to those inspired by the works of Newman’s contemporary Mark Rothko. I admit that I didn’t fully appreciate Newman’s work until I had an opportunity to view a retrospective of his work at the PMA in 2002. I’ve always found the combination of the power of Newman’s words and the power of Newman’s wordless paintings fascinating. To be so articulate and dynamic in such a wide range of means of expression leaves me personally speechless. 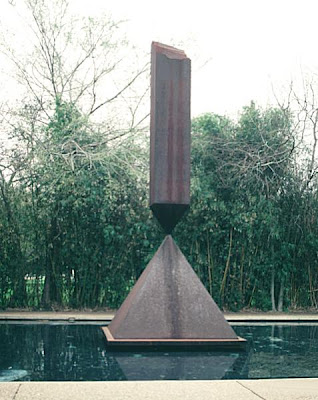 Newman was wise enough to know that some situations are beyond reason, beyond words. For many, Newman’s Broken Obelisk (above, from 1967) has become the go-to visual image of irrational injustice in all its forms, from 9/11 to the latest school shooting. It seems almost inevitable that every great senseless tragedy will be accompanied by Newman’s Broken Obelisk, usually set to a soundtrack of Samuel Barber’s Adagio for Strings, another seemingly inevitable source of wordless solace. It says a lot about the American psyche that Newman’s presence in the popular culture falls far short of that of Jackson Pollock, his hard-living, fast-dying, cinematic-ready contemporary. Nobody will ever make a movie of Newman’s life and art—pure box office poison. Newman is far too subtle and nuanced for our quick-cut, impatient lifestyle. Yet, when our world is turned upside down, we reach not for the visual violence of the drip paintings but for the measured cadences of Newman’s art, who continues to speak to us on the higher frequencies, whether we chose to listen or not.
Posted by Bob at 12:01 AM

I remember an art book I had as a child (which book I really admire as an adult) that compared a zip painting by Newman with the creation of Man from the Sistine Chapel. I didn't get it then, but now i think it makes sense: both the zip and the not-quite-touching fingers create the same sense of a creative spark. What do you think?

I like that. I just read where someone called Monet's paintings in the Orangerie the Sistine Chapel of Impressionism, so I think each generation needs its own Sistine Chapel.