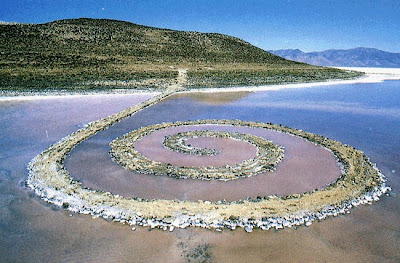 When Robert Smithson tragically died in a 1973 plane crash, he literally left his legacy written upon the earth in works such as Spiral Jetty (above, from 1970). Born January 2, 1938, Smithson began as a painter, working in the Abstract Expressionist style before emulating the religious art of the Byzantines and, finally, turning to minimalist sculpture after marrying the sculptress Nancy Holt. Although minimalist in conception, Smithson’s works are often mammoth in construction. The 1,500-foot long Spiral Jetty composed of 6,550 tons of rock and earth (hauled to the lake by two dump trucks, a large tractor, and a front end loader) took only 6 days to build. On the seventh day, Smithson rested, but the Spiral Jetty has been working and evolving in its environment ever since. In 1970, the waters of the lake shone with an eerie red that caught Smithson’s eye and created a great contrast with the black basalt of the jetty itself. Over time, thanks to the salt content of the water and other environmental factors, the rocks have turned almost white and the water a pale pink. Rising waters submerged Spiral Jetty for almost 30 years. Today, oil companies looking for new deposits threaten the land nearby. Fortunately, fans of Smithson’s work and ecologically mindful parties have preserved his work and protected the land he loved. 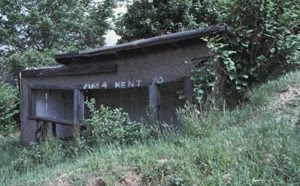 There’s a great debate over whether Spiral Jetty should be restored. Smithson believed in the wisdom of nature’s cycles and saw beauty in entropy, so perhaps he would have approved of Spiral Jetty’s present appearance. Whether he would approve of the present state of Partially Buried Woodshed (above, pictured in the early 1970s) is another matter. In January 1970, Smithson erected a standard wooden shed on the grounds of Kent State University and buried it under twenty truckloads of earth. The shed collapsed beneath the weight of the dirt. In May of that same year, the infamous Kent State Shootings occurred in which United States National Guardsmen shot and killed four students and wounded nine others who were protesting the the American invasion of Cambodia. Soon after the shootings, someone scrawled “May 4 Kent 70” on Partially Buried Woodshed (visible in the picture above), linking the damaged structure to the damaged American social structure of the time. In 1975, arsonists burned part of the shed. In following years, Kent State officials removed parts of the shed as they fell away. Today, only the shed’s foundation and a mound of earth mark where Smithson’s work once stood. Where Partially Buried Woodshed once symbolized the shattered American edifice, it’s removal now symbolizes how America chose to forget the past rather than remember, leaving nothing to take its place. 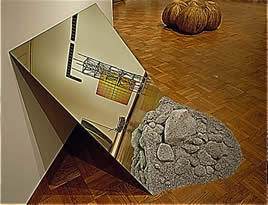 Smithson is a difficult artist to appreciate in the sense that his work is so site-specific. Pictures of Spiral Jetty don’t do justice to the work, which is all about a sense of place. Other works, such as Partially Buried Woodshed, simply no longer exist except in photographs. However, after Smithson’s death, his estate attempted to reprise some of his works for museums, including Slant Piece (above), a 1976 partial reconstruction of the 1969 Cayuga Salt Mine Project, in which Smithson set up a series of eight mirrors in the mine and another eight along the trail that led from the mine to a nearby gallery. Smithson thus brought the reality of the mine, reflected and conducted like electricity by the mirrors, into the gallery itself. Today, rock salt from the same mine surrounds the slanted mirrors in art museums, a pale reflection of the original work but at least a glimmer of once was. Like Andy Goldsworthy, Smithson made his art fully realizing that it had an expiration date. Smithson’s tragic death, like the tragic history of much of his art, reminds us that all permanence, even in art, is an illusion.
Posted by Bob at 12:01 AM

Sorry but I think part of this article is factually incorrect. smithson did not erect the woodshed. the woodshed was already on the campus property on a back lot inherited by the campus from an old farm. smithson had students remove everything from inside the woodshed and then he partially buried it.