With all eyes set to turn to Washington, DC, and the inauguration of Barack Obama in a few weeks, Americans become hyperaware momentarily of the pomp and circumstances surrounding the presidency, including the perceptions of the First Lady. Since 1961, the standard by which all other First Ladies have been measured has been Jacqueline Bouvier Kennedy. “Jackie” shaped the style of the Kennedy presidency and contributed greatly to the myth of “Camelot” surrounding those short three years. Margaret Leslie Davis’ Mona Lisa in Camelot: How Jacqueline Kennedy and Da Vinci’s Masterpiece Charmed and Captivated a Nation looks back at the highest moment of Jackie’s ambitions to infuse art into politics and push American culture into competing with the traditions of Europe and assume a place as the leader of the world in that sphere as well. An obsessive Francophile, Jackie kept her eye on the greatest art “prize” of Western civilization—Leonardo da Vinci’s Mona Lisa. While on a diplomatic visit to Paris, Jackie and JFK met up with Andre Malraux, the French Minister of Culture. Jackie had read many of Malraux’s works and was “powerfully drawn to his ideas about culture, humanity, and social justice,” writes Davis, forming what a friend called an “intellectual crush.” Charmed by the beautiful First Lady, Malraux (shown above with Jackie) may not have seen the request for the Mona Lisa coming, but he eventually succumbed to her charms and the chance of improving the strained post-war relations between France and the United States. It was the beginning of a beautiful friendship that would bring the most famous “lady” in art to American shores for the first, and only, time.
“I am the man who accompanied Jacqueline Kennedy to Paris,” JFK joked upon returning, acknowledging his secondary status. Step two of Jackie’s charm offensive came when Malraux visited the United States in May 1962. Jackie arranged a lavish dinner in Malraux’s honor. Mark Rothko, Andrew Wyeth, and Franz Kline were invited to represent America’s great painters. Representatives from American literature, film, and music were also called upon to impress Malraux. The star of the show, however, remained Jackie. In the photo above from the event, all eyes focus on the First Lady, radiant in a shimmering pink dress. The Malraux dinner culminated the Kennedys’ program for raising the status of the arts in America. “To their way of thinking,” Davis writes, “the centuries-old tradition of public support of the arts embraced in Europe was one of the missing ingredients in American life.” The added prestige such cultural weight gave to JFK’s presidency was an intended bonus, of course. At the end of the evening, his head still spinning, Malraux whispered a promise in Jackie’s ear that the Mona Lisa would be coming to America. 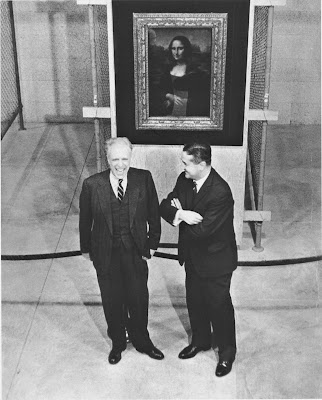 To circumvent Louvre officials, French President Charles de Gaulle and Malraux deemed the loan of the Mona Lisa a “personal” loan to the Kennedys. Although Jackie wooed de Gaulle, too, the hard-nosed leader saw more Cold War politics than culture in the loan. “President de Gaulle desired a gesture of solidarity to the Americans that didn’t require alterations to his independent nuclear weapon program,” Davis explains, “and the Mona Lisa, the ultimate icon of French cultural superiority, could serve as the roving ambassador of French good will.” Davis masterfully interweaves the story of the Mona Lisa’s travels with the very real dangers of the Cold War at its hottest. Knowing that discussions for the trip took place as Kennedy met the challenge of the Cuban Missile Crisis, an October when the end of the world seemed a distinct possibility, places the cultural event in a whole new perspective. Despite the Louvre’s fears that the Mona Lisa would not survive the voyage, the Mona Lisa did indeed come to the United States in December 1962. National Gallery of Art Director John Walker (shown above with Jean Chatelain, Director of the Museums of France, in front of the painting at the National Gallery, January 1963) hesitatingly accepted the duty of watching over the Mona Lisa in America. Walker, who had studied with Bernard Berenson, had helped school Jackie and JFK personally in art appreciation. Fears of being the man responsible for the destruction of the Mona Lisa led to multiple health problems for Walker, but he did not let the Kennedys down. Davis breathlessly tells the tale of how even the slightest change in temperature or humidity threatened to shatter the already cracked wood support of the Mona Lisa. You’ll find yourself on the edge of your seat, even though you know the ending. 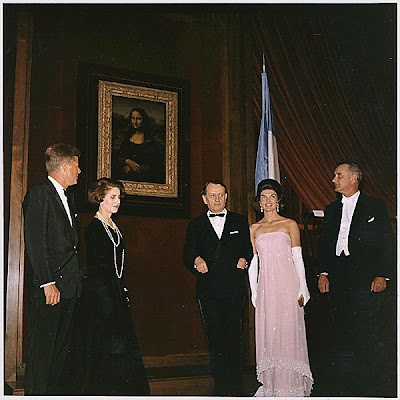 On January 8, 1963, a gala opening at the National Gallery hosted by the President and First Lady welcomed the Mona Lisa to America. (Above, President Kennedy, Madame Malraux, Andre Malraux, Mrs. Kennedy, and a noticeably uncomfortable Vice President Lyndon Johnson surround the Mona Lisa.) In his speech at the unveiling, JFK, Davis writes, “shrewdly transformed the Mona Lisa into a symbol of the Cold War, representing Western progress in contrast to the repressive regime of the communist block.” “Politics and art, the life of action and the life of thought, the world of events and the world of imagination are one,” JFK said in closing. As Arthur Schlesinger, Jr., put it, “[JFK] saw the arts not as a distraction in the life of a nation but as something close to the heart of a nation’s purpose.” Whereas Napoleon once looted Europe and beyond and brought back those treasures to the Louvre to proclaim France as the military and cultural center of the world, JFK and Jackie “borrowed” the Mona Lisa to proclaim America and the twentieth century military and cultural center of the globe. In the 1950s, the U.S. Government tried to assert American freedom and cultural superiority through the promotion of Abstract Expressionism. In the 1960s, the Kennedys, rather than forge an American culture from scratch, simply claimed the heights of Western civilization as America’s rightful possession.
After a month at the National Gallery, the Mona Lisa traveled to the Metropolitan Museum of Art in New York. (Above, a photo of the line of people waiting outside the Met to see the Mona Lisa.) Between the two venues, nearly 2 million visitors saw the great painting. Stunned by the level of interest, Walker instructed National Gallery guards to direct visitors through the rest of the museum to “let them see a little Rembrandt, too.” Before the Mona Lisa exhibition, Walker was “long a believer in the exclusivity of institutions of fine art,” according to Davis, but the public fervor converted Walker into a populist. In his speech at the Mona Lisa’s departure, Walker said, “This famous portrait stirred some impulse toward beauty in thousands of human beings who had never felt that impulse before.” Post-Mona, the National Gallery and the Met experienced continued increased attendance. Davis rightfully points to the Mona Lisa exhibition as the beginning of the blockbuster exhibition in America, and more significantly points to the indispensible role of Jacqueline Kennedy in helping create the phenomenon of the American museum as we know it today.

At the groundbreaking of the Robert Frost Library in late October 1963, JFK said the following:

One month later, JFK was dead. His and Jackie’s legacy in the arts, however, lived on. “Mona Lisa’s visit triggered a lingering national love affair with the arts in which culture was no longer the privileged domain of a few educated connoisseurs,” Davis writes, “but rather central in the life of all Americans.” Many of the children who came to see the Mona Lisa (above, at the National Gallery) became adults with a continued interest in the arts. Alas, 45 years later, claims of the centrality of art in American life ring hollow. Museums now face a challenging economy as well as decades of underfunded arts education in schools and NEA scapegoating. However, if the results of the last election prove anything, it might be that Americans have grown weary with the Culture Wars of the last four decades. Perhaps the new administration will revitalize the arts and culture as part of the larger program of restoring American pride and prominence internationally. If so, then Margaret Leslie Davis’ Mona Lisa in Camelot could serve as a much-needed reminder of what once was and what could be again if someone with the vision of Jacqueline Kennedy not only dreams big, but makes it happen.

[Many thanks to Da Capo Press for providing me with a review copy of Margaret Leslie Davis’ Mona Lisa in Camelot: How Jacqueline Kennedy and Da Vinci’s Masterpiece Charmed and Captivated a Nation.]
Posted by Bob at 12:01 AM

The Rang Rasiya Freedom of Expression Art Competition extended until January 21, 2009
After receiving an overwhelming response , the Rang Rasiya Freedom of Expression Art Competition, a nation wide contest, a venture by Infiniti Film Entertainment has extended the closing date of entries till January 21, 2008. This Art Movement is an endeavor to bring about a socio cultural movement in India and provide a platform for new talent who are passionate about Art.
The competition is open to all above the age of 18. Entries open till January 21,2008.For participation, log on to www.rangrasiya.com .
For further details contact – Infinity Film Entertainment @ 022- 40742100 or Logon to www.rangrasiya.com

Hello!!By chance I arrived to your blog and saw this post.A few weeks ago I saw a documentary on Jackie Kennedy.I did not know about Mona Lisa's travel to USA before I saw it.She did not have an easy life but she had the oportunity to do some amazing things and have unique experiences...