Coming to Your Emotional Rescue 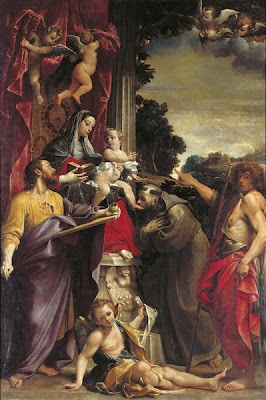 Annibale Carracci (Italian, 1560–1609). Madonna Enthroned with Saint Matthew, 1588. Oil on canvas. Unframed: 384 x 255 cm (151 3/16 x 100 3/8 in.). Gemäldegalerie Alte Meister, Staatliche Kunstsammlungen Dresden. Photo © Staatliche Kunstsammlungen Dresden. Photographers: Estel/Klut.
As the High Renaissance waned and Mannerism reigned over the European art world, Ludovico Carracci and his cousins Annibale and Agostino Carracci quietly began to stage a revolution that would redirect the course of Western art. While Giorgio Vasari praised the old ways in his Lives, the Carraccis penned their protests in the margins and later in such paintings as Annibale Carracci’s Madonna Enthroned with Saint Matthew (above, from 1588). The Getty Museum’s current exhibition Captured Emotions: Baroque Painting in Bologna, 1575-1725 and the companion catalogue, edited by Andreas Henning and Scott Schaefer, try to recreate that pivotal moment in painting history when the Carraccis turned a corner and brought a heightened sense of emotion and humanity to painting that had been lost in the Olympian heights of Michelangelo and the rote gestures of Mannerism. Taking paintings from the Getty’s collection, several other southern California collections, and that of Gemäldegalerie Alte Meister, Staatliche Kunstsammlungen Dresden (all of which can be seen here), Captured Emotions recaptures a time at which the Carraccis were as famous as Raphael and Bolognese Baroque painting set a standard that not only contemporary but also future artists had to come to terms with. 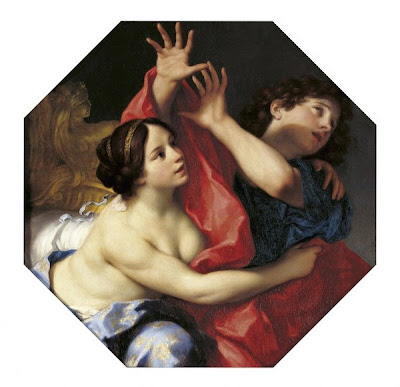 Carlo Cignani (Italian, 1628–1719). Joseph and Potiphar’s Wife, about 1670–80. Oil on canvas. Unframed: 99.1 x 99.1 cm (39 x 39 in.). Gemäldegalerie Alte Meister, Staatliche Kunstsammlungen Dresden. Photo © Staatliche Kunstsammlungen Dresden. Photographer: H.-P. Klut.
In the opening essay of the catalogue, “Painting in Bologna from the Carracci to Crespi,” Charles Dempsey points to the Farnese Palace frescoes of Annibale and Agostino Carracci as the turning point in which the new style conquered Rome, “where painting had declined precipitously after the great years of the High Renaissance.” Dempsey bravely claims that the Carracci style then dominated “the history of painting in all Europe, not to be superseded until the Impressionist revolution of the mid-nineteenth century.” This new style found a powerful ally in the new, post-Reformation Catholic Church. The Counter-Reformation, launched at the 1563 Council of Trent, implored religious art to all, from the most sophisticated to the most illiterate. The common bond was human emotion. “Never before had direct psychological appeal been conceived as central to the enterprise of painting,” Dempsey writes. “In asserting this, Counter-Reformation clerics had unwittingly unleashed a tiger, for the depiction of a nude and repentant Magdalene in all her flesh-and-blood splendor, for example,… could arouse sensations simultaneously devout and carnal.” Old Testament tales such as that of Joseph and Potiphar’s Wife became fodder for this multi-faceted, emotional approach, leading to diverse interpretations such as the three versions in this exhibition (all shown here; Carlo Cignani’s appears above, from 1670-1680). Cignani’s Rubenesque wife of Potiphar almost leaps out of the image as Joseph recoils from her advances, his hands speaking volumes of his dismay. After decades of dull Mannerism, the Carracci style reached out and grabbed the audience and awakened both the pious and those purely interested in art. 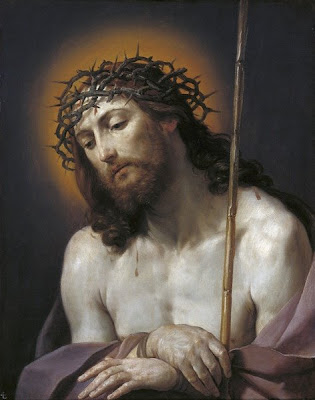 Of all the artists in the show, Guido Reni stands out for his masterful technique and emotional rendering. In Christ with the Crown of Thorns (above, form 1636-1637), “the miracle of Reni’s art appears in the unerring poise he strikes between the actuality of flesh and blood and the poetic metaphor Christ simultaneously embodies,” writes Dempsey. Reni strikes the perfect note that the church desired. Caravaggio accused Reni of stealing his style, writes Stefano Pierguidi in his essay, “The Naturalistic Strand in Bolognese Baroque Painting,” but Reni rejected Caravaggio’s work as too naturalistic, thus losing touch with the poetic side. Christ with the Crown of Thorns also illustrates the new technique of painting on copper. “On copper plates it was possible to execute especially intricate and radiant paintings, inasmuch as the support was hard and smooth and did not absorb oil pigments,” Andreas Henning explains in his essay on the subject. From around 1575 until around 1650, artists painted on copper to achieve that inner radiance that the divine Savior deserved. Such special effects only added to the emotional impact of these paintings as the battle for souls and paying commissions raged. 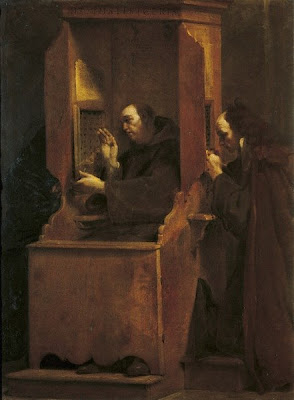 If the Carraccis stand at the beginning of this movement, Giuseppe Maria Crespi stands at its end. Crespi’s Seven Sacraments (one of which, Confession, appears above, from 1712) represent the height of the naturalistic strain of the Bolognese Baroque. “Crespi presented the sacraments as he observed and experienced them himself as scenes from everyday life, in contemporary dress, without idealization,” writes Bjorn Kerber in “Documenting Invisible Grace: Giuseppe Maria Crespi’s Seven Sacraments.” Although Poussin had painted the same sacraments in his own classical style, he had a great appreciation for the Bolognese Baroque school. The royalty of Europe and Russia collected their works fervently. Yet, by the middle of the nineteenth century, the Carraccis and their followers fell out of favor. John Ruskin, traveling through Italy while working on Modern Painters, attacked them viciously. “There is no entirely sincere or great art in the seventeenth century,” Ruskin wrote. “Insincerity and pretentious artificiality of emotion were to be cited against them soon as the Napoleonic Wars in the early nineteenth century changed the map of Europe and turned a generation of young intellectuals into romantic prophets and pragmatic nihilists,” laments Tatiana Senkevitch in “The Critical Reception of the Bolognese School.” Winckelmann, Goethe, Stendhal, Hazlitt, and the poet Robert Browning, among others, continue to admire the Bolognese Baroque school, but the times had changed to the point that such emotional appeals no longer rang true. 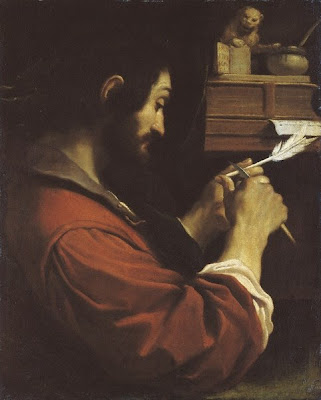 For me, the appeal of the Carraccis and their school comes not only in their art but in their appreciation of art. If Vasari is the first art historian writing, they were the first art historians in practice. The Carraccis obsessively studied the art of the past and emphasized the works of predecessors when teaching in their academy. Taking a buffet-style approach to the Renaissance, the Carraccis picked and chose the very best and developed a style that synthesized all of those strengths. “They found the natural purity of Correggio’s color unequaled by any master,” Dempsey writes, “while the dramatic force of Titian’s chiaroscuro was unrivaled.. No artist could equal Michelangelo in his mastery of the nude in action… Raphael was unsurpassed in composition and the perfection of his proportions.” Such assessments seem natural today, but back then, Dempsey stresses, “[t]hese critical distinctions were in themselves new and unprecedented.” Works such as Guercino’s Saint Mark (above, from 1615) arise with great consciousness of the past masters, both in their strengths and weaknesses. The Carraccis put into artistic practice the critical appreciation of art history in a way that both honored the past as well as looked to the future of art. Such consciousness both spurs on and plagues art making even today, thus linking the artists of today to the spirit of these artists centuries ago. Captured Emotions restores the Bolognese Baroque school to its proper place in the great scheme of art history as the beginning not only of self-reflecting art but also the first freeing of the tidal wave of emotions that have made so much art since so compelling. With essays and online features as welcoming and engaging as the paintings themselves, the Getty has created an opportunity for the art-loving public to regain a lost piece of the long art history journey to today.


[Many thanks to the Getty Museum for providing me with a review copy of Captured Emotions: Baroque Painting in Bologna, 1575-1725, edited by Andreas Henning and Scott Schaefer, and for the images above from the exhibition.]