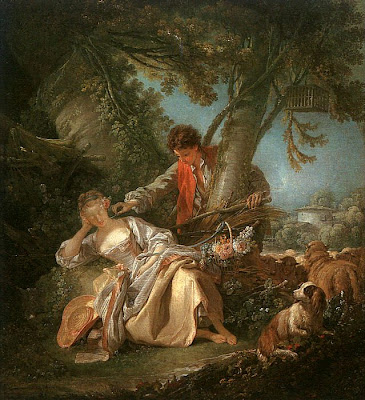 One of the greatest of the French Rococo painters of the eighteenth century, Francois Boucher was born September 29, 1703. Boucher epitomizes the excesses—visual, sensual, and sexual—of the days of King Louis XV and Madame de Pompadour, the King’s favorite mistress and Boucher’s greatest patron. Genre scenes such as The Interrupted Sleep (above, from 1750) bring it all together—a sumptuous landscape within which a young man awakens a beautiful young girl for reasons left unsaid but perfectly understood. It’s like a scene from Dangerous Liaisons. As risqué as such images may seem, Boucher provided even more sexually charged images of royal mistresses and even his own wife for a private clientele. 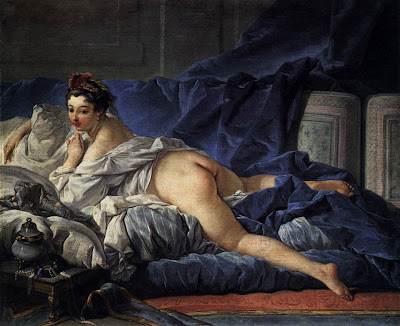 Denis Diderot accused Boucher of prostituting his own wife in paintings such as 1745’s Brown Odalisque (above), which displays Madame Boucher’s charms for all to see. Boucher’s debt to Rubens comes through clearly in his love of Rubenesque flesh modeled in paint. Boucher painted the 15-year-old Marie-Louise O’Murphy, calling it his Blonde Odalisque. O’Murphy later became one of Louis XV’s many mistresses (and one of the many to be defeated in her challenge to Madame de Pompadour’s place as the favorite). Beneath all the froth and frills of the Rococo style always beats a passionate heart full of the intrigues and energy of sexual politics. Boucher catered to gentlemen who preferred both blondes and brunettes. 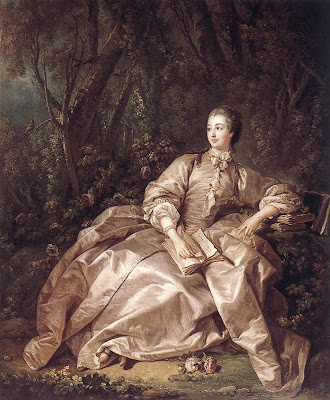 In addition to his paintings, especially his grand portraits of the rich and powerful, such as Madame de Pompadour (above, from 1758), Boucher helped design the Rococo "look" like few others. Boucher designed sets for many Parisian theaters and later designed the “theaters” that were the royal palaces at Versailles, Fontainebleau, and Choisy. Maurice Quentin de la Tour may have been a better portraitist and Jean-Honore Fragonard may have captured more of the light frivolousness of the Rococo period, but Boucher stands somewhere in between those two poles—painting the reality of the time with all its sexual energy yet still playing (and in many ways, writing the “rules”) of the game at the same time. Comparing the portrait of Marie-Louise O’Murphy to that of Madame Pompadour, you can see that the poor little Irish girl didn’t stand a chance. Boucher died in 1770, well before the French Revolution brought all the Rococo crumbling down, but I suspect that he knew that those days didn’t stand a chance, either.