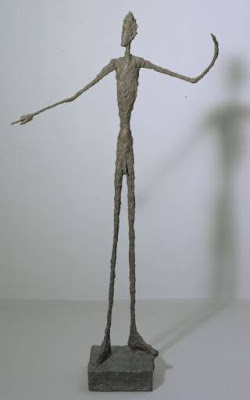 “To my terror the sculptures became smaller and smaller,” Alberto Giacometti once said of his earliest attempts at sculpture. “Only when small were they like, and all the same these dimensions revolted me, and tirelessly I began again, only to end up, a few months later, at the same point.” Giacometti, born on this date in 1901, found himself compelled to create distorted figures, thinning and elongating them beyond normalcy. Such distortions mirror the distorted view Giacometti had of life and art. Friend of the Existentialist philosopher Jean-Paul Satre, Giacometti sculpted his Existentialism. As innocent and almost cartoonish as Man Pointing (above, from 1947) may seem, the man may be pointing towards the horror of human existence as much as anything else. 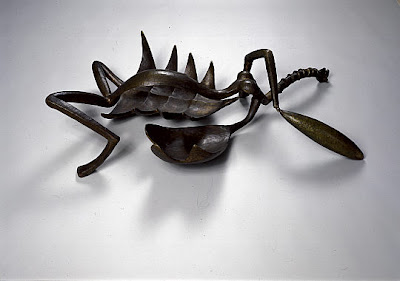 Giacometti lived in Paris in the glory days of modern art, befriending fellow artists such as Pablo Picasso, Joan Miro, and Max Ernst. Giacometti flirted with Surrealism during this time, taking away more of the horrific, life-negating aspects of that movement than the playful, life-celebrating ones. Giacometti lived in a style as thin as his sculptures, rejecting the conventional life in every way. “Establishing yourself, furnishing a house, building up a comfortable existence, and having that menace hanging over your head all the time—no, I prefer to live in hotels, cafés, just passing through,” Giacometti once said. The “menace” of life appears in his macabre 1932 sculpture Woman with Her Throat Cut (above). As violent and perhaps misogynistic as the eye-slicing scene in Un Chien Andalou, Woman with Her Throat Cut screams with the Existentialist view of life Giacometti adopted. When diagnosed with stomach cancer near the end of his life, Giacometti bizarrely remarked that of all the diseases he could have, stomach cancer was the one he always wanted. 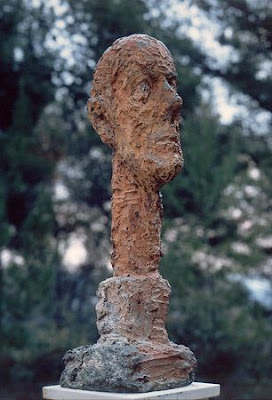 Casts of Giacometti’s work can be found in almost any major museum. By the end of his life, Giacometti became one of the most financially successful and lauded artists of the twentieth century. Works such as Monumental Head (above, from 1960) display that undeniably recognizable Giacometti touch. Devoid of the artist’s philosophy, such works can actually seem benign, a playing with the conventions of the human form. Taking into account the ravages of fascism’s effects on twentieth century Europe, however, they become characters of the apocalypse. Giacometti once remarked that he felt crushed standing in front of the frescos of Giotto. Such a sensitive soul could only feel equally crushed and stretched beyond all proportion before the mosaic of human cruelty he witnessed firsthand during the two world wars. Perhaps these works offer some solace in showing that the human soul can be crushed and stretched almost beyond recognition yet still, in some sense, remain intact.