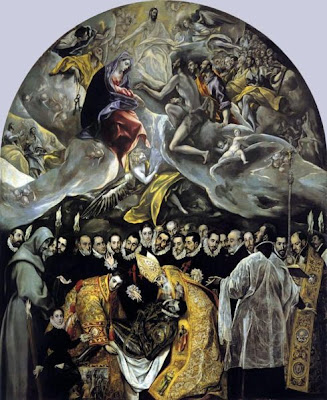 Doménicos Theotokópoulos, born October 1, 1541, would proudly sign his paintings with his full Greek name, proud of his Greek heritage despite working in Spain. Today, the owner of that mouthful of a name is better known as El Greco, simply “The Greek” in Spanish. A whole school of art unto himself, El Greco broke all the rules of the Renaissance in creating masterpieces such as The Burial of Count Orgaz (above, from 1586-1588). The Burial is literally “orgaz”-mic in the proliferation of faces surrounding the corpse of the Count beneath the swirling heavens above them full of ethereal beings elongated with ecstacy. El Greco creates a new Last Judgment here, perhaps fulfilling his earlier wish to paint over Michelangelo’s Last Judgment during his days in Rome to “update” the doctrinal aspects of Michelangelo’s art. Thankfully, the Pope at the time denied his request. Equally thankfully, El Greco’s work has improbably survived to be appreciated again in the twentieth century. 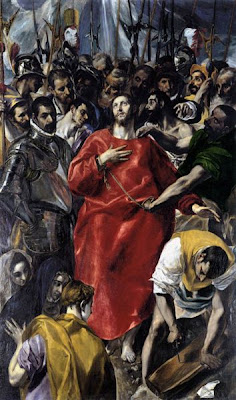 Born in Crete, El Greco grew up surrounded by Byzantine art, imbibing the unique look of that ancient time and culture. Studying in Rome in 1570, the young El Greco spent time in the studio of Titian, developing a love-hate relationship with the masters of the Renaissance, unable to escape their influence yet aching to paint in his own style. The Disrobing of Christ (above) shows El Greco at his most Renaissance in some ways, placing a boldly colored Christ at the center of the composition. The figure at Christ’s side wears contemporary Spanish armor, however, disrupting the suspension of disbelief. The cacophony of figures reaching far back into the distance disrupts any sense of harmony as well. Whereas these aspects jarred the sensibilities of El Greco’s contemporaries, they resonated with modern artists searching for their earliest forefathers. 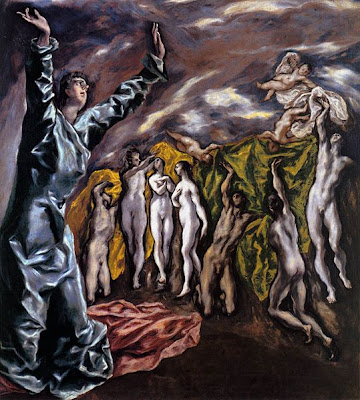 The Romantic era began the rediscovery of El Greco, recognizing a wild abandon in the old master. The Impressionists and Post-Impressionists became aware of El Greco and admired his free brushstrokes and inventiveness. Degas reportedly owned an El Greco. While obsessively collecting Renoir, Dr. Albert C. Barnes found time to purchase an El Greco, too. Spanish artist Ignacio Zuloaga purchased The Opening of the Fifth Seal (above, from 1608) and showed it to his friend Pablo Picasso, who adopted El Greco as a “Spanish” forefather and painted works reinterpreting El Greco in his own unique style. The German Expressionists saw El Greco’s distorted bodies stretched in spiritual exaltation and adopted them for their representations of modern living’s angst. Today, El Greco enjoys a popularity greater than ever before. “The Greek” was born well before his time, yet remains an artist of his own unique time, a combination of influences and vision so unique that it took centuries to be understood.

(BTW, The Opening of the Fifth Seal was part of my favorite art exhibition advertisement ever. While I was in London in 2004, The National Gallery of Art was showing a huge El Greco exhibit. The buses in the city were plastered with an image of The Opening of the Fifth Seal with the words “A Show of Hands… Who’s Going to El Greco?” I’m still waiting for a deodorant company to take advantage of this painting, ala Pataday and Van Gogh.)