Born With a Scream

“I should have been, I don’t know, a con-man, a robber or a prostitute. But it was vanity that made me choose painting, vanity and chance,” Francis Bacon once said. Born October 28, 1909, Bacon suffered through a troubled youth, struggling with his homosexuality. His father asked a close friend to “make a man” out of young Francis not knowing that his friend was himself gay, beginning a string of older, rich men to whom Francis would attach himself. Those liaisons helped Bacon get to Weimar Berlin and Paris in the 1920s, where he would discover the great modernist art taking flight. Bacon returned to London in 1928 and found work as an interior designer. While working in the old studio of Pre-Raphaelite painter John Everett Millais, Bacon painted his first great work, Three Studies for Figures at the Base of a Crucifixion
(above, from 1943), a triptych featuring three nightmarish figures with horrific, gaping mouths, presaging the later works of macabre beauty Bacon would paint for the next 40 years. 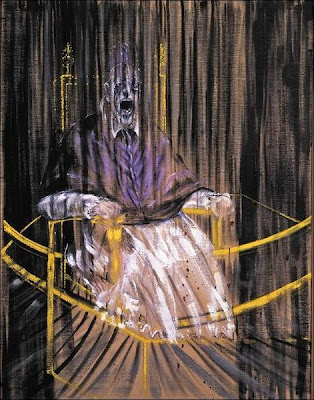 Bacon found great inspiration in the Old Masters. “Picasso was one of that genius caste which includes Rembrandt, Michelangelo, Van Gogh and above all Velázquez,” Bacon once said. Later, Bacon, talking about his own Study after Velazquez’s Portrait of Pope Innocent X (above), said that “Velázquez found the perfect balance between the ideal illustration which he was required to produce, and the overwhelming emotion he aroused in the spectator.” Whereas Velazquez painted an image of the Pope that the Pope would be pleased with, while “hiding” the true emotion beneath, Bacon had no need to cover over the emotion, portraying the intensity and violence of the figure on the surface. Bacon plays with Velazquez’s imagery to create something totally different and completely modern, yet still connected to the original. “You see, painting has now become, or all art has now become completely a game, by which man distracts himself,” Bacon once said. “What is fascinating actually is, that it's going to become much more difficult for the artist, because he must really deepen the game to become any good at all.” Bacon continually rewrote the rules of the painting game, taking the old rules and reinterpreting them in ways true to the “game” itself while also true to Bacon’s conception of the twentieth century as an age of public and private horror. 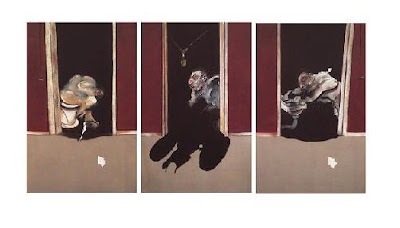 “We are born with a scream; we come into life with a scream, and maybe love is a mosquito net between the fear of living and the fear of death,” Bacon once mused on the nature of love, life, and death. Bacon’s personal “mosquito net” during the 1970s was a former boxer and thief named George Dyer, the subject of Triptych May-June 1973 (above). The movie Love Is the Devil (which I reviewed here) fleshes out the story of that failed, twisted romance, one of Bacon’s many affairs with younger men in the second half of his life. Dyer died of an overdose on a toilet in a Paris hotel room on the eve of a major retrospective of Bacon’s work, an image Bacon reproduces in this triptych, coldly looking upon the death of his beloved in the same clinical way he approached all his subjects. In the past year, I’ve read more and more about Bacon and have come to appreciate his work even more than before, but more for his technique and interplay with his predecessors in art history. There’s a coldness in much of Bacon’s work that makes true affection impossible, but he’s much too fascinating and important to be ignored.