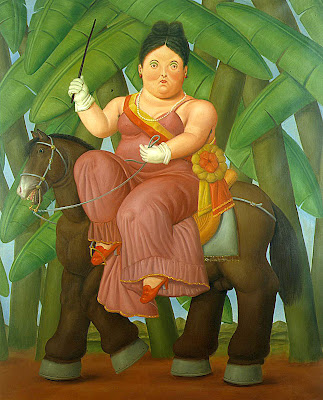 Growing up in Medellin, Columbia, Fernando Botero’s earliest visual influences were the Catholic churches and chapels around him, full of the weird and wonderful world of the baroque. “Baroque art in Latin America expressed religious and political power, in images that were at once dramatic, rich, and convincing,” John Sillevis writes in the catalogue to the exhibit The Baroque World of Fernando Botero at the Oklahoma City Museum of Art. “The drama of the baroque style was not aimed at aesthetic enjoyment, but at a religious experience that would have a lasting impact on the beholder.” Botero would later travel to Europe and experience more of the Western tradition, embracing that influence into his scope, but it is this baroque foundation that lies behind Botero’s own “lasting impact on the beholder.” Through works such as The First Lady (above), Botero invents his own world of Latin American power “with all the baroque splendor and terribilità” of the real thing. Sillevis likens Botero’s South American paintings to “the lyrics of a bolero–they may sound idyllic, but they are profoundly melancholy, and full of the vicissitudes of fate.” This exhibit and catalogue round out Botero’s often-caracatured art, showing how his distorted proportions represent the distorted proportions of joy and suffering that are part of not just his native culture but all modern existence. 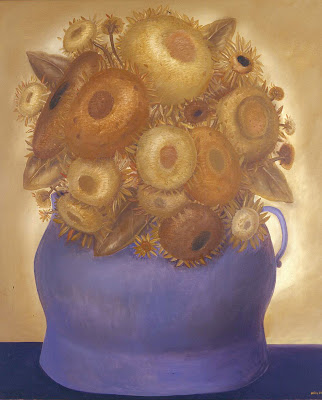 In works such as Sunflowers (above), Botero consciously confronts the larger Western tradition by inviting comparison to Van Gogh and expands his art from the narrow confines of Latin America. “If I paint a picture that has the same theme as that used by a famous painter,” Botero once said, “I am part of that same tradition.” While traveling throughout Mexico, Botero learned from the art of Diego Rivera, Frida Kahlo, and David Alfaro Siqueiros, among others. Similarly, travels in Spain brought Picasso, Velazquez, and Goya into his circle of influences. Even the still lifes of Dutch artists of the 17th century leave their imprint on Botero’s modern interpretations, especially his unique take on the idea of memento mori. “Just like the French painter Edouard Manet, Fernando Botero makes art for museums,” Sillevis writes. “This is not because he needs affirmation that the quality of his works meets museum standards, but because he wishes to confirm his position in the tradition of the history of art.” In one essay in the catalogue, Edward J. Sullivan examines the history of critical strategies used to approach Botero’s work and its position in the art cannon. Sullivan sees Botero’s art as “an anomaly”—“loved by a wide public” yet ignored by art critics who echo Rosalind Krauss’ opinion that “Botero ha[s] little or nothing to do with contemporary art.” Botero’s baroque technique and inflated characters seems to invite the oversimplification of Botero as “non-committed, non-ideological.” Yet, as this exhibit hopes to prove, Botero “has indeed looked with a critical, if often subtly judicious eye at the realities of the world around him.” 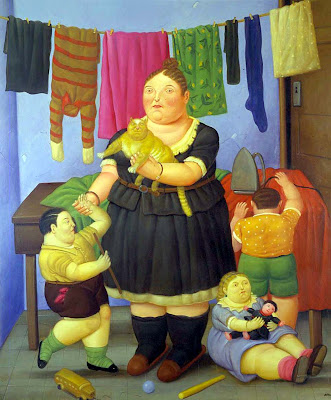 This “subtly judicious eye” appears in works such as The Widow (above), a subtle commentary on the violence and suffering of Botero’s native Columbia in the wake of that country’s political unrest and drug trade. In David Elliott’s essay, “A Painter of Lost and Angry Pictures,” he sees Botero practicing “colonialism in reverse” appropriating art history and reprocessing it for today, thus “[throwing] a firecracker into a party that most people thought was dead and finished long, long ago.” Botero’s political figures, such as The First Lady (top of post) float above the fray, while his religious figures seem unwilling to interfere or powerless to do anything if they were willing. The exhibit includes Botero’s controversial 2005 paintings examining the abuses of Iraqi prisoners by United States forces at Abu Ghraib. They are no less than the twentieth century’s answer to Goya’s The Disasters of War. In an essay in The Nation, Arthur C. Danto calls them “masterpieces of... disturbatory art--art whose point and purpose is to make vivid and objective our most frightening subjective thoughts. Botero's astonishing works make us realize this: We knew that Abu Ghraib's prisoners were suffering, but we did not feel that suffering as ours.” Botero’s “disturbatory art” disturbs even more through his ability to take such specific instances of human grief and to universalize them—The Widow could be from any conflict, the victims of torture beneath the hand of any oppressor. The comic or cartoonish misperception of Botero fades instantly before these images. In this field of oppressor and oppressed, Botero speaks most baroquely and most powerfully. 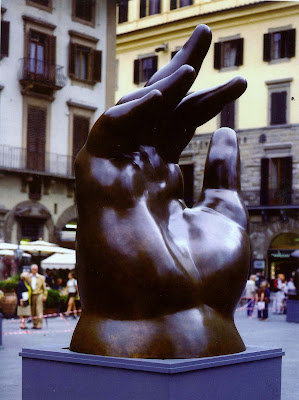 Because of his political message, better known in his native land than in the world at large, Botero cannot safely live in Columbia. Botero’s sculpture Bird, which he donated to his home town, was bombed by terrorists in 1995. Botero donated a new copy of the same sculpture to be placed next to the damaged version, testimony to the power to create, to destroy, and to create again, as hopeful as before. In his sculptures, such as Hand (above), Botero’s sensual appeal, sometimes lost in his paintings, truly takes center stage. “Form is exaltation of nature,” Botero says, “Exaltation of volume. Sexual exaltation.” Botero paints, draws, and sculpts excess in all its forms—sexual, visual, political, spiritual—leaving all the joy and the sadness in, editing out nothing in his brutal, baroque honesty.

The Oklahoma City Museum of Art should be commended for bringing this courageous artist to the American public, especially his views of Abu Ghraib, which will certainly stir political passions. Botero’s baroque world disturbingly reflects the real world, perhaps more now than ever before, and offers a vision of the depths to which humanity can descend and simultaneously, through art, points to the heights to which humanity can hopefully aspire.


[Many thanks to the Oklahoma City Museum of Art for providing me with a review copy of this catalogue and the images from the exhibition.]