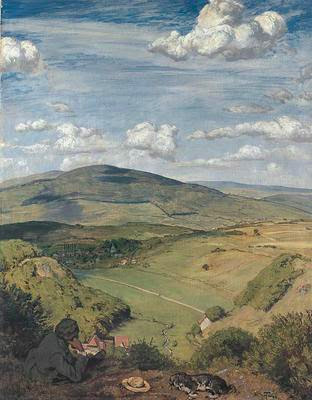 During his lifetime, Hans Thoma, born on this date in 1839 in the Black Forest of Germany, painted scenes of the simple rural life he knew and loved, incorporating the influence of Gustave Courbet into paintings such as Landscape in the Taunus (above). Thoma specialized in the idyll of innocent peasant life, catering to a romantic view of the simple life as the best life and pointing to the past as a golden age unencumbered by the excesses and anxieties of modernity. A painter of clock faces as a young apprentice, Thoma could never have guessed at a future in which his art would be used for sinister purposes during Germany’s descent into fascist madness. 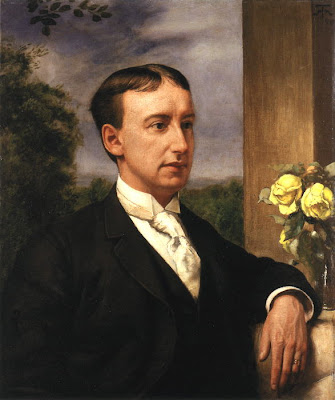 Thoma’s vision of a idealized Germany fit in well with the rebirth of German cultural nationalism in the late nineteenth and early twentieth century. Thoma’s idealizations veer close enough to Symbolism to make them seem completely unreal in their depiction of perfection. The architect Simon Ravenstein recognized Thoma’s Germanic vision as akin to that of Richard Wagner’s operas and paid Thoma to paint a series of frescos based on Wagner’s works in his new home. Thoma’s painting of Wagner’s themes soon led him to meet Wagner’s son-in-law, Henry Thode, whom Thoma painted (above) in 1890. Whether Thoma amplified Wagner’s Aryan traits or simply coupled them to his own is unclear. What is clear is that Thoma’s association with the art of Wagner helped launch him and his art into the realm of volkisch (i.e., Aryan) art for later generations. 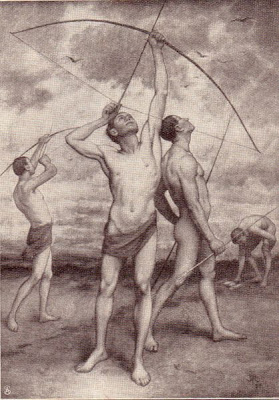 In works such as Archers (above), Thoma represented the nascent cult of the body in Germany that would later play a huge role in the “master race” fantasies of the Nazis and Adolf Hitler. If you didn’t know that Thoma painted Archers in 1915, you might suspect that it was part of the mythic cult of the Aryans so dramatically rendered in Leni Riefenstahl’s propagandistic 1930s films Olympia and Triumph of the Will, which are full of such healthy, scantily clad bodies considered to be the true essence of German power and the life force that would catapult Germany into world dominance. Hans Adolf Buhler, an artist and scholar of Thoma’s work, promoted Thoma as an example of true German art. When the Nazis labeled many modern artists' works as “degenerate art,” it was the works of artists such as Thoma that they praised as the art truly fit for the powerful nation they dreamed they could be. Thoma, who died in 1924, didn’t live to see his art used in this way. Whether Thoma would have approved is something that can never be answered.