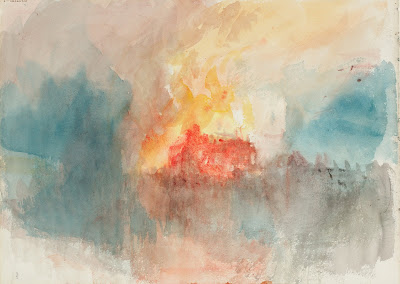 On this date in 1834, the seat of government in Britain was literally on fire. The Palace of Westminster blazed into the night, drawing nearly all of London to see the conflagration. J.M.W. Turner joined those interested parties to witness the destruction, enflamed by the symbolism of the fire as much as by the drama of fire on the waters of the Thames. The J.M.W. Turner exhibition currently at the National Gallery of Art in Washington, DC contains many of the works Turner created from this event, ranging from the pencil sketches he did amidst the jostling crowd to the hurried watercolors (such as the one above) he painted that night in his studio with the colors still fresh in his mind to the finished oil paintings he did to commemorate the event. A legend persists that Turner painted these rough watercolors, stunning in their bold color and free brushwork, standing there in the crowd or from a boat on the Thames, but experts doubt that even as great a watercolorist as Turner could paint under those conditions. As great as the later works are, these early impressions may capture best the uncontrollable nature of the fire engulfing the building and burning an indelible image on the psyche of an anxious nation. 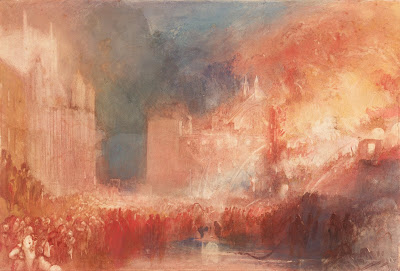 In the catalogue to the Turner exhibition, Sarah Taft writes, “Many who witnessed the fire perceived the destruction of the seat of political power as a metaphor symbolising the need for more drastic revisions of the parliamentary system.” As the masses clamored for greater representation, many called for the house of government to be burned down entirely, leading to fears of the same anarchy witnessed not long before in France during the French Revolution. In the more finished watercolor above, Turner includes recognizable citizens witnessing the fire. After the fire had been ruled accidental, calming fears of arson, rebuilding began in earnest, resulting in the completion in 1844 of the Houses of Parliament we know today. Turner later saw through the press engravings of his finished images of the fire, capitalizing on the public’s hunger for commemoration but also its need to understand the cataclysmic event in some way. 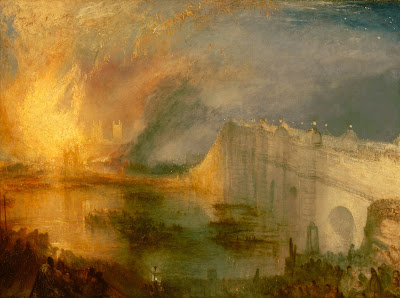 Through his art, Turner explained the “meaning” of the fire to the public, or at least what he hoped it would mean to them. In one of Turner’s two finished oil paintings of the subject (above), Turner shows the amassed people of London as prominently as the burning building itself, contrasting the old order coming down and the new populist order taking its place. Gillian Foster, writing in the exhibition catalogue on Turner’s handling of history, both ancient and modern, believes that the many unfinished works Turner left to posterity “suggest that Turner at this period may have been suffering from a crisis of confidence, if not in his own capabilities, thank in the might of his nation.” If lack of finish indicates doubt, the finish of the PMA’s version above demonstrates finely polished confidence in the people. This is my favorite painting in the entire collection of the PMA. I once sat in front of it for 40 minutes, drinking in the detail until a tour group snapped me out of my reverie. Over time, I’ve seen the gathered masses drawn not as moths to a flame as much as a tribe answering the same basic instinct that perpetuates the Burning Man phenomenon today and, perhaps, riveted me to the spot. Turner does his duty as a good Englishman here, placing his faith in the people that all will end well. The burning Houses here stand not as a sign of a failing empire but as a beacon of hope, a rising sun of flame shining down upon a new order assembled as one.

[Many thanks to the National Gallery of Art in Washington, DC for the images above from the J.M.W. Turner exhibition.]