Charles-Edouard Jeanneret-Gris, better known as Le Corbusier, brought modern art to architecture, for better or worse. Born October 6, 1887, Le Corbusier not only recreated himself by adopting a new name (a variation on his maternal grandfather’s name, in fact) but also recreated architecture by bringing in such diverse artistic visions as Leonardo Da Vinci’s Vitruvian man and the Surrealist art of Giorgio De Chirico in creating spaces within which people could live and work. Villa Stein in Garches, France (above, built in 1927) displays Le Corbusier’s mathematical bent, modeling a living space on the same human proportions diagramed in Leonardo’s Vitruvian man. His almost utopian faith in mathematics and architecture as mathematics physically realized pushed Le Corbusier to create such buildings and to promote his unique vision of urban planning that lingers yet today. 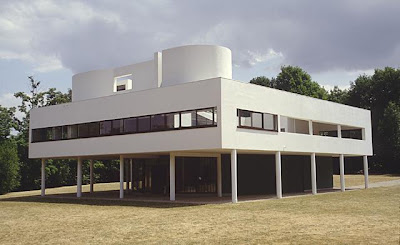 In 1929, Le Corbusier created his signature building—Villa Savoye. Villa Savoye exemplifies the five points of Le Corbusier’s architectural philosophy: raise the building from the ground on stilts to create a sense of lightness; build non-weight-bearing walls to allow the architect freedom in their design; create open interior floor plans free of weight-bearing walls that would hinder room configuration; add long banks of windows to give a sense of connection with the outside; and create green spaces on rooftops to replace the natural settings swallowed up by the concrete footprint. Villa Savoy is a modern sculpture in of itself, a building technically impossible before the late 1920s. In many ways, Le Corbusier’s imagination had to wait for technology to keep up, but when it did, he exploited every possibility in creating an atmosphere of total freedom. Sadly, today, these concrete buildings seem more sterile than liberating, claustrophobic in their technology. The windows facing out onto nature outside and on the roof above become barriers rather than openings in our imagination.

In his Chapelle Notre Dame du Haut in Rochamp, France (above, from 1950), Le Corbusier marries his technological faith with Christianity, arriving at a stark, white building that seems Surreal in its oddity and emptiness rather than intriguing and inviting in its uniqueness. The walls appear as lonely as the desolation found in the paintings of De Chirico. Any Christianity inside seems trapped in a concrete shell rather than streaming out in glory as with the finest chapels of the Middle Ages. Today, Le Corbusier’s ideas on urban planning linger on in the many decaying high rises major cities built to house the poor. Rather than promoting community, these high rises have caged their inhabitants in concrete, steel, and glass, coldly separating them from the rest of society, neither seen nor heard in these monstrosities, and thus, forgotten. Le Corbusier clearly meant well, believing wholeheartedly that technology and science could cure all ills, but time has taught us that his faith, like many others, was poorly placed.
Posted by Bob at 5:40 AM