The Canals of Venice 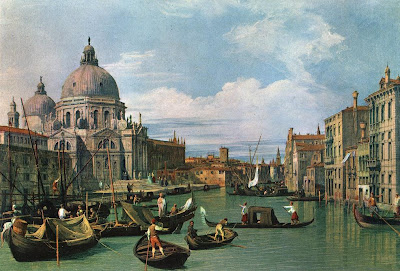 Giovanni Antonio Canal, better known as Canaletto, was born October 18, 1697 in Venice, Italy. Son of Bernardo Canal, a theatrical backdrop painter, Canaletto soon learned the techniques of painting beautiful scenery, which he soon translated to smaller canvases. As a young man, Canaletto painted out of doors, creating realistic scenes of his hometown such as The Grand Canal and the Church of the Salute (above, from 1730). The justly famous light of Italy shines through Canaletto’s paintings, which capture the subtle atmospheric effects that would later inspire artists such as J.M.W. Turner and the Impressionists. Over the years, Canaletto worked more in the studio, but lost little of his clear eye for the beauties of nature. 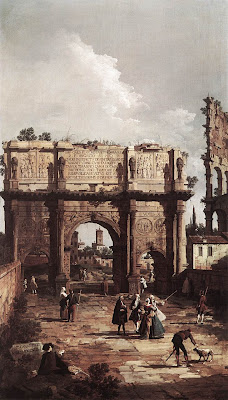 During Canaletto’s lifetime, Venice starred as one of the highlights of the Grand Tour that every respectable Englishman and woman felt necessary to take. Canaletto seized upon the opportunity to sell paintings to this burgeoning market and created picturesque works such as Rome: The Arch of Constantine (above, from 1742), which was purchased by the British Consul in Venice, Joseph Smith. Smith later sold his large collection of Canaletto’s work to King George III of England. Today, the Royal Collection still contains many works by Canaletto, including Rome: The Arch of Constantine. Canaletto’s images helped fuel the hunger for European travel in England and a love of classical history that would become a hallmark of Romanticism.

British fascination eventually drew Canaletto to England to be closer to his audience. Moving to London in 1746, Canaletto soon began to paint picturesque scenes of England itself, such as London: Westminster Abbey, with a Procession of Knights of the Bath (above, from 1749). Sadly, Canaletto’s style soon became mannered through the repeated painting of the same touristy images for the same patrons. This decline led to rumors that the Canaletto in London was not the real Canaletto, since several artists came to use that moniker. In fact, Canaletto’s nephew and student Bernardo Bellotto also became known as Canaletto, mainly in Germany and Poland, adding to the confusion. During his heyday, however, Canaletto’s style was clearly identifiable, leading Turner to pattern his own unmistakable skies after those of Canaletto’s Venice views, ensuring Canaletto a place forever in art history.