The Art of Death 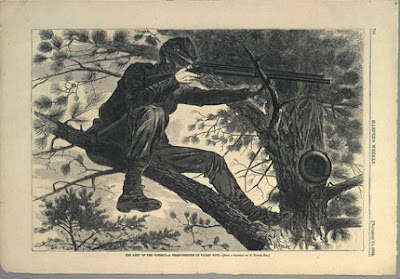 While recently reading Drew Gilpin Faust’s This Republic of Suffering: Death and the American Civil War, which brilliantly covers the entire range of that period’s relationship with death, including the act of killing itself, I was surprised, but shouldn’t have been, to find Winslow Homer’s Sharpshooter on Picket Duty (above, from 1862). Born February 24, 1836, Homer served as an artist-correspondent for Harper’s Magazine during the American Civil War, sketching and painting many images that would be translated into etchings for mass consumption. Homer painted many scenes of everyday Union Army life, but also included disturbing images such as that of the sharpshooter. Faust explains how the improved rifle technology increased the accurate range of the shooter, allowing snipers to kill from seemingly out of nowhere at any time, thus inspiring an endless sense of dread that death could come at any moment. Such sharpshooters became pariahs among even their fellow soldiers, with their green camouflage uniforms leading others to call them “snakes.” Homer himself failed to understand the psychology of these cool killers. "I looked through one of their rifles once,” Homer wrote years later. “The impression struck me as being as near murder as anything I could think of in connection with the army and I always had a horror of that branch of the service."
Even Homer’s images of moments of tranquility in wartime such as Home, Sweet Home (above, from 1863) hold the sense of impending death. The two men in the foreground listen to the band in the distance play the song “Home, Sweet Home,” but any memories of domestic bliss only make the reality around them seem that much bleaker. It was such moments in the camps that would often be interrupted by the bullet of a sharpshooter or a shell fired from a great distance. Faust writes of how the death of some men eating dinner in a tent hit by an exploding shell shocked the survivors more than the deaths they witnessed in combat. Entering combat at least prepared soldiers for the worst, whereas death in times of ease planted the seeds of unrest that slowly drove men insane with worry over forces beyond their control. Snipers and artillerymen, aided by enhanced weapons, seemed like cruel gods of fate looking forward to shattering moments such as listening to music in camp solely for the pure irony. 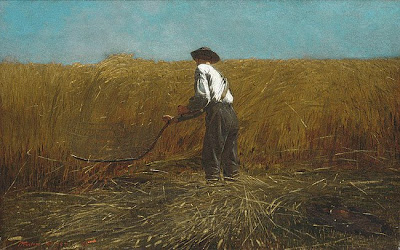 Homer’s The Veteran in a New Field (above, from 1865) shows how even the end of the war itself couldn’t end the hold of death upon those who had fought and those who had waited for those fighting to return. Sweeping his long scythe like the Grim Reaper himself, the veteran strips off his uniform jacket and gets down to the work of the farm seemingly at the very moment of his return, hoping to work away the blood staining his hands. The cloverleaf insignia on the soldier’s canteen identifies him as a member of the First Division of the Second Corps of the Sixty-first New York Volunteers and the farm itself comes from Belmont, Massachusetts, but the man himself is everyman of the Civil War and, by extension, any war. Despite the success of his Civil War work, Homer never returned to the role of war correspondent, leaving that job to younger, less-jaded eyes. Homer saw too much death during the Civil War to want to see more. For the rest of his career, Homer searched for images of human reconciliation with nature, often through hunting and fishing. Yet still, those images continued the art of death for Homer and never bridged the gap that the Civil War had torn open.
Posted by Bob at 12:01 AM

It’s so nice site. We love to see more on this site. Keep on updating… MonkAreYou Bali *dfghjklkk