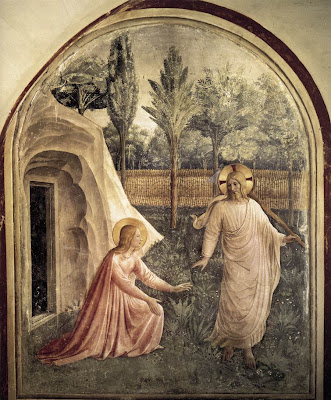 In 1982, Pope John Paul II beatified Guido di Pietro, thus making the “angelic” in his better known nickname, Fra Angelico, official. Fra Angelico died February 18, 1455 with his legend already forming around him. Born around 1395, the height of Fra Angelico’s artistic afterlife came in the star treatment he received in Giorgio Vasari's Lives of the Artists, in which Vasari proclaims Fra Angelico as possessing "a rare and perfect talent." Works such as Noli me Tangere (above, from 1440-1441), one of the many frescoes adorning the walls of the monastic cells of San Marco in Florence, show just how untouchable Fra Angelico was not only in terms of talent but also in terms of religious fervor. The newly resurrected Jesus turns to Mary Magdalene as she reaches to touch him to see if he’s real and tells her “Do not touch me.” Whereas Michelangelo and other artists of the Renaissance created works primarily for a wide audience, Fra Angelico created these frescoes for an audience of one, usually a solitary monk meditating on the mysteries of Christian miracles. The beautiful natural detail of the trees and greenery as well as the fidelity of the early morning sunshine flooding the scene would focus the mind of the worshipper, perhaps bathed in the same morning light rushing through his window. 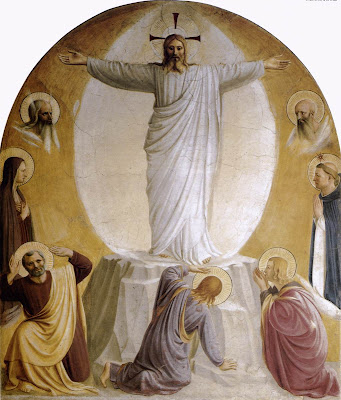 If I could go back to Florence someday, I would make up for my greatest mistake during my trip there—not going to see the frescoes of San Marco. Like Rome, Florence offers so many artistic treasures that you could spend a lifetime there studying works such as Fra Angelico’s Transfiguration (above, from 1440-1441), another San Marco fresco. I admit that Fra Angelico’s works sank to the bottom of my “must see” list because they lack the bombast of so many other Renaissance works, which grab you with the intensity of their vision and their thrilling, celebratory humanism. Fra Angelico speaks in much softer tones. His Transfiguration gathers together all the usual suspects of the scene, but he resists crowding in too much of a heavenly host. Similarly, he fights back the urge to paint Jesus’ transfigured glory in Technicolor brilliance. Instead, he actually scales the scene back to a degree that the individual can perceive and apprehend more fully. The Transfiguration is all about overwhelming power, but Fra Angelico underwhelms in the name of understanding, lowering the volume to a level in which an individual could exist before the work for extended mediation. 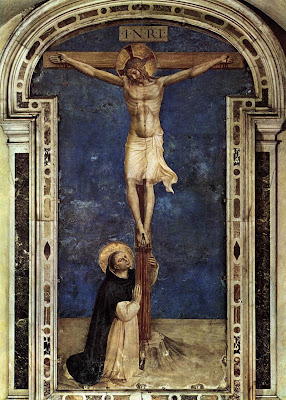 According to tradition, the portrait of Saint Dominic in Saint Dominic Adoring the Crucifixion (above, from 1440-1441) is a self-portrait by Fra Angelico. This Crucifixion scene appears in a hallway of San Marco, near a staircase. The hallway provided more room for this vertical composition, which explains why it’s in a more public place than one of the meditational cells, but I wonder if Fra Angelico felt comfortable in putting his face “out there” in such a visible way. On the other hand, Fran Angelico had a reputation of being a deeply religious man, even among other monks. Vasari tells stories of Fra Angelico weeping as he painted scenes of Christ’s passion and death. Maybe this is the way Fra Angelico wanted later generations to see him—as a simple monk devoted to spreading the word of God. It took five centuries for Fra Angelico to amass enough verified miracles to reach beatification, but if the Catholic Church had looked closely upon his miraculous works of art, they would have sainted him almost immediately.
Posted by Bob at 12:01 AM