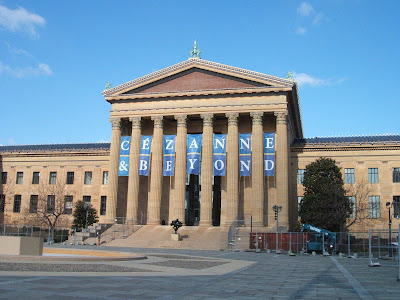 “Cezanne has never looked younger!” beamed PMA curator Michael Taylor at today’s press preview for the blockbuster exhibition Cezanne and Beyond. The culmination of 13 years of work since the 1996 Cezanne exhibition at the PMA, Cezanne and Beyond stunningly portrays the power of Cezanne’s influence on a wide range of artists across the entire twentieth century into the twenty-first hailing from all over the globe. PMA curators Joseph J. Rishel, Kathy Sachs, and Michael Taylor have done better than resurrect the old Cezanne—they’ve made Cezanne our contemporary. 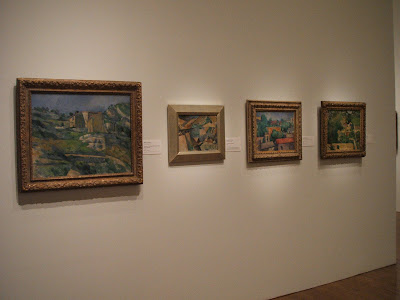 By juxtaposing works by Cezanne with those influenced by him (above), the side by side comparisons really show the nature of influence between great artists, which the curators called more of a “resonance” than a direct following leading to derivative works. For example, after seeing the watercolors of Charles Demuth inspired by Cezanne’s watercolors, you appreciate the art of Demuth on its own merits, but you really understand the power of Cezanne’s watercolors, which I’ve always thought have been grossly underestimated. As Joe Rishel remarked, the fifty works by Cezanne in the exhibition provide a wonderful retrospective by themselves. 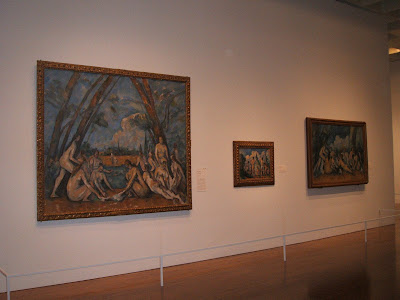 The PMA’s powerful Cezanne collection makes them the perfect (and for this exhibition, only) venue for this show. The PMA places its Large Bathers beside the National Gallery of London’s version (above), providing an opportunity for comparison not seen since the 1996 retrospective. (If only The Barnes Foundation could have allowed their version to join its siblings…) Dipping into their own collection again and again, the PMA gathers together Pablo Picasso, Henri Matisse, Jasper Johns, Ellsworth Kelly, and others to pay homage to Cezanne. Cezanne and Beyond is a Cezanne showcase, of course, but it’s also a tribute to the quality and breadth of the PMA’s collection. 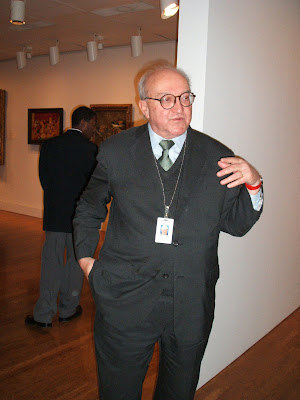 The highlight of the press preview for me was the opportunity to hear Joe Rishel (above) speak. His warm and witty voice pervades the entire show, just as the spirit of the late Anne d’Harnoncourt, to whom the exhibition is dedicated, hovers over it. Rishel stressed the humor of many of the pieces, just part of the show’s intent to show that Cezanne and all of these artists are as alive today as they ever were thanks to their continuing influence on the artists of today—not only still-living canonical artists such as Johns, Kelly, and Jeff Wall, but also newer artists such as Sherrie Levine and Francis Alÿs. Survey-style museums such as the PMA always face the danger of stagnating in the public’s perception, always being about the distant past. Cezanne and Beyond brings Cezanne to life brilliantly and stakes a claim for the museum and art itself as a vital and important piece of the here and now. 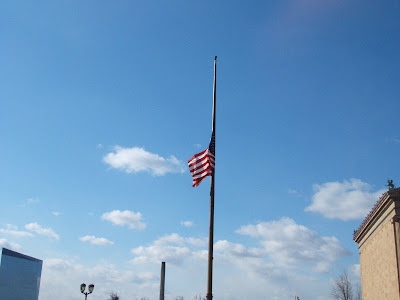 —As much as the preview of Cezanne and Beyond was a celebration, it was hard not to think about the funeral of slain Philadelphia police officer John Pawlowski taking place at the same time at the other end of the Benjamin Franklin Parkway. Philadelphia has seen too many of their police killed recently. The PMA lowered their flag to half mast (above) in Officer Pawlowski’s memory.
—Before entering the exhibition area, I saw a man in the restroom who could have passed for Cezanne’s twin. He turned out to be another member of the press, but if he’d handed me an apple and mumbled something in French, I would have believed that old Paul had returned from the beyond.
—The Cezanne and Beyond gift shop is offering large lenticular versions of several paintings, including one version of The Card Players and a still life. Cezanne played enough games with depth and perspective that the paintings themselves are disorienting, but looking at these lenticular versions almost gave me vertigo.
—The gift shop also already had t-shirts for the Arshile Gorky exhibition coming this October. PMA PR Director Norman Keyes introduced Michael Taylor’s Gorky contributions to Cezanne and Beyond as an amuse bouche for the Gorky retrospective. (I freely admit that I had no idea what an amuse bouche was before I started watching Top Chef.)

—I looked long and hard at Picasso's The Dream, but couldn't see any evidence of where its owner, casino mogul Steve Wynn, accidentally poked a hole through it. Kudos to the restorers! Here's hoping you got a better tip than just free breakfast at the Bellagio.