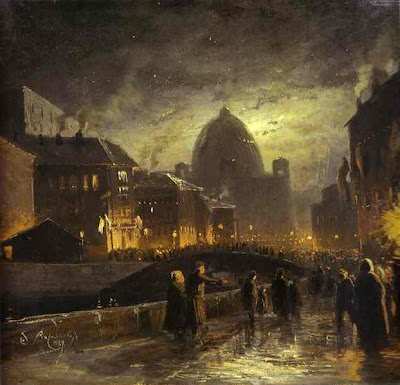 At the tender of age of just 13, Fyodor Vasilyev began taking classes at night to learn how to paint. Born February 22, 1850, Vasilyev felt pressure to support his family after the death of his father and hoped to take the skills he’d learned as a painting restorer and use them as a maker of pictures himself. A few years later, Russian landscape painter Ivan Shishkin fell in love with Vasilyev’s sister and soon began teaching Fyodor his secrets. Shishkin eventually introduced his young protégé to other great Russian painters of the time, including Ilya Repin, who also took Vasilyev under his wing. Before turning twenty, Vasilyev, the boy wonder of Russian painting, was creating works such as Illumination in St. Petersburg (above, from 1869). It is truly amazing just how quickly Vasilyev put into practice the lessons and advice he received. Illumination in St. Petersburg looks like something Whistler might paint if he found himself in Russia on a cold, dark night pierced by gaslight. The way the moon silhouettes the great dome in the distance like a white nimbus brings the entire picture together. The quick execution of the people bustling along the street brings to mind the Parisians of the Impressionists, just beginning to work around the same time. 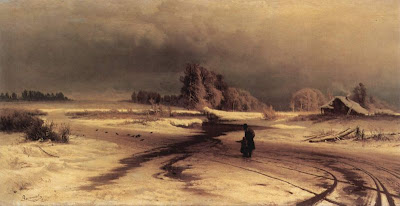 Like the Impressionists, Vasilyev was influenced by the artists of the Barbizon School, such as Jean-Baptiste Camille Corot, Jean-François Millet, and Théodore Rousseau. Vasilyev most likely learned of the Barbizon style through Shishkin, but once he knew the basics of the style, he quickly made it his own. Vasilyev’s Thaw (above, from 1871) unites the bleakness of earth and sky in the middle of an unforgiving Russian winter. The sky seems almost more solid than the ground, which is divided by swirling ruts that reveal the dark earth beneath the snow and give the surface as much a sense of movement as the clouds above. The great horizontals of Thaw make it seem to extend forever—as “endless” as the famous Russian winters themselves. Vasilyev takes care to derive maximum drama from every element of nature, just as Corot, Millet, and Rousseau took the Forest of Fontainebleau and squeezed every last drop of interest from it. 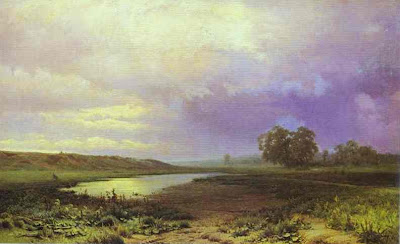 Vasilyev’s Wet Meadow (above, from 1872) shows how he was able to do more than winter snowscapes. The richness of detail in the foreground enhances the sense of depth as Vasilyev moves back into the picture plane and softens the focus. Again, the clouds above rival the best that the Barbizon artists have to offer. Still only 22 years old, Vasilyev seemed poised to rule over the Russian art world for decades. Sadly, after a little more than a year after painting Wet Meadow, Vasilyev was dead, a victim of tuberculosis. Vasilyev’s tuberculosis forced him to paint indoors. He painted Wet Meadow entirely from memory. Just as he was gaining fame and seeing more that Russia’s great landmass had to offer as subject matter, Vasilyev’s life and career were over. Fortunately, Vasilyev lived on in the sense of influencing the next generation of Russian landscape artists, who followed his example of taking the best of the French style and making it distinctly Russian.

Hi, I would like to have a book that has Vasilyev paintings. Do you know of any book that would have this? Carmen