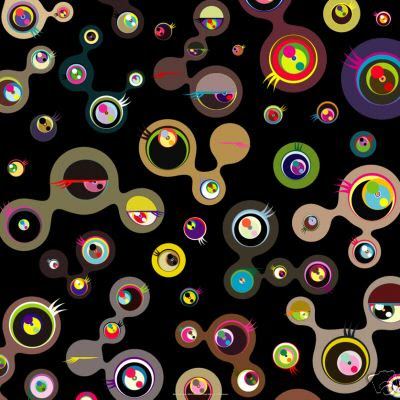 If there’s an Andy Warhol-type artist out there today, it’s not Damien Hirst—it’s Takashi Murakami. Born February 1, 1962, Murakami’s built a smaller, yet still formidable commercial profile than Hirst, but one that’s much more appealing in its whimsy and cross-cultural freshness. Just last year, Time Magazine named Murakami one of their 100 Most Influential People—the only artist to make the list. While Hirst continues to slice and dice animal corpses and embalm them (when he’s not festooning skulls with diamonds), Murakami creates images such as Jellyfish Eyes Black 4 (above, from 2006) that appeal to the modern market for less confrontational pieces. Just as Warhol rose to prominence as a prankish antidote to the angst of the 1960s, Murakami’s dancing jellyfish eyes calm and soothe viewers and buyers who don’t feel the need for Hirst’s reminders of mortality’s inevitability in a world in which every news day provides plenty. 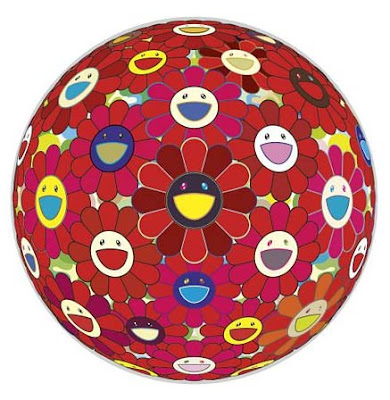 Murakami wisely rides the same tide of growing interest in anime and manga in America in creating his art. Red Flower Ball (above, from 2007) shows the influence of anime and manga characters on Murakami’s art. Those who recoil from the idea of Japanese cartoon imagery rising to the ranks of fine art should remember that Roy Lichtenstein once took a great deal of heat for his comic book-inspired paintings that now find a place in the art historical canon. Like Warhol, Murakami employs an entire “factory” of artists to carry out his ideas. Playing the “idea man” at the front of the enterprise, Murakami sports a ponytail and stylish round glasses as part of the marketing package. Most Americans don’t realize just how integral anime and manga are to Japanese culture. Over there, they’re far from just kid’s stuff. Murakami takes the cultural currency of his native Japan and converts it into something an international, primarily American audience can also appreciate. 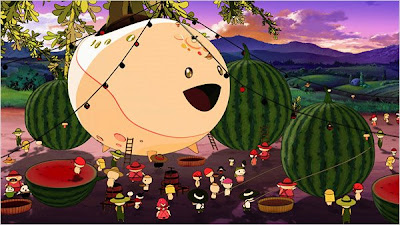 The sheer prolific power of Murakami across multiple media places him light years ahead of Hirst, Jeff Koons, and others clamoring for the spotlight. In Planting the Seeds, a 10-minute animated film from 2007 (a still from the film appears above), Murakami completely enters the anime world. Planting the Seeds features two spirit guides traveling the universe in a living spaceship that symbolizes the earth itself. Without missing a beat, Murakami can turn from something as unique and deeply thoughtful as that ecological message to designing a new logo for Louis Vuitton. Murakami is without doubt a creature of the modern business world, but I never get the sense that he’s completely sold out on his artistic principles in the service of mammon. Perhaps that will change. Warhol became a caricature of himself over time, when his impulse for being famous overpowered his impulse to create great art that would lead to being famous. Murakami so far continues to maintain his balance while crossing over and crossing back between the borders of art and commercialism, sometimes blurring those lines when necessary. If as many people who know the name of Damien Hirst knew the name of Takashi Murakami, the contemporary art world would be a better and saner place.
Posted by Bob at 12:01 AM