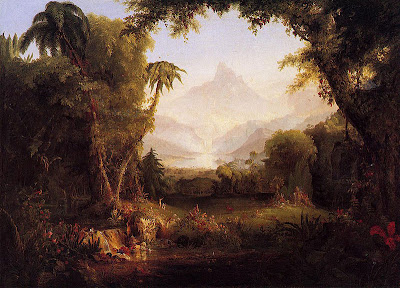 I’ve always found it fascinating how the first quintessentially “American” school of thought—Transcendentalism—borrowed heavily from non-American sources. Ralph Waldo Emerson, Henry David Thoreau, and others drew heavily from Eastern mysticism, Immanuel Kant and German Idealism, and Emanuel Swedenborg. Of course, all things quintessentially American came from somewhere else, the “mutt” leader of the world. Even Thomas Cole, the lead member of Transcendentalist-tinged Hudson River School, the first American art movement, came from England. Born February 1, 1801 in Lancashire, England, Cole was 17 years old when he first came to America, moving about with his family until finally formally learning painting at the PAFA in 1825. Soon after, Cole set out on his career of painting spiritually moving landscapes of American scenes of New England and the Catskill Mountains of New York. Yet, Cole resists the label of a purely “American” painter. Cole always painted some version of paradise, sometimes literally as in The Garden of Eden (above, from 1828). Regardless of location, the perfect landscape always existed in a timeless, locationless place in his imagination. 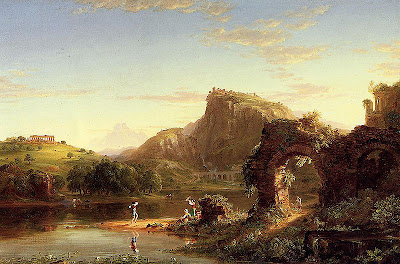 Cole spent several years in the early 1830s and early 1840s living in England and Italy. In Landscape and Memory, Simon Schama argues that landscape painters are shaped in part by the landscape before them. In other words, the local growth of the American scene provides different materials than the forests of England or Europe, which then influence the work of the artist. Cole saw enough of these different landscapes that they eventually mingled into the “idea” of a landscape over time. A good Transcendentalist, Cole transcended the mundane facts of the landscape and struck at the spirit of the woods. Cole’s L'Allegro (Italian Sunset) (above, from 1845) borrows a title from the British poet John Milton and sets itself in Italy, but the idealized light and pastoral sensibility come entirely from the amalgamation in Cole’s head and heart. The liveliness of the upbeat figures in the foreground contrasts sharply with the deathly stillness of the classical ruins far in the distance. Cole painted series such as The Course of Empire and The Voyage of Life as overt allegories, but for him every landscape was an allegory. 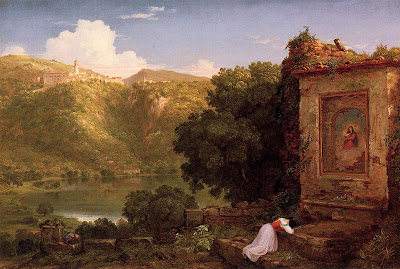 Cole also painted Milton’s pendant poem to L’Allegro, Il Penseroso (above, from 1845). The prone, pensive figure before the religious ruin in the foreground resembles one of the figures seen dancing in L’Allegro. Like Milton, Cole wants to offer both sides of the human emotional coin. The ancient-looking icon is pure Old World, but the abundance of greenery speaks more of the still-virginal American forests of Cole’s day. Cole perfectly combines the wisdom of the ages of Western Civilization with the fresh perspective of the rising American experiment. Again, this combination is, paradoxically, exactly what makes it so “American” in nature. Cole’s Europeanism resembles Milton’s classicism in that both take the lessons of yesterday to construct new meanings for their own age, and ours. Never a slave to realism, Cole painted more realistic landscapes by delving into his soul and the souls of other thinkers and artists and assembling a landscape more of meaning and memory than just trees and grass.
Posted by Bob at 12:01 AM