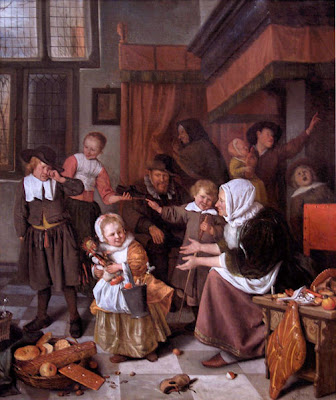 Of all the painters of the Dutch Golden Age, Jan Steen seems like the one who had the best time without destroying himself. Buried on February 3, 1679, Steen, born 1626, excelled at painting genre scenes that celebrate the everyday life of the family, such as his The Feast of Saint Nicholas (above, from 1665-1668), which shows the December 5th holiday in which St. Nicholas comes to visit Dutch children and leaves gifts for those who have been nice and coal for those who haven’t. You can feel the joy of the little girl in the center tightly clutching the little doll she has just received. A boy on the right sobs because he has received coal, while another boy points at him and gloats. In the background, the father of this clan sits quietly and soaks in the moment. I imagine Steen doing likewise in his own life. Unlike Rembrandt, Steen’s older contemporary, Steen never took students, but he did develop a lucrative business of painting to the tastes of contemporary buyers, but without compromising quality. The frenzied, complicated composition of the painting perfectly captures the chaos of a Christmas morning full of excited and disappointed children. 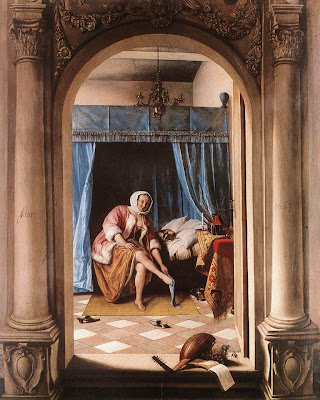 Steen studied the works of Frans Hals, another older contemporary, hoping to reproduce the same great combination of studied technique and spontaneous liveliness. Steen’s The Morning Toilet (above, from 1663) hints at the risqué moment when a curvy young woman pulls off her stocking. Her direct stare at the viewer suggests that she’s not some innocent babe. Clues such as the Cupid appearing above the archway may hint at her profession as a prostitute, but if she is, Steen has placed her in a high-class setting. The illusion of the archway framing the young woman in the distance creates a sense of dignity not usually associated with the oldest profession. Hals would have made the woman’s role more distinct, but Steen instead adds a layer of mystery that allows him to show off his skills in rendering fabrics and the tiled floor. The skull acts as a memento mori, reminding us that the pleasures of the flesh are momentary, but death is forever. 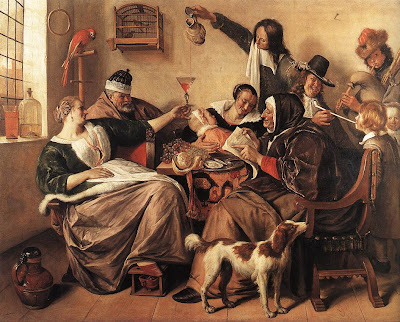 Steen loved to add proverbs to his paintings, sometimes even inscribing them onto his paintings. In The Artist's Family (above, from 1663), the old woman sings a song reading the lyrics on the paper. In Dutch, it reads “I lead, all follow suit.” Steen paints himself handing a boy a pipe, instructing him to follow his example in enjoying a good smoke. Everything in the painting follows suit, a vast chain of cause and effect—the very essence of a family. Parents beget children, who, in turn, beget grandchildren, with each generation patterning itself on those that went before. As in The Feast of St. Nicholas above, The Artists’s Family swirls in a kind of tumult, but the tumult of life rather than strife. I much prefer these movable feasts of bodies over the dry, still as statues brand of group portraiture. Steen captures the actual life of his family in motion and interaction. It remains poised without being posed. Anyone who’s tried to take a family picture and waited for everyone to hold still knows it’s impossible. Action shots are always the best, anyway, and the most true to life.
Posted by Bob at 12:01 AM

very nice and informative site.. i have a great time reading all your topic.. keep it up and hope to read more soon.