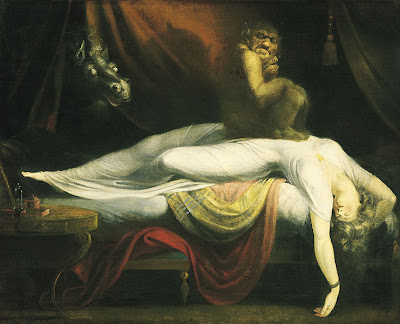 When William Blake calls you an influence, you know your art is unique. Henry Fuseli, born Johann Heinrich Füssli on February 7, 1741 in Zurich, Switzerland, left his greatest impression on the art world of England. Fuseli’s best-known painting, The Nightmare (above, from 1781), contains all the typical hallmarks of the Fuseli style—macabre, nightmarish subject matter; wonderfully rich colors and textures; and almost Michelangelo-esquely expressive nudes or near-nudes. The woman in The Nightmare wears a dress so shear that she might as well be nude. Fuseli remains significant today not only because of the psychological impact and beautiful technique of the works but also for his place in the early days of the Romantic art movement that would sweep across nineteenth-century Europe and echo through Western art ever since. Friend to figures such as pioneering feminist Mary Wollstonecraft (whose portrait he painted), her husband, writer and philosopher William Godwin, scientist Joseph Priestley, philosopher Erasmus Darwin, and essayist Thomas Paine, Fuseli helped stage the nightmare of European royalty that Romanticism became in its revolutionary form. 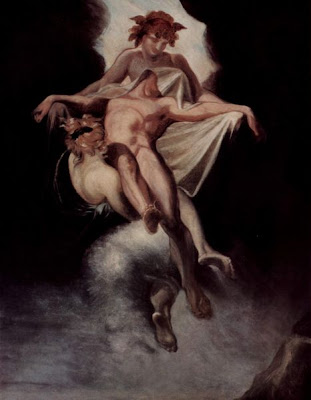 A friend with a much greater appreciation of the fantasy art world recently clued me onto amazing artists such as Michael Parkes and Jeffrey Catherine Jones, whom my friend called “a feminine Frank Frazetta.” I remember buying Conan the Barbarian magazines as a kid and staring at the incredible Frazetta fantasy art (and not just because of Red Sonja). In many ways, Fuseli is the Frazetta of his time, illustrating many classic works of fiction in an imaginative style beyond the works themselves. Working in England, Fuseli couldn’t avoid illustrating the works of William Shakespeare and contributed to a famous Shakespeare Gallery of the time. Fuseli later opened his own gallery featuring his illustrations of John Milton, which were just as amazing as his Shakespeare-inspired paintings but not as commercially successful. I’ve always been drawn to Fuseli’s depictions of Homer’s Iliad, such as Sleep and Death Carrying Away Sarpedon of Lycia (above, from 1803). Sarpedon, a mortal son of Zeus, dies while fighting for the Trojans at the hands of Patroclus. Zeus morns the death of his son and showers the Trojans with bloody raindrops as his tears before asking Sleep and Death to carry Sarpedon’s corpse away. If the Iliad is the original sword and sorcerer tale, then Fuseli is the original Frazetta. The amazing foreshortening of Sarpedon’s lifeless leg brings to mind the finest of the Renaissance draftsmen. 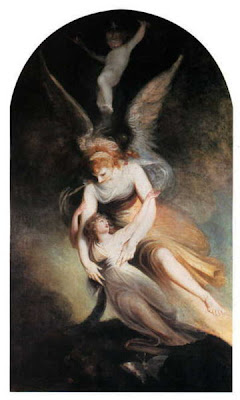 Death and the afterlife may have held a special significance for Fuseli. Before becoming a painter, Fuseli studied to become a priest, even taking orders before having to flee his native Switzerland and become a nomadic writer and artist. Sir Joshua Reynolds, ironically Blake’s antithesis, recognized Fuseli’s talent early on and encouraged him to study art full time, which led Fuseli to make a pilgrimage to Italy and learn from the works of the Renaissance masters. In works such as The Apotheosis of Penelope Boothby (above, from 1792), we see the Renaissance religious sensibility translated by Fuseli into the late Romantic idiom. The angel could easily have fallen from a sixteenth century altarpiece, but the woman clearly rises from the late eighteenth century. Fuseli channels his religious fervor into artistic fervor, making a god of imagery to generate a fantasy of a better place in a world that sometimes seemed godless. I don’t know how strong a believer Fuseli was, but I believe in the power of his images to build entire worlds that seem strangely possible.