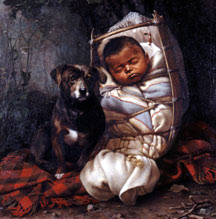 Growing up in California, Grace Carpenter Hudson watched her mother teach the local Pomo Indian children, one of the first whites to bring school education to that tribe. Born February 21, 1865, Hudson developed an early fascination with the customs of the Pomo as much as with the Pomo people themselves. After years of learning art and attempting portraits and other genres, Hudson finally decided to indulge her interest in the Pomo Indians and painted National Thorn (above, from 1891), which promptly won awards and gained Hudson widespread fame as a painter of “Indian” pictures. Much of the American Indian painting genre consists of “manly” visions of violence and Wild West theatrics ala Frederic Remington and his kind that is long on drama but often painfully short on the facts. Hudson’s close association with these native people allowed her access to the facts of the case, but it is her empathy for the Pomo that really sets her apart from the crowd. Some may argue that it took a woman artist to recognize the humanity of Native Americans, but I think that it was more a case of her upbringing emphasizing the fundamental humanness of the Pomo that shaped her view of them. 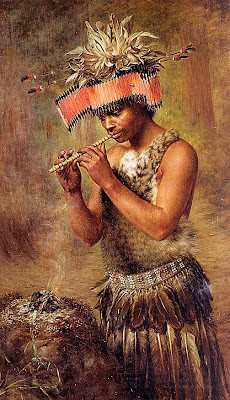 By the time that Hudson began to paint the Pomo and record their customs and way of life, the Pomo and most other Native American groups were already beginning to disappear and assimilate into American culture. Paintings such as The Seed Conjurer (above, from 1896) hint at a larger mythology of the Pomo without giving any further detail. Both Hudson and her husband John collected Native American artifacts, which helped provide props for Grace’s paintings. What I feel is most appealing about Hudson’s paintings is the fact that the subjects are people first and Native Americans second. The Seed Conjurer refuses to transform the man into some magical shaman but rather shows him as simply a human being practicing his religious beliefs. Hudson’s paintings push back at the dehumanizing forces that helped make the alienation and forced migration of the Native Americans palatable to the general public. 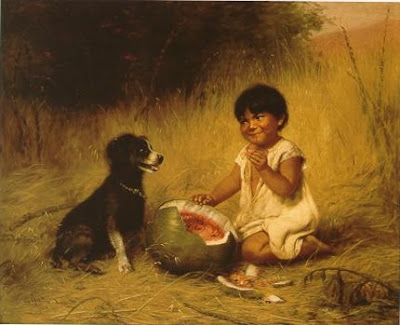 Because of her deep affection for the Pomo people, many of Hudson’s paintings, especially the later works, slip from the edge of empathetic into the swamp of sentimentality. The Watermelon (above, from the 1920s) shows a young Pomo child “sharing” a ripe watermelon with his much too adorable dog. During her travels to Hawaii and the American Midwest, Hudson tried her hand at painting other indigenous groups, but she never found the same personal identification with them that she had built with the Pomo. Hudson painted almost seven hundred paintings related to the Pomo people over four decades, so you can forgive her for falling into the trap of popularity and eventually repeating herself and diluting the power of her earliest works. Because of such kitsch-like evocation of children and animals, Hudson’s reputation has taken a bit of a beating over the years. Hudson offers a wholly different view on the approach of Western art to Native Americans that makes the scenes of cowboys and Indians seem incomplete and downright childish.
Posted by Bob at 12:01 AM

1: If you are inte"Undergraduate education should adopt the ³Student as Scholar² Model
throughout the curriculum, where scholar is conceived in terms of an
attitude, an intellectual posture, and a frame of mind derived from the bestrested in online degree education from a well reputed & world famous university then visit our website to get a degree for low price
2: Complete your higher education degrees through online from a well reputed university at a reasonable price as per your schedule, for more information visit our web site
3: Complete higher education from your office cabin or from any where else through distance education. We provide you the best degree in a short period of time. For more information visit our website best university gurukulam.

Hey thats a painting of my Great great Grandfather