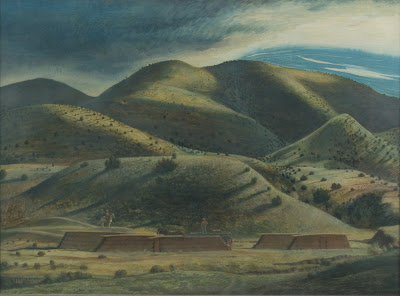 When Peter Hurd burst upon the scene in Chadds Ford, Pennsylvania, looking to study under N.C. Wyeth, he must have been quite a sight. Born February 22, 1904 in Roswell, New Mexico, Hurd looked and acted like the cowboys N.C. was painting as illustrations to books and magazines. N.C.’s daughter Henriette took notice of Hurd and eventually married him. Hurd came to the Wyeth household looking to learn painting, but he also had something to teach—the technique of painting in egg tempera. A technique long out of favor since the Renaissance, tempera allowed Hurd to achieve amazingly powerful colors and a flatness oil paint resisted. Hurd’s The Rainy Season (above, from 1940)n shows just how beautifully tempera could be used for natural settings. N.C.’s youngest son, Andrew, took notice of Hurd’s unique technique and learned tempera from him, eventually creating masterpieces such as Christina's World in that medium. A fine painter in his own right, Hurd should also be remembered for the important role he played in the development of Andrew Wyeth’s art. Andrew painted in the painstaking technique of tempera to the very end of his life, perhaps thinking of the painting cowboy who came one day and changed his family’s life forever. 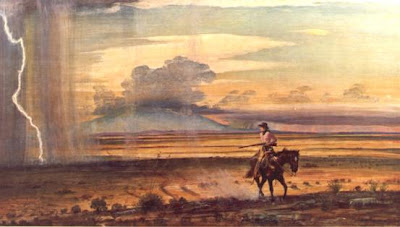 It’s amazing to think that Hurd truly was a cowboy in the sense of being able to do all the work of a ranch hand, yet could still paint in the most technically demanding fashion. After Peter and Henriette moved back to New Mexico, Peter agreed to play the role of Billy the Kid in the first local pageant now known as “The Last Escape of Billy the Kid,” which commemorates the outlaw’s daring escape from a local jail in 1881. Hurd’s The Last Escape of Billy the Kid (above, from 1940) provides his imaginative take on what that jailbreak must have looked like. The dynamic composition of the work shows the influence of N.C. Wyeth, who must have imparted some of his illustrator’s sensibility on his son-in-law. The streak of lightning cutting down through the left side of the picture balances out the shootist and his horse on the opposite side. You can almost feel The Kid’s anxiety as he strains to look backwards to see if anyone is pursuing him. The landscape behind Billy seems to swirl with the same sense of turmoil in Billy’s dark soul. 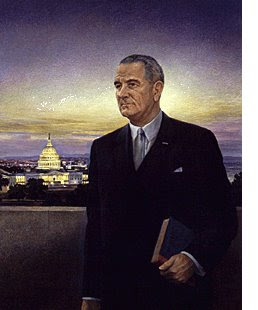 Of course, Hurd was much more than a cowboy, or a cowboy impersonator. Hurd painted several covers for TIME Magazine, including portraits of Lyndon Johnson and Duke Ellington, among others. In 1967, Hurd travelled to Washington, DC, to paint what was to be the official Presidential portrait of LBJ. Unfortunately, the impatient and embattled LBJ could sit only once for Hurd, who had to resort to working from photographs. Upon seeing the finished portrait (above), Johnson called it “the ugliest thing I ever saw.” Washington punsters soon quipped that “artists should be seen around the White House, but not Hurd.” (The National Portrait Gallery now displays the rejected portrait.) Despite that high-profile fiasco, Hurd made a successful living as an illustrator and fine arts painter, never cracking into the upper echelon of famous artists as the movement towards abstract art took over after the 1950s. Like Andrew Wyeth, Hurd fell victim to changing tastes but never gave up his first love for the land on which he was raised.

It is obvious that LBJ had poor judgement when it came to art.