I’d love to know what percentage of art-related calendars consist of the art of Norman Rockwell, Thomas Kinkade, and Ansel Adams. The number has to be staggering. Born February 20, 1902, Ansel Adams has become over the years the comfortable-as-an-easy-chair photographer of choice for many Americans the same way that Rockwell has become synonymous with Americana and Kinkade with kitsch. Images such as Adams’ Moonrise, Hernandez, New Mexico (above, from 1941) simply take your breath away with their composition and beauty. Black and white photography never seems archaic in Adams’ hands. The tonalities just leap out at you. Adams also had the ability to frame an image in such a way that it seemed unfamiliar yet recognizable—just changed enough to make you look at it with fresh eyes. Moonrise, Hernandez, New Mexico could almost serve as a pendant to the “Earthrise” photo taken by astronaut William Anders of the Apollo 8 mission that landed on the moon.
Unlike Alfred Stieglitz, Adams never resorted to distorting tricks to make his photographs more painterly, which was the ideal of much early photography. Instead, Adams pushed the technical limitations of photography to the brink ,experimenting with sharpened focus, increased contrast, different rates of exposure, different types of paper, and other darkroom magic to achieve realer-than-real images such as Winter Sunrise, the Sierra Nevada, from Lone Pine, California (above, from 1944). Adams helped further photography as a medium when he founded with Edward Weston the Group f/64, which eventually became the photography department of the MoMA. Thanks to Adams’ efforts, photography grew from a poor cousin to painting and the other accepted fine arts to a medium on equal standing. Adams’ work also preserved much of the natural beauty of the American west, particularly that of Yosemite National Park. Sadly, much of the actual land has been altered by climate changes, but at least we have Adams’ photographs to remind us of what once was and what we have lost. 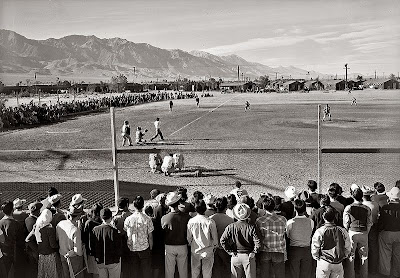 Other photographers, particularly Walker Evans and Dorothea Lange, are associated with the social injustices of the first half of the twentieth century in American, but Adams also belongs in that circle. When the U.S. government detained Japanese-Americans in camps after the attack on Pearl Harbor, Adams felt compelled to fight back with his camera. Adams visited the Manzanar War Relocation Center and took a series of photographs to demonstrate that these Japanese-Americans were “real” Americans, too. Adams faced heavy opposition (even Theodore Geisel, the future Dr. Seuss, drew cartoons questioning the loyalty of the Japanese-Americans), but he hoped that photographs such as Manzanar Baseball (above, from 1943) would change minds in a “See, they play baseball, too!” kind of way. Born Free and Equal: The Story of Loyal Japanese-Americans, the book that came out of this project, remains an almost-forgotten chapter of Adams career and certainly one that will never make it to the calendars. As with Norman Rockwell, we have grown too familiar with Ansel Adams and think we know him, but Adams has depths that we too often lose in his mountains.
Posted by Bob at 12:01 AM

What a great overview! I have thought the same about Adams's "clean" photography. His works rest so comfortably on their technical brilliance.

About my own "calendar-experience" with Ansel Adams: