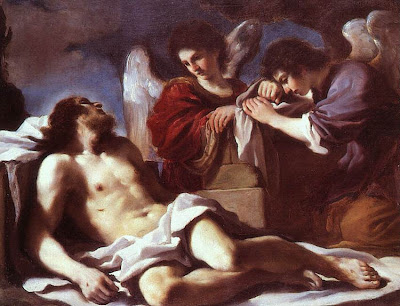 With the definite exception of Sodoma, Guercino may be the owner of the worst nickname in Western art history. Born February 8, 1591, Giovanni Francesco Barbieri earned the nickname “Guercino” or “squinty” in Italian because of his crossed eyes. Despite that infirmity, Guercino taught himself how to draw and paint and eventually came under the influence of Lodovico Carracci and his cousin, Annibale Carracci. The Getty Museum’s current exhibition Captured Emotions: Baroque Painting in Bologna, 1575-1725 and the companion catalogue (my review here) show how Guercino fit in with the Bolognese Baroque School with works such as Angels Weeping over the Dead Christ (above, from 1618) that portray the deep human, psychological drama of such subject matter. Guercino painted Angels Weeping over the Dead Christ on copper, which helped make the deathly pallor of the fallen Savior gleam with a special, pearly light. The angels mourning over Jesus’ body strike the perfect balance of supernatural and natural, allowing mortal viewers to empathize and join them in their grief. 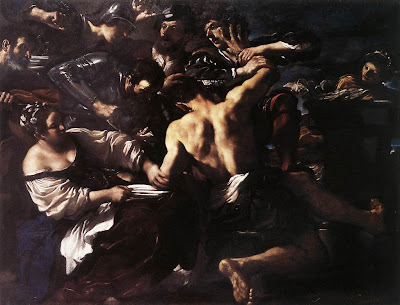 The Bolognese Baroque School always managed to keep some distance stylistically from the often overwhelming influence of their near contemporary, Caravaggio. Caravaggio revealed the incredible potential of chiaroscuro like no artist who had come before. Guercino and the Bolognese painters appreciated Caravaggio’s chiaroscuro but had less affection for the gritty realism of his works that would often use prostitutes to model the Virgin Mary. Guercino’s Samson Captured by the Philistines (above, from 1619) beautifully captures the power of Caravaggio-esque lights and darks to generate high drama, but the realism here never falls into the gutter. Stefano Pierguidi, in his essay, “The Naturalistic Strand in Bolognese Baroque Painting” in the Captured Emotions catalogue, sees the relationship between Guercino and Caravaggio as “a dialogue carried out at a chronological and geographical distance.” It’s entirely possible that Guercino knew Caravaggio only by reputation or by his influence on other artists when he painted Samson Captured by the Philistines, which makes Guercino’s ability to recreate the master’s special effects even more remarkable. 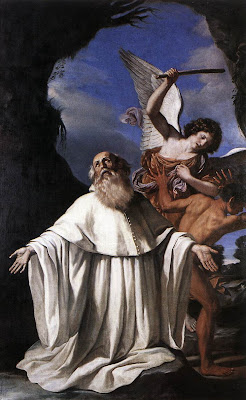 Whereas Caravaggio was reckless, perhaps mad character, Guercino was a stable, reliable artist. In 1621, Pope Gregory XV invited Guercino to Rome, where the artist began to amass a small fortune in commissions. A lightning-fast draftsman, Guercino completed he completed 106 large altarpieces in addition to more than 140 paintings in his lifetime. The official seal of approval from Gregory XV, however, tamed what few wild impulses Guercino inflused into his art. In the last stages of his career, Guercino turned to a controlled, classical style as seen in works such as Saint Romuald (above, from 1640). The saint’s stunningly white robe recalls the whiter-than-white whites of Bartolomeo Schedoni, a precursor to the Baroque style from the generation previous to Guercino’s. As much as I love the color and technique of Guercino’s Saint Romuald, I can’t help but miss the emotional connection earlier works such as Angels Weeping over the Dead Christ still make. Saint Romuald strikes a hokey pose of devotion that only the gleaming gown saves from complete triteness. The angel behind the saint belongs to an earlier time, before artists tried to humanize such beings. Perhaps it was only in his earlier days that Guercino saw the potential for his art clearly, before success and prestige narrowed his vision to that point that we have to squint to see his talent in the late works.
Posted by Bob at 12:01 AM

It's ironic that Caravaggio's painting is so much more formal, imagistic, cool and controlled than someone like Guercino's far more fluid, warmer, freely painterly mode. Given their respective temperaments, you'd think the opposite would be true. I'm thinking of the paintings of Pollock the bad boy vs. the work of Rothko the studious intellectual.
Thanks for the interesting thumbnails. Keep it up.