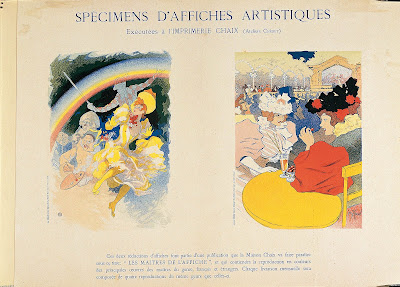 Assaulted by advertising images everywhere we look today, it’s hard to imagine a world not dominated by commercial imagery. The cartoonishly crowded look of ads plastered over every inch of racecars threatens to become the norm as America morphs into NASCAR nation. Advertising and Art: International Graphics from the affiche to Pop Art, edited by Claudio Salsi, helps us imagine a simpler time, when advertising art was just beginning to develop, and shows us how we got to where we are today. Delving into the mammoth print and poster collection of the Civica Raccolta delle Stampe “A. Bertarelli”, a team of Italian art historians trace the history of the advertising poster from the very beginning, starting with Jules Cheret,the “father” of the modern advertising poster. Cheret’s work (above) seems almost quaint by today’s brash standard, but it proved influential on more experimental graphic artists such as Henri de Toulouse-Lautrec. As Giovanna Ginex explains in her essay, by the end of the nineteenth century, “[p]oster design became a profession” with “specialist printing houses” and “cities changed their appearance, welcoming—more or less knowingly—advertising material in their ‘modern’ urban fashioning.” Thanks to Cheret and others, advertising art grew from a poorly regarded corner of the art world to a new, distinct outlet for visual expression vitally linked to everyday, commercial life. Advances in chromolithography removed the limitations of lithography, thus “leaving the artists’ prerogatives almost intact and rather bringing out their creativity,” Ginex asserts. The freedom to realize in reproduction almost anything they could paint attracts a new class of artists, including Alfons Mucha (above), who revolutionizes the look of the advertising poster, introducing elements of Art Nouveau into the common existence of European society and infecting every corner with a passion for that style so easily adapted to furniture, architecture, etc. Over time, the center of advertising visual innovation moves to Munich, where the Jugendstil branch of Art Nouveau flourishes. Thanks to the Raccolta Bertarelli’s vast collection to draw from, Advertising and Art supports each of its essays with a rich set of examples that show not only the well-known figures such as Mucha but also lesser-known but no less talented artists working in the field. These are commercials you don’t wish you could fast forward through. 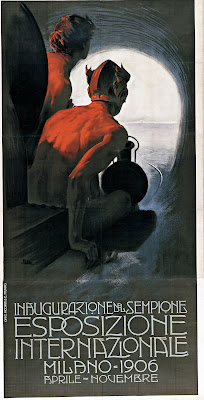 Much like early photography, early advertising found itself emulating the world of painting until it could develop a distinct language of its own. The work of Leopoldo Metlicovitz (above) shows how advertising art continued to resemble painting in terms of composition and style, perhaps even more so thanks to technological progress solving earlier problems in reproduction. At the same time, artists such as Leonetto Cappiello actively sought that new language for advertising. “The art of the poster has its own requirements and its own laws,” Cappiello said. “If the poster is good and successful, it is commercial and artistic, otherwise it is not a poster.” Giovanna Muri, in her essay on the poster’s development in the 1920s and 1930s, sees the influence of the Italian Futurists on the poster in a give and take process. “Futurist poetics.. not only used the means of advertising communication to promote the value of dynamism, progress, and technology, but also attributed a fundamental prominence to advertising as artistic experience,” Muri writes. Futurism lends only one of the many art dialects that merged into the larger language of advertising art taking shape in the first half of the twentieth century. 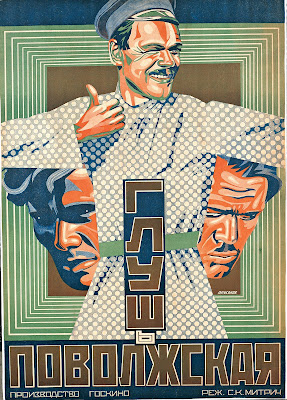 Nikolaj Petrovich Prusakov, The Calm Waters of the Volga, 1925.

Russian Constructivism and the vision of Alexander Rodchenko also played a role in the development of advertising art in Europe. When the new Russian cinema crossed Europe, it came twinned with equally new, striking advertising posters. Nikolaj Petrovich Prusakov’s poster for the film, The Calm Waters of the Volga (above, from 1925) stands as just one example of the new visual display of Russian Constructivism, which opened up another realm of possibility for advertising artists. In the 1920s a bevy of advertising-related specialist magazines emerged. Alessia Alberti examines in her essay the influence of those magazines on the industry and how they helped create the first advertising agencies as we know them today. Finally, the advertising world had finally broken free of the art world as a separate entity, yet it continued to borrow from the art world as the art world began to borrow from it. 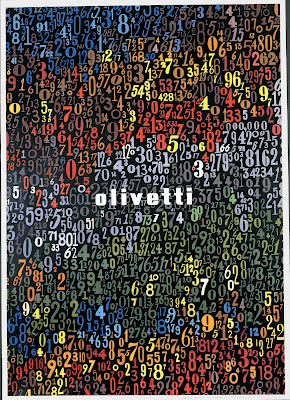 The years just before, during, and after World War II significantly changed the landscape of advertising art. As Anna Steiner points out in her essay on advertising from the 1930s to 1968, the techniques of Fascist and Nazi propaganda quickly crept into mainstream advertising imagery. “No strong difference was noticeable between advertising and cultural propaganda” after the war, Steiner writes. Members of the Bauhaus preached a new all-encompassing type of art that spread to America as Walter Gropius, Ludwig Mies van der Rohe, and others fled Nazi oppression and took up teaching jobs. Scientific research on human behavior reveals that certain colors such as red more effectively reach the eye, spurring artists such as Giovanni Pintori to sprinkle red among the other colors of his 1953 poster for Olivetti typewriters (above). New fonts such as Helvetica come on the scene and suddenly define the “look” of a generation. As advertising’s language not only grew up but eventually grew amazingly powerful, artists in the conventional art world took note. The Pop Art movement of Andy Warhol, Roy Lichtenstein, Richard Hamilton, and others all addressed how the advertising world intersected with the “real” world. “The real is not ‘realism,’” Francesco Tedeschi writes in his essay, “The Phantasm of Reality: Advertising in the Art of the 1960s,” “but consists in the iconosphere and in the landscape determined and produced by the social and sociological dimensions of a reality made of images, commodities, and consumptions. It is not a matter of seeking a language that speaks to the masses, but of appropriating the language of the society of mass consumption.” The relationship had finally come full circle. In less than a century, where advertising had once emulated art, art now emulated advertising for its connection to the “real,” and what that might actually mean. 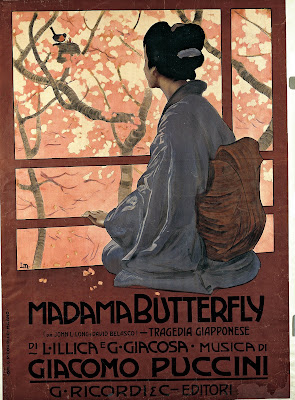 Advertising and Art provides a concise crash course in the development of advertising imagery over the last century. Part of me longs for the days of beautiful works such as Leopoldo Metlicovitz’s poster for the premier of Puccini’s Madama Butterfly in 1904 (above), but the eventual separation between mainstream art and a distinct sphere of advertising proved mutually beneficial to both parties. Today’s fast-paced, television-driven advertising world no longer places a priority on print campaigns, but Advertising and Art keeps its priorities straight and provides a straightforward assessment of the long, strange trip advertising art has taken in finding a voice of its own.

[Many thanks to Rizzoli for providing me with a review copy of Advertising and Art: International Graphics from the affiche to Pop Art and for the images from the book.]
Posted by Bob at 12:01 AM

Art Blog By Bob, Your blog were good. I thought you were also creative, because could make content was as good. You were willing to waste time and thoughts to dismiss this good idea.

Don't had stopped contributing your sparkling idea in this blog. I was convinced this blog really must be useful.

May you be successful …….