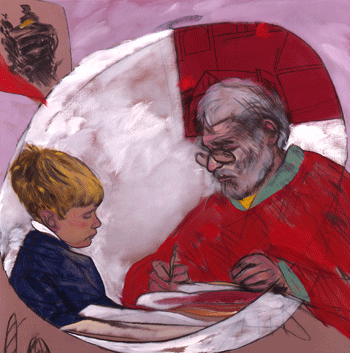 One of the most beautiful works of theology I’ve ever read is Martin Buber’s I and Thou. Buber believes that properly conducted human relationships inevitably lead to a fulfilling relationship with God. R.B. Kitaj commemorated Buber’s work in his painting I and Thou (above, from 1990-1992). Born October 29, 1932 in Ohio, Kitaj lived almost his entire adult life in England, becoming one of the most well-respected and beloved “artist’s artists” of the twentieth century. Kitaj lived the message of Buber’s signature work through his art, which always dealt with the workings of human interpersonal exchange not only on a personal level but on a larger, national, and even historical level, too. There’s never any sense of abstraction in Kitaj’s art, never “art for art’s sake.” Kitaj painted art for his and our sake. Delving into literature, philosophy, current events, and, of course, art history itself, Kitaj bridged the fractured elements of modern society in an attempt to make human life whole once more. 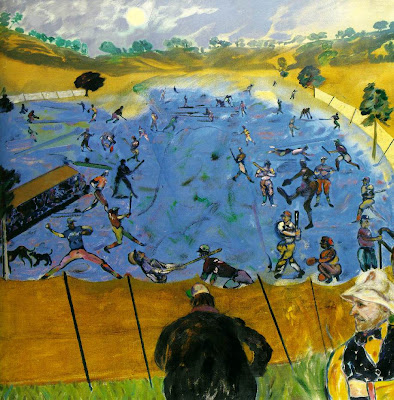 I’ve always been amazed that one of Kitaj’s closest friends was Francis Bacon. Although Bacon was much older, Kitaj found common ground with him in painting the modern psyche after the trauma of World War II. But whereas Bacon saw that world and concentrated on the horror, Kitaj saw the same horror and looked to temper it with humor and love. In Amerika (Baseball) (above, from 1983-1984), Kitaj alludes to the Franz Kafka novel of the same name yet simultaneously represents “America’s game” of baseball. By the middle of the twentieth century, baseball finally reflected all that America represented, finally allowing African-Americans to play professionally. A native American himself, Kitaj from his home in England could see the paradoxes of the American way more clearly at a distance, yet still inserted a playfulness into his social comment. 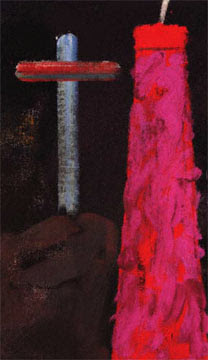 Kitaj always walked the fine line of the specific and the universal—the same fine line of Buber’s I and Thou. His Jewish heritage ensured that the Holocaust always remained in his consciousness, yet he didn’t want to take that tragedy and turn into something exclusive or tribal. Kitaj’s Passion (1940–45): Cross and Chimney (above, from 1985) brings together the Christian cross, the symbol of Jesus’ passion and death, and a simple chimney, the garish symbol of the fires of the Holocaust in which six million Jewish lives turned to ashes. Kitaj seems to say that nobody has cornered the market on victimhood. We’re all victims in some sense. Rather than take tragedy and divide into separate circles, we should use tragedy to unite as a common whole. I confess to a love of Kitaj’s work more for its literary allusiveness and symbolic power than for his technique as a painter, but the positive power of what Kitaj says rings louder to me through his paintings than any words alone, especially in a work such as his Passion above. Late in life, Kitaj often painted himself and his late wife as angels. In his life, Kitaj always tried to show us “the better angels of our nature,” whether we wanted to look or not.

I liked the contents of your posts here. I hope you would enjoy visiting my art blog.