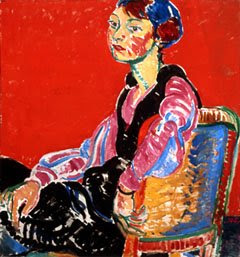 “I was twenty-one before I saw a good picture,” Sir Matthew Smith once said of his insular upbringing in the shadow of his pious, businessman father. Born October 22, 1879, Smith eventually resisted his father’s attempts to place him in the world of business and, despite ill health, willed himself into the world of art. In 1908, Smith traveled to France to study at the Slade, the art school run by Henri Matisse. Although he most likely didn’t study directly with Matisse, Matisse influenced the entire curriculum of the school. Smith’s Dulcie (above, from 1915) shows how he took the style of Matisse in his Fauvist days and adapted it to his own uses. The connection with Matisse opened up doors to Smith that allowed him to exhibit with the likes of Matisse, Kandinsky, Fernand Léger, and Georges Rouault all before World War I erupted and forced Smith to return to England. Because of this influence of Matisse, Smith seemed “more French than English” upon his return, according to one contemporary, in terms of his handling of color to elicit emotion. Smith neatly smuggled Matisse across the Channel and overnight opened the eyes of his countrymen to the next big thing in painting. 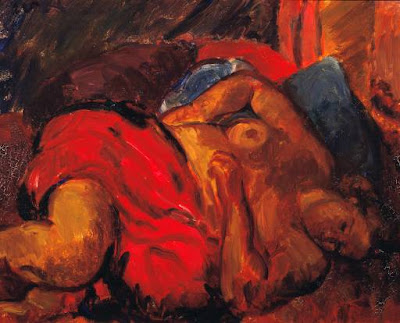 Within a few years of returning to England, Smith found himself drafted into the war. He suffered shrapnel wounds in combat that taxed his already frail health, but the experience of war exacted a greater toll on his mind, beginning a cycle of creativity alternating with depression that would plague the rest of his life. Smith eventually established a London studio near that of Walter Sickert, whose (in)famous “Camden Town” nudes set the standard for the nude form in English painting in the early twentieth century. In Model Turning (above, from 1924), Smith slowly turns away from Matisse’s influence and turns toward a style closer to that of Sickert’s. The red skirt and blue and purple cushions hark back to Fauvism, but the instability of the figure itself generated by the roughness of the brushwork is pure Sickert. Actually, Smith exceeds even Sickert’s penchant for molding the figure in color like a sculpture rather than through line. 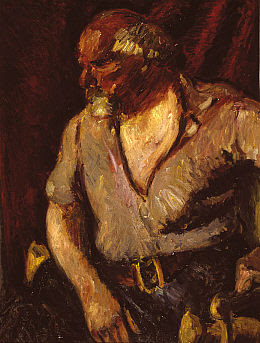 Smith continued to progress in a more Sickert-esque direction. In one of his many portraits of his friend and fellow painter Augustus John (above, from 1944), Smith handles the subject roughly. John referred to his portrait as “another hemorrhage for Matthew” in acknowledgment of the bloody, gory way Smith painted flesh even in the portraits of friends. As the pace of his cyclical depression increased, Smith’s view of life and humanity seemed to darken considerably. The young Francis Bacon admired Smith’s troubled style and patterned his own work after it. In many ways, Smith is the link between Sickert and Bacon, the two most important painters of the nude in English painting in the twentieth century. Smith’s evolution from Fauvism, one kind of beastliness, to the later brand of beastliness in his final works demonstrates how the late bloomer more than made up for lost time.

If you are lazy like me, then this service is for you. Quite recently, quite by chance, leafing through my browser, I saw an advertisement for a service like edu birdie. I am eternally grateful to this service, because it provides essay writing services. This site saves me so much time. I leave my order and while it is executed I can do what I want. Personally, I do my other homework in the meantime. Order completes a little more than an hour, but the quality of this essay is just awesome.

I may find out in my analysis that I do not order full works, but use the testing and editing service only. It is cheaper and still self-employed (well, almost). For nearly 7 months, I've been using edubirdie reviews and got used to it all. And the authors of the feature. I tried and couldn't list them all.) By the way, I did. My peers have already begun to use them as they have been jealous that my essays are better. I therefore believe that the site deserves its acknowledgment and support