Putting on a Show 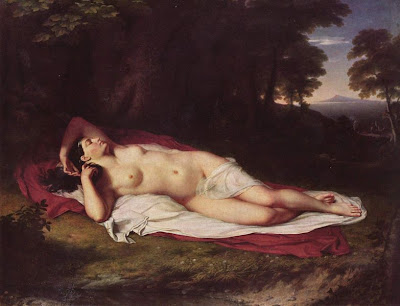 When American artist John Vanderlyn traveled to study art in France in 1796, thanks to the patronage of Aaron Burr, he came back five years later with a style of draftsmanship that few other American artists could match. Born October 15, 1775, Vanderlyn brought back French draftsmanship and, more importantly, the French appreciation for the bravura nude back with him. Vanderlyn’s Ariadne in Naxos (above, from 1808-1812) shocked American audiences at the time, even with the convention of casting the figure as a classical nude rather than a living, breathing, contemporary nude. When you see Vanderlyn’s pin-up girl today at the PAFA sticking out like a sore thumb amongst its contemporaries and their more family-oriented subject matter, you get a sense of just how shocking Ariadne must have been. To a young country with a strong Puritan sensibility, a barely formed art tradition of its own, and little exposure to the art tradition of European history (the great American museums and their European collections were almost century away), Vanderlyn’s nude seemed alien and, literally, foreign. To his credit, Vanderlyn rolled the dice, risked his still growing career as a portraitist, and won. 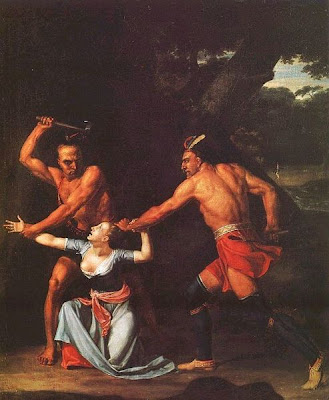 Unfortunately, Vanderlyn soon aimed more at his audience’s tastes rather than at edifying works of art. The Death of Jane McCrea (above, from 1804) shows painterly propaganda at its worst. Vanderlyn paints here the story of Jane McCrea, a young American woman allegedly murdered in 1777 by Iroquois working for the British during the American Revolutionary War. Vanderlyn shows the cruel tribesmen at the fateful moment when they claim the scalp of the long-haired maiden. Playing to anti-Native American feelings, lingering resentment against the British, and ancient chivalric codes all at once, Vanderlyn struck a chord with his contemporary American audience, giving them exactly what they wanted to fit in with their prejudices. (Ms. McCrea’s exposed cleavage no doubt titillated male audiences, too.) Colonial rebel organizers used the story of Jane McCrea to rouse citizens into fighting the British more fervently during the Revolution. Vanderlyn no doubt knew that history and hoped to capitalize on repeating it for a new generation.

For most of the rest of his career, Vanderlyn painted huge panoramic works that he showed to the public for a charge. His Panoramic View of the Palace and Gardens of Versailles (above, from 1818–1819) was the iMAX theater of its day, providing thrills to Americans who only knew of Europe’s great palaces and cities from descriptions in books. Aside from those show pieces (which turned a poor profit for the slow-working artist), Vanderlyn continued to cultivate connections within the United States government, carefully leaving his ties to the disgraced Aaron Burr in the past. Presidents James Monroe, Andrew Jackson, and Zachary Taylor all sat for portraits by Vanderlyn. In 1842, thanks to high-placed connections, Vanderlyn received a commission from the U.S. Congress to paint a scene of Christopher Columbus’ discovery of the new world. Pressed for time and plagued by declining skills, Vanderlyn outsourced the job to another artist. Although the Native Americans cowering at Columbus’ feet in the finished work in the U.S. Capitol Rotunda could belong to Vanderlyn, they most likely don’t. A decade later, Vanderlyn died in obscurity, far from the crowds he longed to attract.