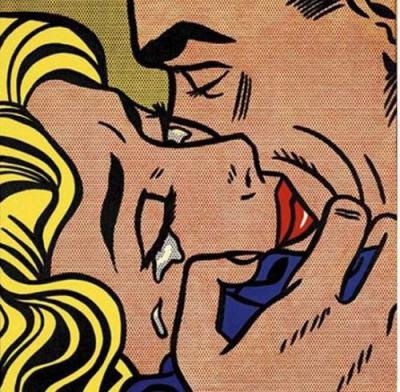 "I bet you can't paint as good as that, eh, Dad?" Roy Lichtenstein’s young son challenged him lightheartedly in 1961 while pointing at a Mickey Mouse comic book. Born October 27, 1923, Lichtenstein probably paused for a moment and summed up his life. Thirty-seven years old, working in a dead-end teaching job, surrounded by paintings he couldn’t sell, Lichtenstein’s life as an artist seemed doomed. Why not?, Lichtenstein thought, and began to copy the Benday dot pattern of the comic book and produced Look Mickey, the first of his Pop art works that would soon become his signature style. Within three years, Lichtenstein tasted success beyond his wildest dreams, selling works such as Kiss V (above, from 1964) for ridiculous sums. Although he always denied he copied directly from actual comic books, especially the romance and war comics popular in the early 1960s, Lichtenstein’s mimicking of the work of comic book artists always seemed like stealing on some level, perhaps even to him. Copying the comics was the point of his work—the ironic spice that gave them the flavor hip collectors couldn’t resist. Yet, the painter Lichtenstein wanted to become before his son’s challenge never materialized, always overshadowed by the successful painter he actually became. 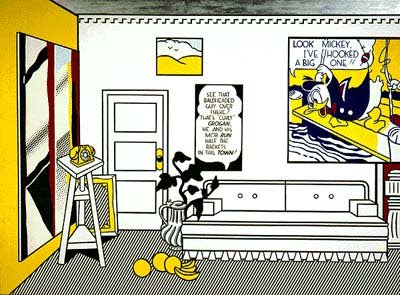 Lichtenstein enjoyed a relatively short period of profitable productivity, giving up the copying of comic panels after just 5 years in 1965. By then, the damage had already been done. The expectations of gallery owners and collectors was set in stone. A “Lichtenstein” equaled a comic book-style work, and nothing else. In the 1970s, Lichtenstein painted a series of works titled the Artist’s Studio. In Artist's Studio No. 1 (Look Mickey) (above, from 1973), Lichtenstein paints the work that started it all in the background of a Lichtenstein-styled studio composed entirely of those maddening Benday dots. No matter how much he wanted to escape, those dots pursued him. Even after doors of the swinging Sixties swung closed, Lichtenstein couldn’t break through into a new style. An artists such as Picasso changed styles like some people change their underwear, but Lichtenstein clung to the style that made him famous, even long after it had served its purpose. 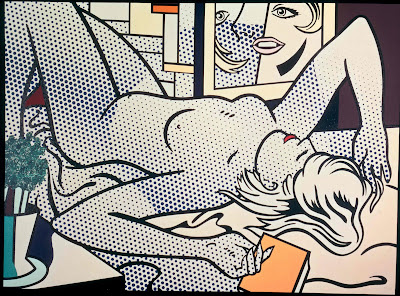 Lichtenstein died in 1997, still painting Benday dots and still trying to escape. Lichtenstein’s Nude with Abstract Painting (above, from 1994) shows a Matisse-like nude sprawled across the canvas with an abstract painting hanging on the wall behind her. Alas, all hope of drawing closer to Matisse’s free style drowns under the ever-present sea of dots. Where Lichtenstein once sought to parody the excesses of comic book style, he now self-parodied the excesses of his own wearied style even as he nodded in the direction of another master who, like Picasso, enjoyed a chameleon-like career in painting. Lichtenstein certainly isn’t the only artist who found his niche and rode it into the ground. However, unlike those other artists, Lichtenstein’s niche was never truly his own. In the end, Lichtenstein struck a Faustian bargain in exchanging his personal creative vision and soul for the riches and fame he thought were what he really wanted from art.

I don't know what the heck you are talking about, Bob. Lichtenstein's achievement was very great, and he certainly didn't atrophy into repetition of a single idea-- on the contrary-- he found enormous formal and expressive power with the forms he adopted from popular media. Are you drawing this "tale of woe" version of him from some source in particular? Is there a document out there somewhere wherein he confesses the disappointment you claim? If so I'd like to know-- maybe he did say something like that at some point (seriously, please point me to the source), but, respectfully, the idea that he was a hack or a one-trick pony is ludicrous. I'm very disappointed to read this post!