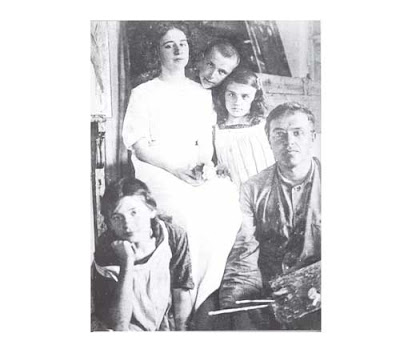 Fleeing the turmoil of the 1917 Russian Revolution, David Burliuk, the “Father of Russian Futurism,” gathered together his family (above) and set his sights on the safety of the United States. Unable to emigrate directly to America, however, Burliuk first moved to Siberia and then to Japan. While in Japan, Burliuk exhibited his work to a Japanese audience that had never seen firsthand modern European painting or a modern painter such as Burliuk. Michael Craig and Copernicus Films examine this strange interlude in the artist’s exodus in the film David Burliuk and the Japanese Avant-garde. Craig examines both Burliuk’s influence on the Japanese avant-garde as well as the influence of Japanese art and culture on Burliuk himself. Burliuk arrived in Japan just as that closed culture began to open itself up to the ideas of the West. For Japanese artists coming to grips with a world shifting beneath their feet, Burliuk provided an example of how to steady yourself and find a new place in an uncertain, new world. 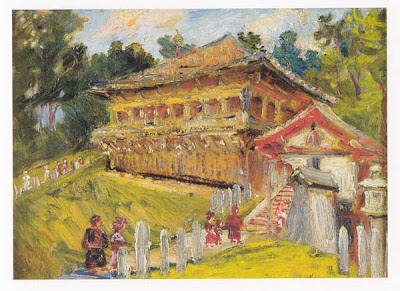 Unlike Craig’s other films in his series on the Russian avant-garde, such as Alexander Rodchenko and the Russian Avant-garde (reviewed here) and Architecture and the Russian Avant-garde (reviewed here), David Burliuk and the Japanese Avant-garde leaves Russia and the Russian Revolution’s aftershocks behind for the relative calm of Japan. Burliuk found great success in Japan, beginning with his exhibition titled “The First Exhibition of Russian Painting in Japan.” A member of Japan’s imperial family came to the show and even bought one of Burliuk’s paintings. As Japan got to know Burliuk and Futurism, Burliuk engaged himself fully with the subtleties of Japanese culture and art. Burliuk’s cultural immersion results in almost Impressionistic works such as his Kyoto Temple (above) that departed radically from the more radical style his new Japanese audience knew him best for. Like so many European artists fascinated with Japonisme who incorporated that style into their art, Burliuk internalized the Japanese art surrounding him but even more so by seeing it fully in context and not through prints and paintings alone. The footage of modern day Japan in all its colorful vibrancy makes it clear just how powerful an effect it could have on the artistic imagination of someone as open to new experiences as Burliuk. 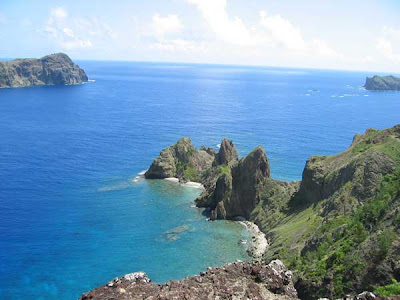 Of all the nineteenth century artists who adapted Japonisme to their art, Paul Gauguin inspired Burliuk the most. When Burliuk took his family to a vacation on the island of Ogasawara, the Japanese equivalent of Hawaii, Burliuk recreated the pilgrimage of Gauguin to Tahiti that freed Gauguin’s artistic soul. Burliuk traveled all over Ogasawara in search of beautiful vistas to paint (above). In addition, Burliuk learned Japanese by speaking with the local fishermen and came to appreciate their simple way of life. For me, the section showing the beauty of Ogasawara was the highlight of the film. Craig and company capture all the magic of that tropical paradise visually while the narration fully connects the love triangle formed between Burliuk, Gauguin, and Ogasawara. After painting on the island for several months, Burliuk returned to mainland Japan and exhibited his landscapes, which surprised and, sometimes, disappointed audiences expecting more Futurism from the touted “Father of Russian Futurism.” However, Craig calls this period in Burliuk’s career “a summing up of where he’d been” and “a step back to step forward.” Reenergized and refocused by his island idyll, Burliuk rediscoved the social purpose of his art in Japan just before leaving for America. As the Japanese translator of Burliuk’s writings notes in the film, Burliuk’s early books written in Russia seem heavily weighted with the gloom of political events, whereas the books written during his stay in Japan shine with a sunny view of the future. Titling one of those Japanese books “What Is Futurism? An Answer,” Burliuk seemed confident that answers did indeed exist in a rational world. 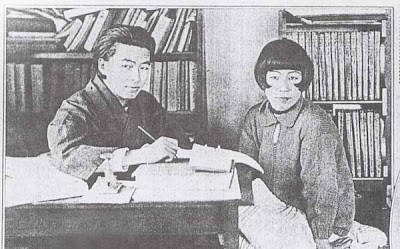 Japanese artists such as Tomoyoshi Murayama (shown above with his wife) and Kinoshita Shuichiro took Burliuk’s answers and tried to translate them into a language that could address their cultural concerns. Craig succinctly yet compellingly outlines the social situation of Japan between the wars as a nation with an identity crisis, caught between an ancient insular tradition and the pressing need to join the rest of the globe. Young Japanese artists following Burliuk’s example soon came into conflict with the established Japanese art world. Like the Russian avant-garde, the Japanese avant-garde viewed art as a means of social revolution and used technology as the means of combining commerce and art. The Great Kantō earthquake of 1923 that devastated Tokyo provided these young artists with an opportunity to remake the rebuilt city in a modern way to reflect the next stage of Japanese culture and society. Using archival footage, Craig and company recreate that moment in Japanese history when old and new clashed and avant-garde art stood at the center of it all. 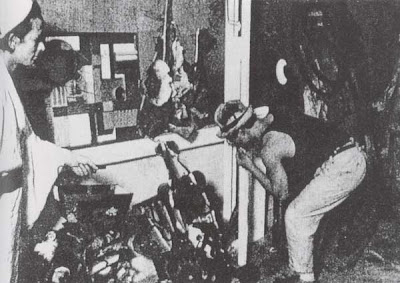 To Western eyes, Asian art often seems a monolithic parade of ancient styles endlessly recycled. David Burliuk and the Japanese Avant-garde reveals how the same concerns that rocked European societies also unsettled the Asian world. Burliuk’s travels allowed him to cross-pollinate the Japanese avant-garde with the earlier example of Russia’s progressive art movement. After Burliuk sparked Japanese artists into action, they set a raging bonfire of activity, including the Sanaka Exhibition (above) as well as forays into theater and dance that modernized the ancient traditions of Kabuki and Noh. A visually amazing film as well as a whirlwind tour through early Japanese modern art and the life of David Burliuk, David Burliuk and the Japanese Avant-garde will set you off on your own voyage of discovery to learn more about this amazing crossing of paths.

[Many thanks to Michael Craig and Copernicus Films for providing me with a review copy of David Burliuk and the Japanese Avant-garde and for the images from the film.]